‘Fantastic Four’ gets dumb and dumber 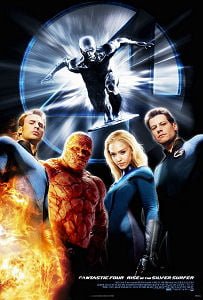 Comic book adaptations, and especially Marvel characters, have been assaulting the box office for a few years now, and they haven’t done too badly for themselves. Of course for every success there seems to be more than enough failures, and so far 2007 has been a less than spectacular year for our comic book heroes. Fantastic Four: Rise of the Silver Surfer just happens to be the most ridiculous Marvel adaptation yet, and a new low for big budget comic book films (although Spawn is still pretty damn low).

Rise of the Silver Surfer picks up where the last film left off, with Reed Richards (Ioan Gruffudd) and his crew of super freaks fighting crime and playing with expensive looking gadgets. Reed can twist his body up like an elastic, Sue Storm (Jessica Alba) can turn invisible and generate force fields, Johnny Storm (Chris Evans) can make flames cover his body, and Ben Grimm (Michael Chiklis) had his body turn into solid stone.

Things get rolling with the media swooning over Reed and Sue as they try to tie the knot. Too bad for them that a new threat, namely the Silver Surfer, has suddenly appeared and it looks like he’s trying to destroy the world.

If you saw the first film you can hardly expect much from the sequel, but in comparison there are a few improvements. The story doesn’t wander so much, the film is just a bit shorter, and Evans and Chiklis lend more than enough comic relief. I’ll also grudgingly admit that the cast as a whole isn’t too bad, they’re just poorly directed and working on a very, very weak script. (Julian McMahon also returns as Victor Von Doom – surprise – and Laurence Fishburne provides the very cool voice of Norrin Radd, the Silver Surfer.) 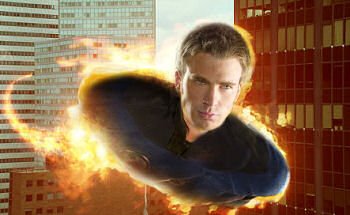 To be fair to the whole popcorn genre I can definitely ignore the awful dialogue, the weak characters, and even the lack of a decent concept. That’s the easy part. The trouble is that even if you just judge the film as an action film it’s no good. It’s bland, lacks any real momentum, the fight sequences are weak, and some of the biggest scenes lack the kind of oomph you expect from an action film.

Plus, the whole film comes across as an extended Saturday Night Live skit that’s gone on too long.

However I’ll warn you now, my biggest problem is actually kind of a spoiler. I’ve decided to throw out my usual rule book and just rip apart what turned into the worst thing about Rise of the Silver Surfer.

The problem was that they turned one of the most unbeatable, gigantic, and remarkable villains into an utter joke that didn’t even seem that threatening. I simply can’t forgive director Tim Story and his team for using the name Galactus for their big villain and then barely doing the character any justice and making the ending utterly anti-climactic.

In the world of comic books Galactus was a major player who kept coming back to destroy entire worlds at a time, and he had his eye on Earth a few times. But the important thing to note was that he was this massive creature that was the size of a few planets put together. For some insane reason this threatening, kind of funky looking guy was ditched in this film in favour of something simple though.

Instead of an incredible giant coming to destroy Earth, what do we get? A pissed off cloud. That’s right – the sentient creature launching itself through space is really just a galactic thunder storm and apparently he’s going to rain on us until we’re too damp to fight back.

Now, I understand that a giant man flying through space might look stupid, or maybe just hard to imagine that it could destroy the planet, but you can be damn sure that when it comes time to fight something that size, it going to look pretty cool. By comparison, how do you fight a cloud exactly? Well, leave it to the Silver Surfer – he does something or other and then it’s over, but you can hardly call it a fight.

If you’re a fan of the Silver Surfer you might get something out of seeing this film, especially since they seem to have tossed everything else away for the possibility of a new Surfer franchise. My advice though is to save your money and see any of the other films coming out in the weeks to come. They’re bound to at least be marginally better than this, and best of all, I bet they don’t feature any malevolent clouds bent on world destruction.

>> Please note that I incorrectly referred to Galactus as a robot originally in this review.