Rachel Skarsten is one of the kindest, smartest and most interesting people I’ve been lucky enough to interview. When I recently spoke to her over Skype from her home in Los Angeles, she was relaxed and very, very funny.

Skarsten is also very easy to interview because her career, and her whole resume, are both very impressive.

Since she was first discovered, Skarsten has starred in numerous television series, films, and maybe most interesting of all, on top of her numerous acting credits, she holds not one but two university degrees in English Literature and Classical Studies from Queens University.

As her most recent starring role ends this year–with the final season of Lost Girl drawing to a close with her character, Tamsin, taking on a pivotal role in the story–this Friday, Skarsten will be making a big appearance around the world as 50 Shades of Grey debuts in theatres, and Skarsten plays the part of Andrea, lead-character Christian Grey’s personal assistant.

Before we got to chat about 50 Shades of Grey, Skarsten was immediately happy to talk about Lost Girl, and even how surprised she was by the final season and Tamsin’s integral part in it.

“That honestly came as a bit of a surprise to me because I really was only in half of the fourth season and I had talked to the writers going into the final season and they kind of asked me what I wanted for Tamsin, and we kind of talked about that, but they never really said to me ‘Oh, by the way, you’re going to be kind of taking on not only your own role, but in a way stepping into that space that Ksenia [Solo] filled in terms of Anna [Silk]’s buddy-pal,’ you know? Right out of the gate it was just like working every day, and all that. But it was really nice. I felt like they gave me everything that I said that I wanted, which I didn’t think was possible because they were two sort of conflicting things–two different directions–and I love that show. I loved being there. It’s like going to camp.”

The bigger news for Skarsten these days, however, is her role in 50 Shades of Grey, and the reality of that film–and its scale–is still sinking in for her.

“I think I still don’t really understand the magnitude of it,” Skarsten said. “Although since I’ve gotten to L.A., and there’s like posters shellacked over people’s windows… and it’s sort of like, before I got the film, I’ve been very aware of this cultural phenomenon of 50 Shades of Grey, but I never really associate myself with it. And so, even now, I’ll see these posters and I’ll be like, ‘50 Shades of… Oh, I’m in that!'”

Skarsten’s other news is a bit more personal, in a way. Following a connection that she made with Suetables.com founder and designer Sue Henderson, Skarsten worked with the company to create a custom signet ring in honour of her role in 50 Shades of Grey, but it really is all about celebrating her roots in Canada, and how she has grown from here.

The “50 Shades of Rachel” ring is available in sterling silver and white or yellow gold, and is marked by a bold tree with a small maple leaf on it. The leaf can be set with one of 12 birthstone “shades”, and represents “roots, growth, success and reaching for light”–which seems to sum up Skarsten very well.

Watch the interview to see Rachel Skarsten talk about Lost Girl, her role as Andrea in 50 Shades of Grey, and her signet ring, and what they all mean to her. You will even get a glimpse into her home, which she’s just getting settled back into after a busy few months.

The final eight episodes of Lost Girl season 5 will air this fall on Showcase in Canada and on SyFy in the United States. 50 Shades of Grey opens in theatres this Friday, February 13, and the “50 Shades of Rachel” signet ring is available now from Suetables.com for $249.00 in sterling silver, and $1395 in 10K white or yellow gold. 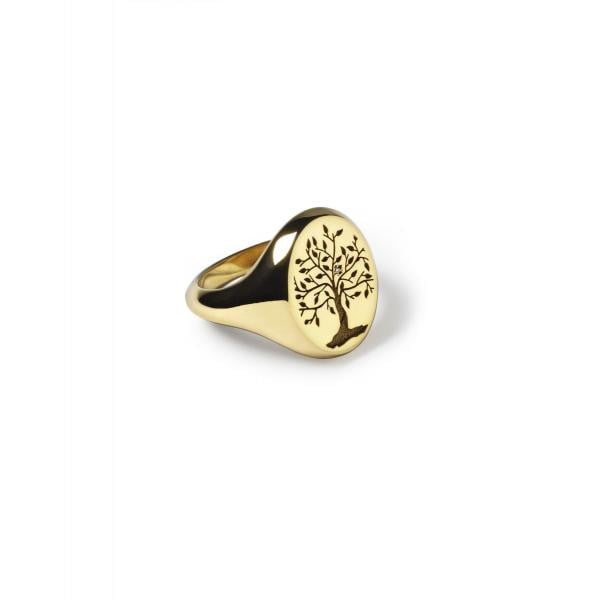 50 Shades of Rachel ring from Suetables