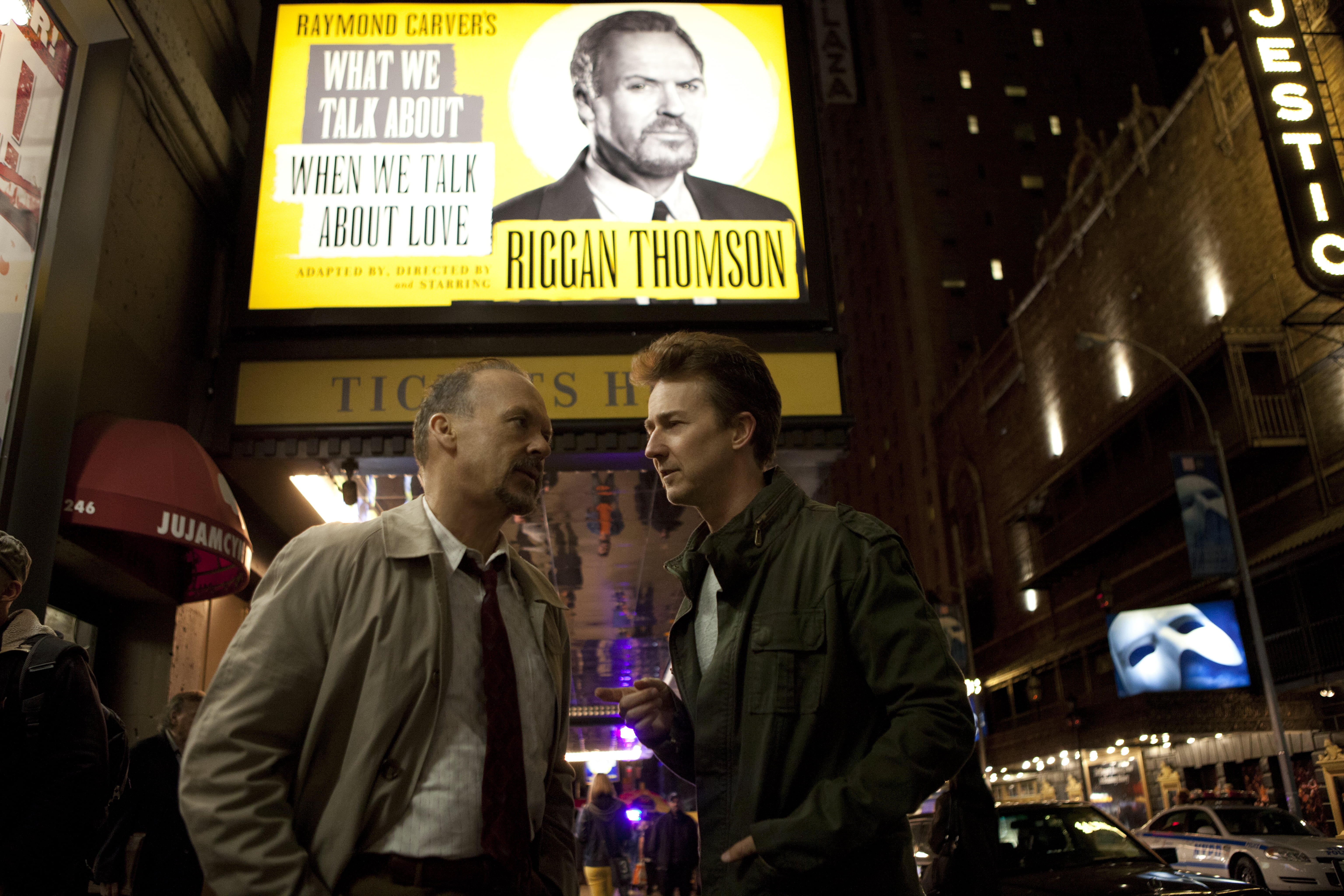 Oscar gold or not, Alejandro González Iñárritu is an incredible director. He is a visceral, ingenious artist with a strong vision and voice, both in terms of his direction and style, and his scripts.

The problem I have with Birdman or (The Unexpected Virtue of Ignorance) is that it’s a satire that dwells in a space we know all too well: a Hollywood star who is looking for meaning after years of success. It’s a cliche that works in this satirical form, but still feels cliched all the same, and it’s dense and miserable at almost every step, even when star Michael Keaton, as Riggan Thomson, runs through Times Square in his underwear.

And it’s right there in the title. What other film could possibly be called “Birdman or (The Unexpected Virtue of Ignorance)“?

Not just Birdman. Oh, no. Satire like this needs to splash the density of the dialogue right up there in the title too, and you will feel the oppressive nature of that satire from the first frame, as Riggan levitates in his dressing room.

Let’s get back to the good stuff though, because ultimately this is challenging cinema at its best, and that’s why it is worth watching, at least once.

Riggan is the former star of the “Birdman” blockbuster films, and all these years later, the former massive star is still haunted by the disembodied voice of himself as Birdman. Birdman is Riggan’s inner critic, following him, and perhaps even part of the reason Riggan imagines that he can levitate, fly, and move objects with his own mind. He is, after all, enlightened, but burdened by Birdman.

Leaving the glory days behind, Riggan is trying to now find meaning in his life on Broadway, and prove himself once again, where he has written and is directing and starring in a major adaptation of Raymond Carver’s story “What We Talk About When We Talk About Love”. Riggan just can’t seem to get a break though as everything goes wrong leading into his debut week.

When Riggan replaces his co-star with Mike, played by a scene-stealing and ultimately equally scenery-chewing Edward Norton, things get out of control as Mike seems to do his best to continually prove that he’s either unbalanced, or trying to find a way to derail Riggan’s show. 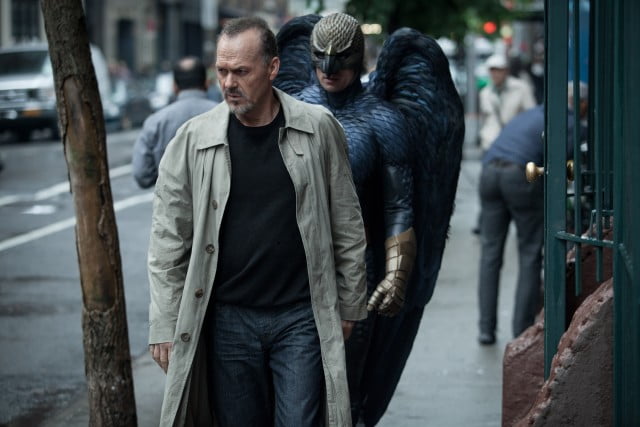 In the sidelines of the play is Riggan’s friend and lawyer Jake, played by an almost unrecognizable Zach Galifianakis, Riggan’s girlfriend Laura (Andrea Riseborough), Naomi Watts as the play’s lead actress Lesley, and Riggan’s daughter Sam, played by a brooding Emma Stone.

As Riggan fights to keep his play from falling apart, we follow his inner struggle to keep himself from going off the rails with the constant turmoil of Birdman goading the actor through his life. It’s a dark and terrible glimpse into what I cam only imagine some forms of depression must seem like, but the satire is what keeps the film from flailing into oppressive Black Swan territory, either for good or bad.

For the most part, my first big problem with Birdman is the running time. This film could practically be a short, in terms of the story, but at just under 2 hours, Birdman is a daunting gauntlet that felt long-winded, although perhaps not bloated, since the actors are so perfectly cast and generally enjoyable.

Despite the script and dialogue, and any other issues you might have with the running time, the cast kept me glued to the screen, and it’s hard to imagine more perfect stars than Keaton, Galifianakis, Norton and Stone. They are the film’s heart and soul, and they lift every moment. Keaton is wild and inventive, and the role suits his own life’s story in many ways, while Norton takes a sort of flight of his own in Birdman, making Mike every director’s worst nightmare in the most incredible and repulsive ways possible.

Aside from Iñárritu’s deftly-handled satire, cinematographer Emmanuel Lubezki makes every moment look absolutely perfect, especially when Riggan takes flight, but even in the dark confines of his dressing room, or on stage. Considering the range of the spaces, and the fact that the film was made to look like it’s one long shot, Lubezki deserves serious credit for what he accomplished here. The film’s wandering eye is beautiful art, scene to scene.

This praise is what ultimately matters the most, because the film has earned almost universal praise from critics since it was released, but it is a hard watch, and mainstream audiences will likely have a hard time with the density and sometimes poorly-written dialogue. It’s also not the kind of film that requires repeat viewings. In fact, having seen it once, I doubt I will watch it again for a very long time, but that does not diminish the art of the film.

There is really no denying the art and expertise on display in Birdman, but that does not change the fact that most people will have a hard time enjoying it.

Special Features:
There are three features for anyone watching the Blu-ray who want to delve a little deeper. The longest is “Birdman: All Access”, which is over 30 minutes of behind-the-scenes footage with Iñárritu and the talent and crew. “A Conversation with Michael Keaton and Alejandro G. Iñárritu” is 14 minutes and is pretty much what it says it is–a conversation between the actor and director about the film’s experience. Finally, there’s a gallery of on set photos, “Chivo’s On Set Photography” which is really as long as you want it to be, but also a really beautiful, iconic look at the film’s making. 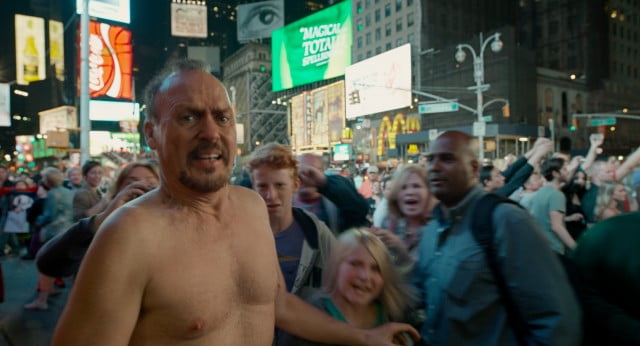 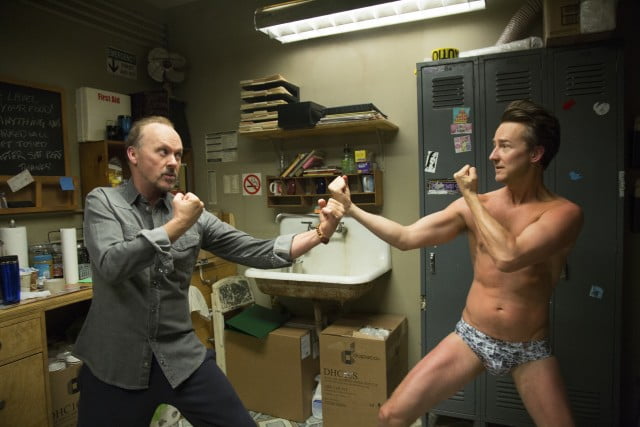