Dark ride for Harry in ‘Phoenix’ 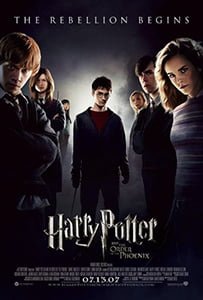 Harry Potter is growing up it seems, just like the young readers who have been following his adventures over the last ten years. In the latest film chapter, Harry Potter and the Order of the Phoenix, we get a darker, adolescent tale about the ever-deepening battle lines being drawn up between the good wizards and the bad. On the one side we have young Harry Potter trying to come to grips with his emotions and the troubles of his young life, and on the other we have Lord Voldemort creating trouble for Harry, fighting to destroy him, and trying to destroy the wizarding world’s way of life.

Daniel Radcliffe returns in this fifth film to play Harry Potter, and he takes hold of every anguished moment in the script and relishes in it. As the story has gotten darker and darker, the films have adapted nicely to the atmosphere and let Radcliffe and crew wallow in it.

At the start of the film we have Harry in one of those darker moods, regretting the death of Cedric Diggory in the last film, as two Dementors come after him in the middle of summer vacation at the Dursley’s. Harry manages to work his magic and scare them away, but his actions lead him back to London a little early as the Ministry of Magic threatens to kick him out of Hogwarts School of Magic for using a spell in front of his cousin Dudley.

But Harry finds out that the worst problem facing him now is that no one believes that Lord Voldemort (a menacing Ralph Fiennes) is really back. The wizard newspaper is calling him a liar, and even the Minister of Magic thinks Harry is just a pawn in a larger plot to take over the Ministry.

From the point of view of any Harry Potter fan, the story is largely intact, but there can be no missing the number of scenes, and characters, who have been cut or cut back. In the book we had a lot more chapters devoted to Dumbledore’s Army, how they formed, and all the events that surround the Order of the Phoenix. Compared to the book, Kreacher the house elf has but one scene in the film, Tonks (played perfectly by Natalia Tena) has only a couple of key appearances, and Bellatrix Lestrange (who gets crazied up a bit by Helena Bonham Carter) even gets cut down a bit in one of the key scenes. 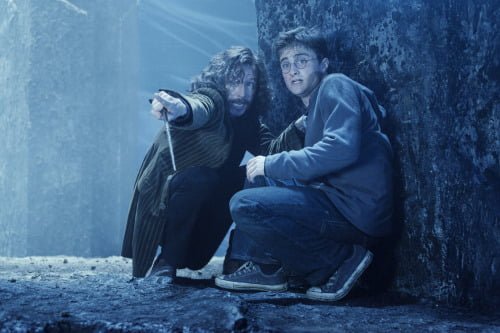 All told, this is a slimmer, quicker, and darker Harry Potter story that benefits from a director who wants to focus on the story’s one key idea: Harry feels like he’s alone and abandoned. The film may end up seeming a bit disjointed at times, but that concept and the whole execution by director David Yates is a compelling one. He managed to inject a lot of personality and heart into the breadth of the entire film. I still miss many of the scenes that were cut, and I think they all added character to the story, but I’m willing to admit that it’s nice to have a film that’s just barely over two hours for a change, and doesn’t suffer from too many side-plots.

The other bright side of Order of the Phoenix is that we have an abundance of spectacular performances. The great Imelda Staunton plays the demented Dolores Umbridge to perfection, and brings out every nasty detail of the character. Evanna Lynch is a dead-on Luna Lovegood, and injects all the heart and soul you could ask for. Film regulars Emma Watson, as Hermione Granger; Rupert Grint as Ron Weasley; and Michael Gambon as Albus Dumbledore; all bring all the wit, and energy that we’ve come to expect from these key characters. And Radcliffe is perhaps even better than before with the chance to play this truly troubled Harry Potter.

By this point in the series author J.K. Rowling had perfected her narrative, and created a compelling storyline to weave her tale. She may not be our century’s greatest author, but the Harry Potter franchise is still one of the most enjoyable reads to come out in years, and it stays consistently readable throughout the entire series. On screen her characters have been rendered very well, the story is well-paced, and I already know I need to see this film a few more times before I’ll be satisfied I’ve seen it enough. (About the only thing I’m left hoping for is a few of those cut scenes to make an appearance on the eventual DVD release.)

Since this month is a perfectly orchestrated perfect storm of Harry-osity, what with the film hitting theatres this week, and the final book coming out the end of next week (Harry Potter and the Deathly Hallows), there’s really no escaping Harry Potter in July.