Lara Croft returns in Tomb Raider, a reboot that takes us back to the roots of Lara’s adventures, with Alicia Vikander playing a near-perfect, young Lara Croft.

Unfortunately, Tomb Raider is not a near-perfect film. It’s a straight-forward adventure down a rabbit-hole that involves a forgotten Japenese monarch, and while the action is great, the script is weak, and some of the special effects look unfinished and unconvincing.

The story starts seven years ago when Lara’s father, Lord Richard Croft (Dominic West), vanished on a personal mission to find the resting place of Himiko. Himiko is a legend, said to hold the power of death in her hand, and Lara’s father worries that if her tomb is discovered by the wrong people, it could lead to a catastrophe.

When he doesn’t return, and after sending fruitless search parties for him, everyone assumes that he’s dead, and Lara is left with the responsibility of taking over her father’s company and claiming her inheritance. But Lara is not willing to accept her father’s death and sets out to find the truth about what happened to him. She’s lived the last few years making a living for herself without the family fortune–as a bike courier–and it’s only through urging that she nearly accepts her father’s death. One clue leads her to her father’s stash of research though, and while a message warns her to destroy the information, to protect the world from Himiko’s curse, Lara uses the clues to look for her father.

Lu Ren (Daniel Wu)–a boat captain in Hong Kong, whose father went missing seven years ago when he took Lara’s father out looking for the secret island–gets roped into taking Lara to her tomb. Arriving at the island though, they run into disaster and get taken captive by Mathias Vogel (Walton Goggins), an archeologist who is also hunting for Himiko, and intends to use Lara to get his prize. 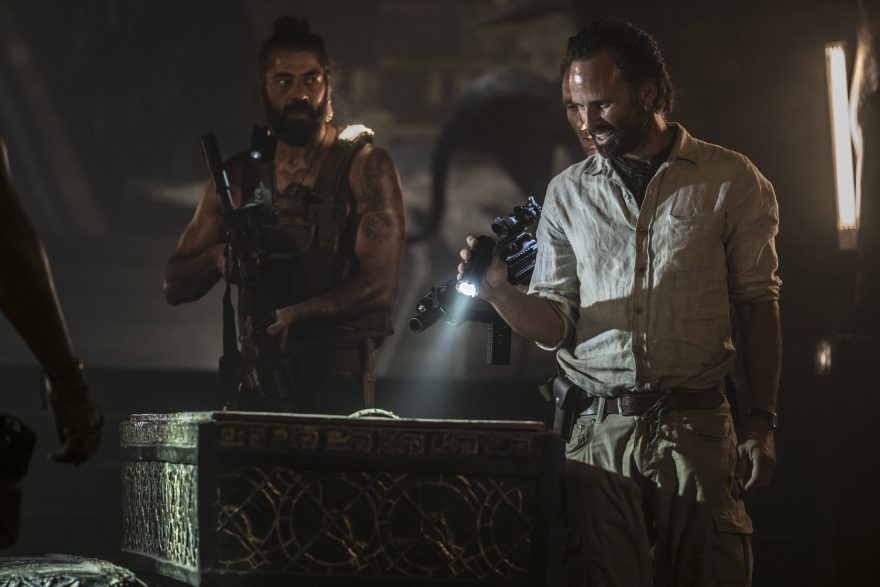 Naturally, like other Tomb Raider adventures, Lara ends up trying to solve riddles, take down bad guys, and unearth the truth about her father.

Tomb Raider is a fair bit darker and more realistic than the previous franchise films, but it’s happy to gleefully play up cliches too. The combination of dark and gritty fights with impossible action sequences work pretty well together, and it keeps the film fun, but Tomb Raider feels sloppy too. Mathias is a depraved villain, but he also seems to make next to no sense, and his motivations are impossible to understand. I like the straight-up scary way that Goggins plays the part, but there’s really no way to understand why he’s working so hard for his evil goals, unless it’s strictly that it’s his job.

Meanwhile, Dominic West has a pretty clear role to play, and father Croft is moderately well-written, for the most part. It’s not a big role, but West brings some emotion and depth to the part.

And then there’s Lara weird knack for surviving through pure chance. She makes it through the first hour of the film almost entirely on luck and the help of strangers, and while I appreciate that the film doesn’t make Lara out to be a perfect survivor, dumb luck also doesn’t do the character any favours.

Tomb Raider improves on Lara though. The most recent games have made Lara a braver, bolder hero, and even with the weak script, I would say Tomb Raider follows those concepts to make this the best film of the franchise so far, with lots of potential ahead. The story falls short, and doesn’t offer much complexity or nuance, but it mixes new ideas with some treasure hunting tropes to modernize the story and our hero.

Vikander doesn’t have a lot of script to work with, from what I saw, but she is a great hero. She feels far more human, real, and prone to error than the near perfect hero we saw when Angelina Jolie played the part. Director Roar Uthaug and writers Geneva Robertson-Dworet and Alastair Siddons have balanced her feats, brilliance, heroism, and reckless tenacity with judgement errors and moments where she needs to be saved. That’s a tough thing to portray in film a lot of times, but it works well in Tomb Raider and finally makes the character seem a lot more human.