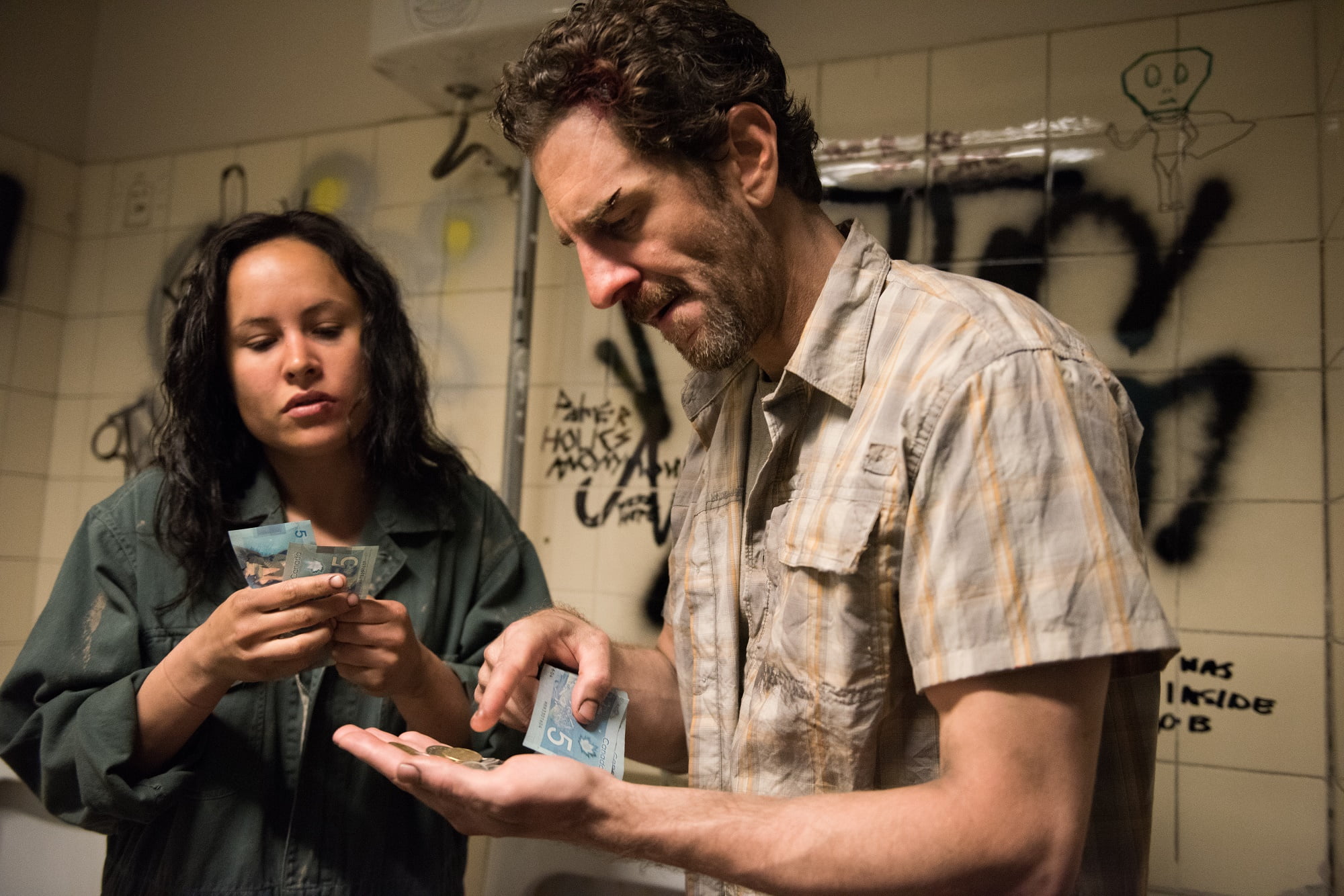 Deliberately grotesque, unapologetically foul-mouthed, and frequently hilarious Canadian comedy The Go-Getters revels in bad taste and worse behavior. A rapid fire series of escalating, misanthropic schemes enacted by a pair of characters that could most charitably be called unlikable, The Go-Getters assuredly won’t be to everyone’s comedic taste. If you’ve ever disliked a film because one or more of the main characters was tough to relate to or they constantly did nasty, terrible, horrible, no good, very bad things, then stay far the fuck away from this latest effort from director Jeremy LaLonde. On the other hand, if you think movies like Bad Santa and Death to Smoochy are hilarious (like I do), The Go-Getters will get you rolling harder than you have in a long time.

Alcoholic burnout and freeloader Owen (Aaron Abrams) has just been kicked out by his brother, Kevin (Kristian Bruun), over his perpetual inability to stop drinking and get his shit together. Kevin takes some pity on his brother, allowing him to move his mattress into the boiler room of his Toronto dive bar. Knowing that he’s on borrowed time, Owen reluctantly teams up with an equally terrible, down on her luck, and antisocial prostitute named Lacie (Tommie-Amber Pirie), who says she has access to a comfortable living situation for the both of them if they can find a way to get to her hometown out near Ottawa. To get there by bus, they need to raise the seemingly manageable sum of $98, which considering their penchant for self-sabotage and overall loathsomeness towards others and each other, is easier said than done.

The Go-Getters opens with someone getting pissed on, and really a film that kicks off with such an abrasive, but amusing note can only go up or down from there. LaLonde and writers Abrams and Brendan Gall quickly prove that they have nowhere to go but down and in a hurry. I mean that as a compliment. Built around a story that questions how low already disgraceful people are willing to go to fulfill their own selfish needs, The Go-Getters only becomes funnier the more off putting it becomes, morphing into a completely ridiculous and gleefully nasty bit of business. The opening salvo of urine (which is matched nicely by the sepia, 70s styled tinting LaLonde frequently employs here) not only says, “abandon all hope, ye who enter here,” but also confronts the audience honestly and genuinely with a hearty “Fuck you, bud. No one’s forcing you to be here.” 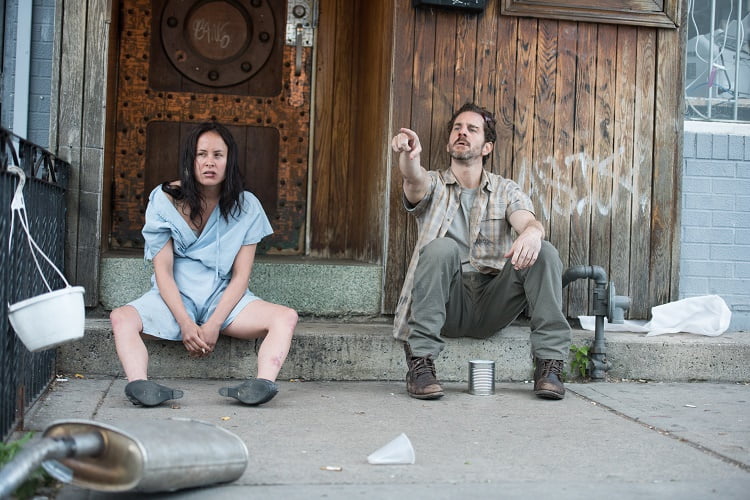 Those hip to what LaLonde and company are laying down will be treated to an uncompromising comedic work unlike anything that’s been attempted in Canadian cinema for quite some time. While LaLonde (How to Plan an Orgy in a Small Town, Sex After Kids) is no stranger to risque material, the sheer amount of manic, wall-to-wall misanthropy on display in The Go-Getters marks a quantum leap in his directorial chops and style, with the filmmaker making great use of split-screens and rapid fire editing that makes this feel like a heist movie for degenerates. Instead of working with more observational material, The Go-Getters is comprised of heightened situations, bizarre characters, and gross-out gags delivered like they’re coming out of a gatling gun. Once Owen and Lacie get going, there’s positively no stopping them.

Abrams and Pirie are a comedic dream team, going after each other and everyone around them with tooth-gnashing gusto that’s as infectious as it is repulsive. Much of The Go-Getters feels like a game of one upsmanship between Abrams and Pirie; like they’re daring each other to go even lower with the material, and from scene to scene it’s almost impossible to predict which one will debase themselves more. It’s akin to watching Jackie Gleason’s Ralph Kramden arguing with himself for eighty minutes, or like both halves of The Odd Couple got blotto on Thunderbird and drain cleaner. It’s a testament to Abrams script and their overall chemistry that none of The Go-Getters feels like an improv exercise. In its own sick way, The Go-Getters is rather tightly constructed and built around the specific rhythms of the characters. It should also be noted that next to Melissa McCarthy in Can You Ever Forgive Me, no actors this year have made strings of curse words and insults sound as purposeful and strangely poetic as Abrams and Pirie. The Go-Getters rises and falls on the timing and execution of the people involved, and everyone involved brings their best to the film.

The whole thing is almost deliberately surreal; a direct attack on the rose coloured notion that Toronto is a world class city filled with world class people. The Go-Getters never cops out and becomes a movie where Owen and Lacie will learn to be better people, but rather one where they learn that there are shittier folks in this city that they hate who are worse than they are. The only likable member of the bunch is Bruun’s put-upon sibling, but he’s too stubborn to realize that he could get rid of Owen and Lacie rather easily if he just caved in to one last demand. A subplot that grows increasingly prevalent involves Lacie trying to get out from under the thumb of her cerebrally damaged, hard living pimp (James Cade), who I guess is the closest thing The Go-Getters has to a villain. There are also some great, scene stealing bit parts for the likes of Amy Jo Johnson, Ennis Esmer, and Jessica Greco as a rent-a-cop, cab driver, and bus station clerk, respectively. Everyone is embracing the material here as much as Abrams and Pirie have.

Just as The Go-Getters starts to flag in energy ever so slightly, LaLonde and company prove that they were saving the best for last, offering up an ending that’s uniquely satisfying. It isn’t a corny about face, and neither the characters nor the viewers watching them will get everything they want, but it feels reasoned and like a karmic best case scenario for all parties involved. Some unsuspecting audience members who might not be aware of what they’re getting into with The Go-Getters might not make it that far, but the hearty souls willing to play in LaLonde’s gutters will have plenty of fun getting as filthy as possible.

The Go-Getters opens at Carlton Cinemas in Toronto, Globe Cinema in Calgary, and Mayfair Theatre in Ottawa on Friday, December 7, 2018.

Check out the trailer for The Go-Getters: