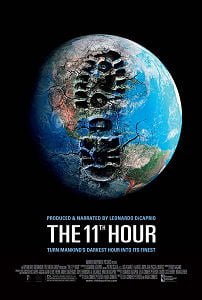 Five new films make their way to theatres this weekend, and that means five choices: drama, comedy, action, documentary, or a teen film? The big caliber films are definitely behind us at this point in the summer, but a couple of this weekend’s new films could make for an interesting trip to the cinema.

My favorite film of the week is the environmental documentary The 11th Hour. Written and produced by Leonardo DiCaprio, who also narrates, the film discusses the fragile state of our planet’s ecosystem through interviews with a number of experts from around the world, including Canada’s own David Suzuki. Although media coverage of these issues is already a big deal, DiCaprio’s film takes a slightly different approach and discusses a number of things affecting the environment, including the impact of consumerism. The only flaw with The 11th Hour is the fact that while it is interesting, the film lacks a visceral connection with the audience and feels a little rambly and disjointed at times. The film is still worth watching if the question of the environment has left you wondering what you can do for the planet.

In the drama Resurrecting the Champ, Josh Hartnett plays Erik Kernan, a sports writer who discovers that a destitute man living on the street is actually one of the greatest boxing legends of all time. What begins as a chance for Erik to prove himself turns into a personal revelation as he reexamines his life based on his time with the “Champ”. Samuel L. Jackson, who plays “Champ”, has been described as almost unrecognizable in this role, however early reviews have been fairly split on the film. The only clear indication so far is that the Village Voice has called it “overwrought”.

For the comedy lovers out there, especially if you’re a fan of physical slapstick, Rowan Atkinson reprises his most well known role for Mr. Bean’s Holiday. This time around Mr. Bean, who is of course a bumbling catastrophe, embarks on a trip to the French Riviera where he gets entangled in no end of trouble. Based on the hit British TV show, this might not be the kind of comedy for everyone, even if Mr. Bean could be considered a classic character now. However it is worth mentioning that this might be the last time Atkinson takes on the role for a feature film.

The best-selling novel The Nanny Diaries also makes its way to the big screen this week with Scarlett Johansson playing the role of Annie Braddock, a college student working as a nanny for a rich New York family. Geared toward tweens and younger teens the story is a fish out of water tale that was a huge hit as a book, but doesn’t look ready to make more than a tiny splash on the big screen. Early reviews have so far been negative, and Johansson looks disappointing in all the early clips.

Finally, there’s War. Starring Jet Li as the assassin “Rogue” and Jason Statham as FBI agent Jack Crawford, the film pits the two action stars against each other after Rogue kills Crawford’s partner. You can probably be forgiven for thinking the film sounds derivative since all signs point to this being a movie that shouldn’t entice you out into theatres.