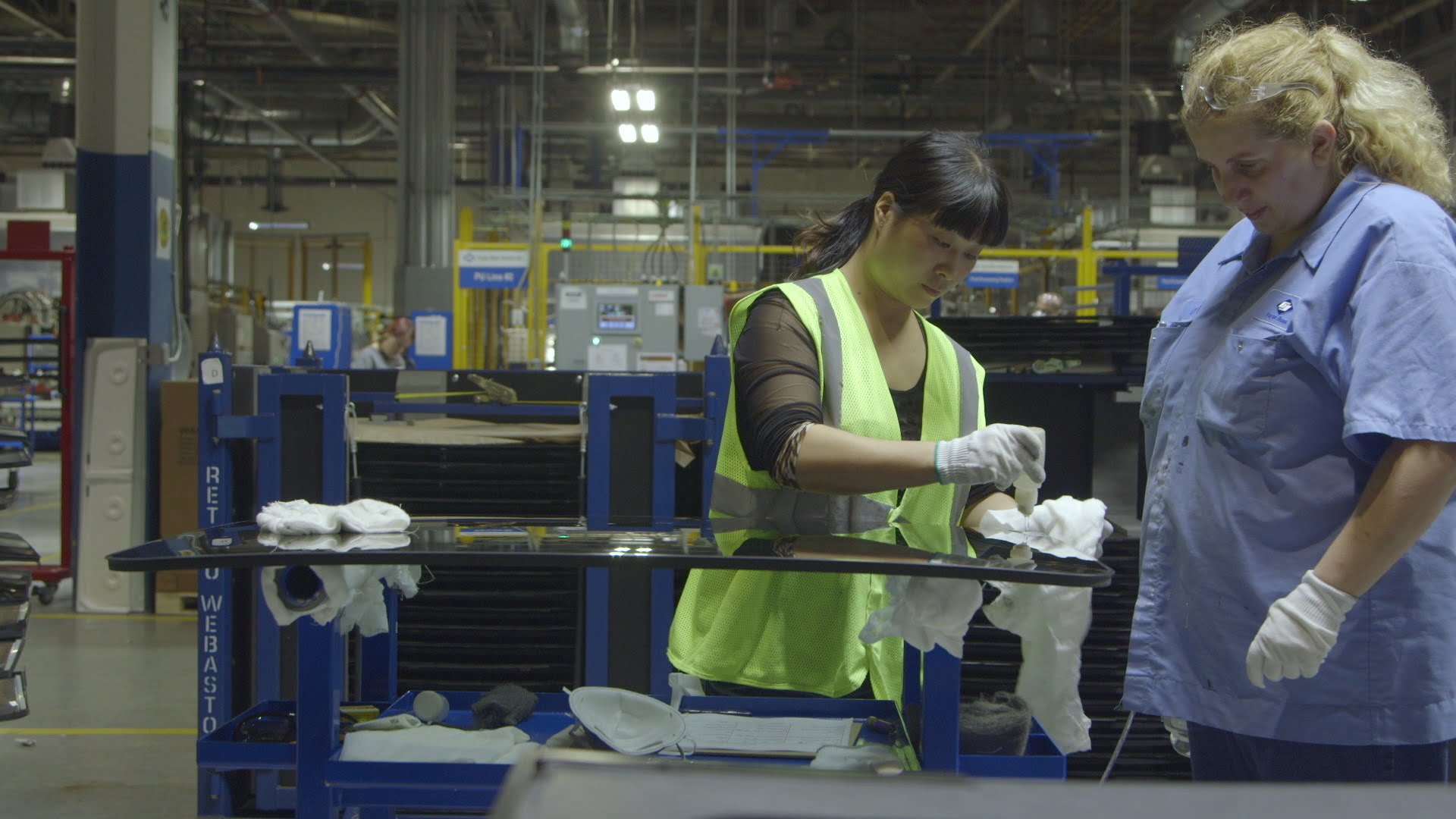 An eye opening and humane examination of the ways the modern global economy and shifting workplace attitudes have impacted the middle and lower classes, Julia Reichert and Steven Bognar’s documentary American Factory should be required viewing for anyone who ever questions why unions or labour movements are necessary and vital. Stories like the ones profiled by Reichert and Bognar in American Factory play out every day in various labour and business sectors around the world, but rarely are these examples afforded such richly detailed views. It might be the best documentary about the rights, dreams, and struggles of blue collar workers in North America since Barbara Kopple’s seminal Harlan County, USA, but while American Factory doesn’t reach a similarly violent crescendo, the impact is still resoundingly forceful and unforgettable.

In an earlier documentary – 2009’s Oscar nominated short film The Last Truck – Reichert and Bognar captured the final days of production at a soon-to-be-closed General Motors plant just outside of Dayton, Ohio that shuttered just before Christmas in 2008. American Factory returns to Dayton and the site of that previous film. In 2015, after years of laying dormant and practically abandoned, Chinese auto glass manufacturer Fuyao sought to reopen the Dayton plant. In addition to creating thousands of new jobs in a place that had been particularly hard hit since GM left, Fuyao’s project would come with a $500 million investment. Fuyao, who controls approximately 70% of the global auto glass market, hired many locals who were familiar with the plant and brought in some of their best Chinese workers to help train their new American counterparts.

It initially sounds like brighter days were ahead for a community in need of some good news, and while plenty of unemployed labourers were happy to get back to work, there was a somewhat darker side to the agreement made by Fuyao. The Dayton plant wouldn’t be a union shop, and workers would be making roughly half of what they were making when GM owned the space. Workers would also be asked to adapt to a more traditionally Chinese view of what a labour force should adhere to; one where praise from management for a job well done and safe working conditions come a distant fourth and fifth place behind maintaining output, speed of service, and quality (pretty much in that order). At first, there’s a “feeling out” period where Fuyao’s transplanted Chinese workers get to know their American trainees. Many of them get along, some of them don’t, but no matter their relationship, it’s clear that not everyone working at the Fuyao plant finds their working conditions fair and equitable, and the billionaire run foreign corporation threatens to pull out whenever talk turns to unionizing.

Filmed over the course of several years, American Factory shows the uneasy trajectory of Fuyao’s influence. Many of the American workers profiled by Bognar and Reichert have lost houses, been forced to move into apartments that are too tiny for their families, and are thrilled at first to have any sort of decent paying job, even if it does mean a pay cut from what they made from GM. Some try to give Fuyao the benefit of the doubt, and the company also tries their best to remain patient with the American workers who can’t match the output of their Chinese factories. On the other side of the equation are the Chinese workers asked by Fuyao to come over and train the Americans. The Chinese employees have been asked to spend two years in a foreign country away from their families for no additional pay or further considerations. The Chinese workers can jovially interact with their American counterparts, but they can’t understand why the complaints about the pace of the work at hand or reticence to work in close proximity to four-hundred degree blast furnaces without protective gear. Similarly, during a trip to China that’s captured by Reichert and Bognar, the top American workers from the factory are perplexed by the almost militaristic, cult-like ways workers are told to respond and show respect to the company, and aghast by the lack of safety regulations, which extends to watching workers sorting through mountains of broken glass with no protective gear whatsoever in the film’s most striking visual moment. (For what it’s worth, Fuyao workers do have a union in China, but it’s so closely tied to the Communist Party that it seems to exist in name only.) 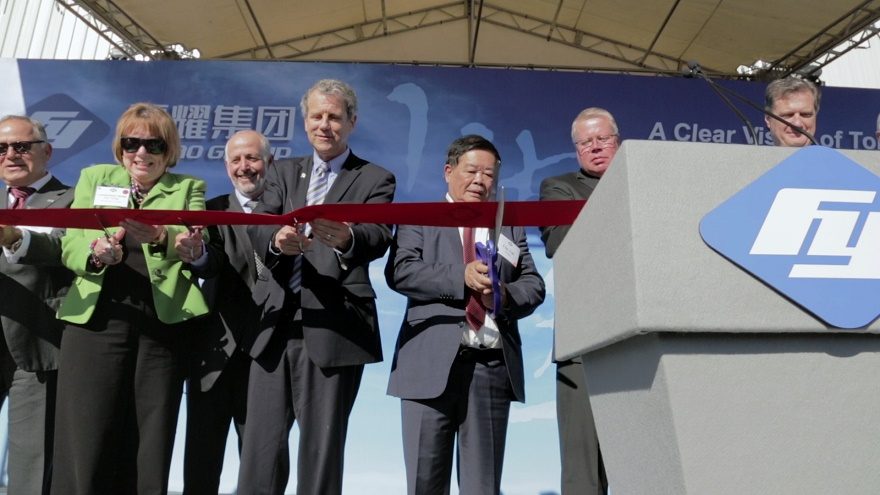 American Factory is particularly adept at subtly highlighting the longstanding hypocrisies that are often at the heart of corporate transparency. For all the tactics that could be seen as being underhanded, callous, and backwards, Fuyao executives – even at their most oblivious and selfish – are nothing if not honest the entire time about how they’re exploiting their new workforce. They’ve become the corporation they are today because they’re able to follow through on most of their promises to the marketplace, and the wellbeing of their workers comes second to saving face. That desire to always look productive in the eyes of the business community might sound like a uniquely Asian sort of sentiment, but American Factory could just as easily look at similar workplaces around the world. While the culture shock experienced between the American and Chinese workers is unique to this particular situation, the further cutting of corners in manufacturing and anti-union sentiment has been happening around the world for quite some time. There’s a distinct sense throughout American Factory that Fuyao sees human labour as a necessary evil; a stop-gap measure until robots and machines can effectively take over the majority of manufacturing duties, and that mentality isn’t exclusive to this story. Human labour is undervalued because workers are seen by those holding the purse strings as simple machines.

American Factory looks at the uneasy relationship that corporations have with their employees from a variety of perspectives. Reichert and Bognar spend time with indoctrinated corporate boosters, happy American employees, skeptical new hires, people desperate for money, and members of middle-to-upper management almost equally. What emerges is a complete, if admittedly damning picture of corporate culture that goes beyond clashing cultural mentalities and mounting workplace tensions. In a post-industrial North American economic climate where corporations are constantly finding new and legal-but-unethical ways of undercutting their competition, American Factory stands as one of the more important and indispensable recent documentaries of note.

It’s an impeccably assembled and patient observation of the further devaluing of skilled labour, and while American Factory doesn’t build to the happiest of endings, it’s a perfect outlining of how corporate mentalities work. It’s a working class movie for working class people that doesn’t talk down to the experiences and conflicted feelings many of them face on a daily basis, and their struggles to be heard and understood by the folks who provide them with paychecks that are barely enough to make ends meet. It’s being marketed – as most non-fiction films are – to a more highbrow crowd, but American Factory (which picked up Barack and Michelle Obama as producers after the film won an award for directing at Sundance earlier this year) is the kind of social issues documentary that should be seen by the widest number of viewers possible.

American Factory opens at TIFF Bell Lightbox in Toronto on Wednesday, August 21, 2019. It will be available to stream worldwide on Netflix the same day.

Check out the trailer for American Factory: