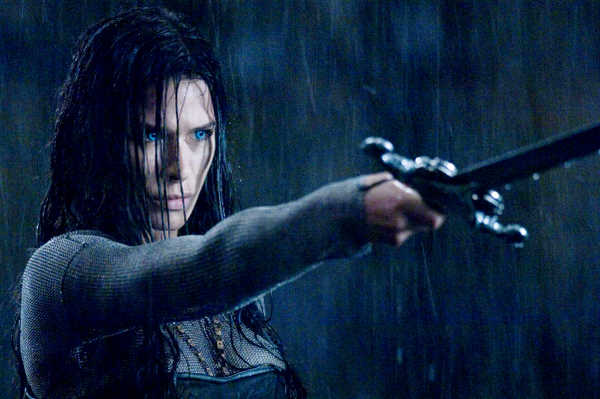 Rhona Mitra in Underworld: Rise of the Lycans

Set before the first Underworld, Rise of the Lycans liberally rips off Romeo and Juliet, but with werewolves and vampires taking on the parts of the Montagues and Capulets. With just a bit more bloodshed and decapitations thrown in.

First time director Patrick Tatopoulos, who previously did a lot of work with creature design and makeup, takes to the big chair to guide Rhona Mitra as the vampire Sonja. She has fallen in love with Lucian, played by Michael Sheen, a werewolf who has no problem fighting the arrogant vampires after he served them for so many years. His chief rival is of course the leader of the vampires, the arrogant Viktor, played once more by Bill Nighy, who will stop at nothing to break Sonja of her love of the beast.

Retreading some of the ground we’ve already covered in the last two films, Rise of the Lycans has a fresh perspective, but lacks much of the gloss applied by Wiseman’s crew. Werewolves leap cartoonishly in and out of frame, transforming into plaster cast terrors with a jerky style that reminds me of 70s horror films.

I also can’t fathom for the life of me why all the vampires are essentially slightly strong humans with sharp teeth. Sure, I get that this movie is all about the Lycans, but why does that mean all the vampires have to be complete wimps?

All things considered, Rise of the Lycans is a B-movie, painted up to look like a Hollywood blockbuster, but lacking any of the necessary style. The acting in the film is decent, although not spellbinding. Sheen and Mitra are both acceptable, but the rest of the cast is fairly forgettable. Sadly, I think Nighy is a perfect Viktor, and does as much as he can with the role, but it feels a bit like he’s scraping the bottom of the barrel.

As a money-grab, this was a no-brainer for the studio, I’m sure, but it’s about time we staked this franchise, threw some holy garlic at it, and buried it in a silver casket, just to be safe.

For the record, the DVD comes with a few making-of featurettes, a music video, commentary track, and also arrives on Blu-ray. If you really want to enjoy a fun vampires vs. werewolves adventure though, go pick up the original Underworld, which is also available on Blu-ray.

Taken
One of the film world’s greatest actors slums it this week with an action-thriller about an ex-CIA agent hunting for his kidnapped daughter.

Written and produced by one of my favorite filmmakers, Luc Besson, Taken is the recognizable result of ripping off the Hollywood thriller, but with a slightly international approach.

Liam Neeson plays Bryan, a divorcee trying to reconnect with his daughter in the face of a new step-father who can give Kim, played by Maggie Grace, everything Bryan can’t. With the opportunity for Kim to vacation with a friend in Paris, Bryan has his doubts that a teenager should be traveling on her own, but of course, she is allowed to go anyway… and is immediately “taken” by a group of Albanian slave traders.

Bryan leaps into action, calling on the help of his CIA friends and contacts to rip through Paris on a hunt for his daughter, while getting some vengeance along the way.

Taken is, of course, an over-the-top action story where Bryan reeks havoc at every turn, sniffs out even the most elusive of random clues, and still gets the job done without being arrested. It’s far fetched, and more than a little emotionally loaded, but Neeson is a rock as the film’s lead, and turns even the most stilted dialogue into cold, hard, nearly believable wisdom.

Although I had issues with the opening scenes, and Besson’s story, which bears a lot of resemblance to some of his other work, Taken is a good, old-fashioned movie about retribution and vengeance. It’s bloody, a bit gritty, and certainly dark, but all in the right measure.

Star Trek: Original Motion Picture Collection
Just in time for the Star Trek mania surrounding J.J. Abrams’ reboot of the franchise, Paramount is releasing the original six films in a special Blu-ray collection. Included are the films, starting with Star Trek: The Motion Picture and working up to Star Trek VI: The Undiscovered Country, plus over two hours of new features, and twelve hours of previously released extras.

While I haven’t gotten my hands on the collection yet, it seems like a definite must-have for anyone with a big screen TV and a love of all things Star Trek.

Seth MacFarlane’s Cavalcade of Cartoon Comedy
From the guy who brought us Family Guy and American Dad! comes this collection of hilariously inappropriate cartoon shorts, poking fun at pop-culture icons with reckless abandon. In the same style as the cut-away gags from Family Guy, the collection is definitely not for the feint of heart, and is completely uncensored. While a few gags are hit and miss, the collection is definitely funny, and shows us just what kind of a sick and twisted genius MacFarlane is when he’s not being censored for TV.