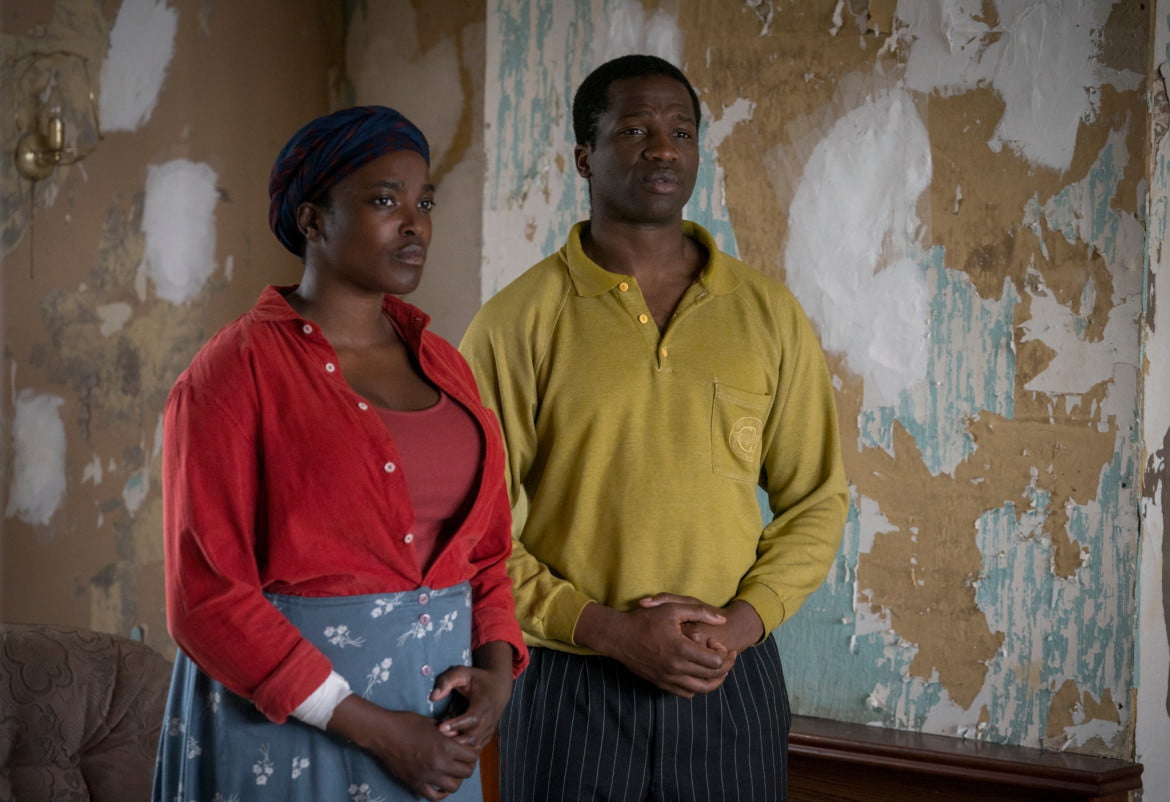 His House, the debut feature from British filmmaker Remi Weekes, is the most intelligent, unique, and emotionally captivating horror movie of the year. A pointed and poignant look at real fears faced by migrants fleeing violence and persecution, Weekes’ film is one of the most ingenious and socially conscious upendings of the haunted house thriller ever constructed. His House certainly delivers its fair share of scares, but the emotions and repressed traumas that give those moments their power are far more impactful and memorable. Unlike many horror movies built around ghosts, spirits, and witches, His House feels frighteningly like a story that could be unfolding in places all over the world in some form or another at this very moment. His House is a film that uses a viewer’s empathy and social understanding to scare the absolute hell out of them.

Bol (Sope Dìrísù) and Rial (Wunmi Mosaku) are refugees fleeing tribal violence in South Sudan following a tragic loss. Having barely survived a perilous trip across the Atlantic, the couple is looking to settle down in England. Unlike many other migrants who try to settle down in Europe, Bol and Rial are granted entry into the country as refugees, with a list of conditions they have to meet for their claims to be approved. They can’t apply for work or move from their government chosen home. They’re granted a stipend that’s far below living wages, and are basically dumped into a society of which they have a limited understanding. The bright spot is that the home they’ve been given is large by most refugee standards, and they don’t have to share it with other families. Although their two level flat is in a dodgy neighbourhood, Bol and Rial are grateful to have a place of their own. That newfound and tenuous peace is shattered, however, when Bol starts hearing noises coming from inside the walls of their new living room.

His House (which first premiered earlier this year at Sundance) escalates nicely from that point onward, with the noises giving way to nightmarish visions and triggering flashbacks to the couple’s time in Africa. The groundwork to make viewers buy into and genuinely care about why this haunting is happening is laid early on, thanks to the tight script from Felicity Evans and Toby Venables. His House is so focused on doing justice to the terrors at the heart of the refugee experience that almost all of the traditional horror movie tropes are secondary. The situation for Bol and Rial – despite fleeing successfully from violence – is already harrowing and stressful before the spirits in their new home demand that a debt be paid for their past actions. At every turn, the genial couple is greeted with skepticism at best (from their caseworker, played by Matt Smith) and outright scorn at worst (exemplified by some of the local teens and the board that first hears their case). It’s easy to see that Bol and Rial are decent people who are determined to never go back home, but they’re constantly being told that they need to assimilate quickly to British society; to be “one of the good ones.” They’re left to their own devices, with no guidance or support other than some finger wagging and being told that they can’t screw up this “wonderful” opportunity. Even outside their home, the couple’s lives are dominated by fear.

The psychological toll of the refugee experience is front and centre throughout His House. What does a new home mean to someone who hasn’t felt rooted to a single location in a long time? What is a “haunted house” to a haunted mind? How does one learn the ins and outs of a new culture without guidance or assistance? Most importantly, what happens to all the unspeakable traumas many refugees have faced? That trauma never goes away, and if left untreated, it can be all consuming. The spirits in His House weren’t in Bol and Rial’s new home before they got there. They’re mental and supernatural manifestations of fears and traumas that followed along their journey. They are demons of Bol and Rial’s own creation, which is far scarier and harder to shake than any external poltergeists. These visions will cause Bol and Rial to mentally unravel, and it’s doubtful that requesting to move apartments will solve the problem. At one point while his mania is growing, Rial astutely notes that the government would want nothing more than to “see them crazy.” His House isn’t just a ghost story, but more poignantly a film about people who need serious help, yet are given very little.

His House also has a lot to say about gender roles and how they play into cultural assimilation, with Dìrísù and Mosaku delivering detailed performances that perfectly play into the detailed script and direction. Rial is clinging to some hope that she’ll be able to retain part of her cultural heritage, despite the obvious pain associated with it. She takes their haunting seriously, but stops short of following through on what the spirits are asking of her. Meanwhile, Bol very subtly, but noticeably starts buying tools, fixating on “home renovations,” and buys clothes he doesn’t need. Bol is terrified of what he’s seeing, and is arguably far more shaken than Rial. Dìrísù plays Bol brilliantly like a man who wants to deny his innermost traumas and fears (and past actions, as it will turn out) in favour of presenting himself as a strong male. Mosaku is Dìrísù’s perfect counterpart, playing her character as composed and strong as possible. Rial is frightened, but she’s not posturing or compartmentalizing those fears. It’s a brilliant, fully realized dynamic that further underlines the film’s taut, tight construction.

Weekes’ direction is remarkable for a first time feature filmmaker. His instincts for pacing, design, foreshadowing, performance, and fine detail are so remarkable that one could be forgiven for thinking His House was made by a genre veteran with decades of experience. While there are some well handled jump scares and grotesque images, Weekes (who has an extensive editorial background) generally favours the creation of slowly mounting dread over a series of flashy pay-offs. Weekes implicitly understands that the fears of his characters are two-fold. There’s the fears from without (worrying about potentially being sent back to South Sudan, where they’ll surely be killed) and those from within (the spirits that have followed, which also threaten to kill at least one of them). Weekes knows his way around set pieces, showing a brilliant understanding of colour schemes, blocking, and clever camera angles, but even the more low key moments have a pronounced degree of intensity. One of the best scenes is His House is a seemingly throwaway bit where Bol goes to buy a shirt in a department store. Clever eyed viewers will notice that something has followed Bol into the store, but it’s not what one expects from a film about ghosts, and while it doesn’t have much of a payoff, it’s a scene designed by Weekes to make people think more deeply about the reality behind such an otherworldly plot.

His House is the sort of well made thriller that benefits from repeat viewings, not because the plot is complicated, avant garde, or packed to bursting with twists. It could easily become a horror movie classic based on its effective scares and atmosphere alone, but savvy viewers will find themselves more drawn to the film’s layered, measured, and thoughtful approach to storytelling. All great haunted house movies acknowledge the psychology behind the core situation, but His House is the first film to utilize its characters sense of otherness and rootlessness to fuel its story. That unique perspective is one that will be hard for others to imitate in the future with any degree of conviction, making His House an effort that’s as timeless as it is stressful to behold. In a genre packed with imitators, His House is truly an original.

His House is available to stream on Netflix starting Friday, October 30, 2020. 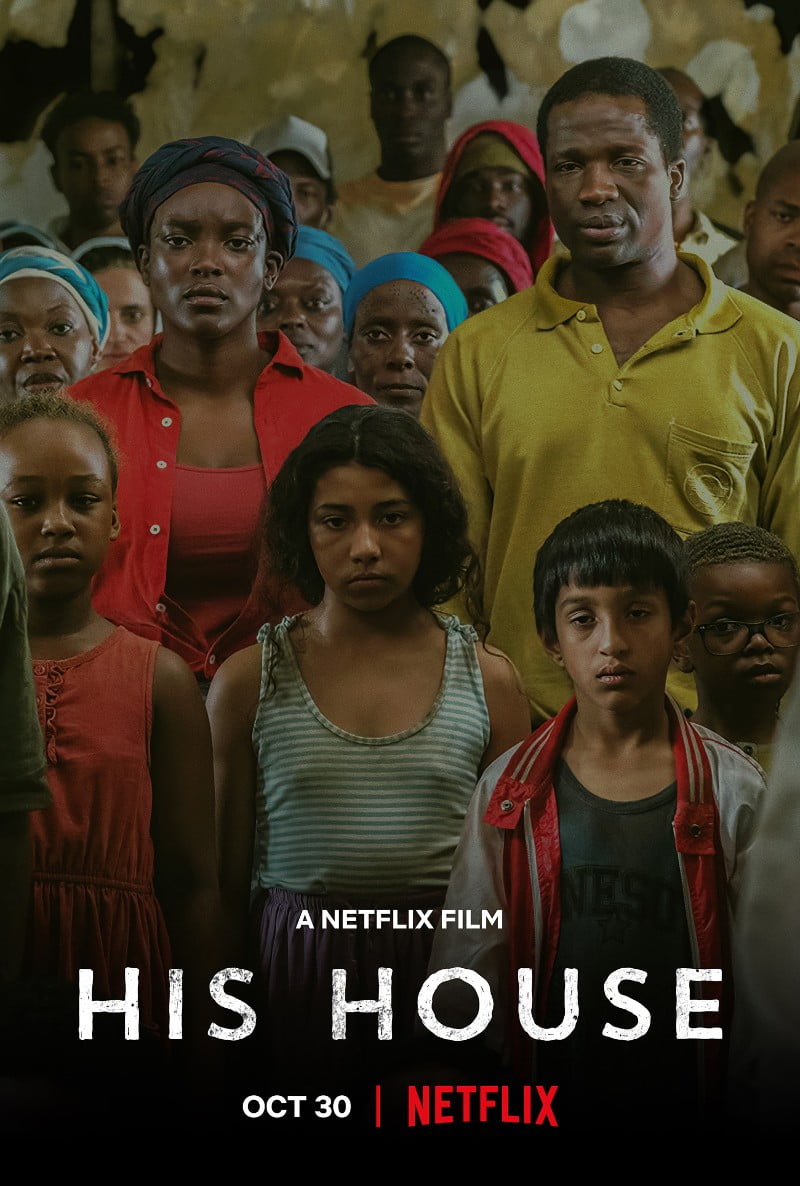