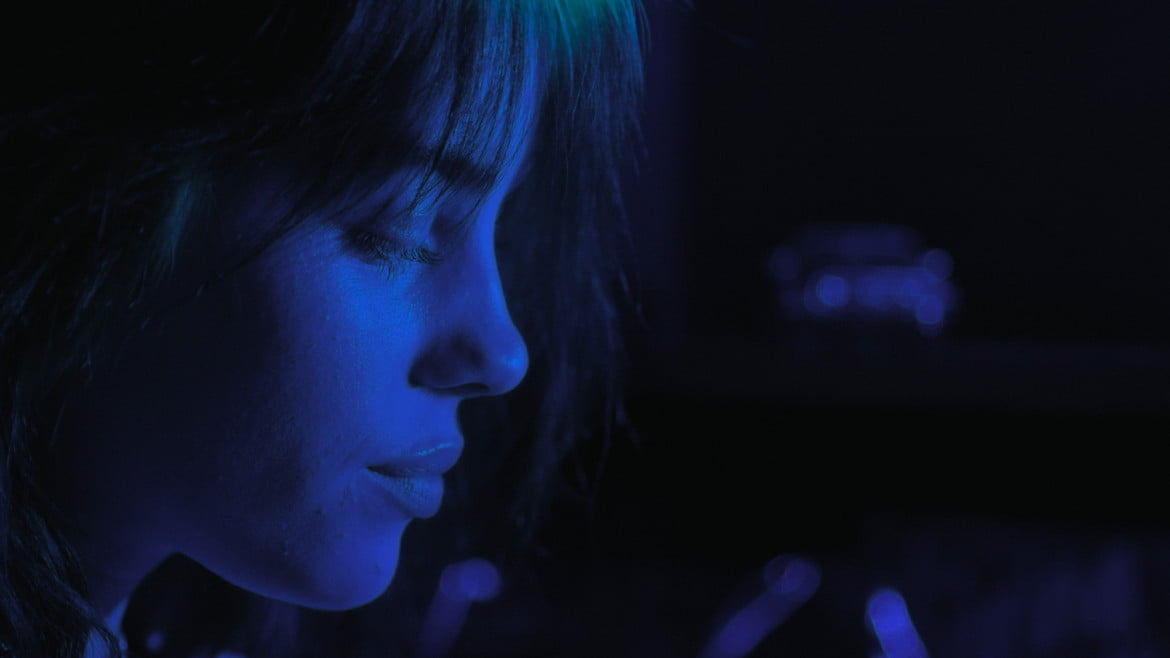 Mostly one for the fans, but still offering an engaging (if almost punishingly long) profile of a pop star, Billie Eilish: The World’s a Little Blurry charts the meteoric rise and overwhelming success of its teenage subject. At nearly two-and-a-half hours in length, Billie Eilish: The World’s a Little Blurry will be a large ask of most outside of the singer-songwriter’s massive fan base, but once director R.J. Cutler gets around to capturing its subjects more humane day-to-day joys and struggles, his documentary becomes a lot more engaging to casual viewers. It will take them over an hour to get to that point, but once Cutler’s film starts bearing some thoughtful, if rather obvious fruit, the whole thing is elevated slightly beyond the level of a standard record label and management team produced puff piece.

Billie Eilish O’Connell came out of nowhere several years ago to take the music world by storm when she was just thirteen. Raised in Los Angeles by parents who instilled a love of music in her at an early age and aided by her brother/collaborator/producer Finneas, Billie’s first hit – “Ocean Eyes” – sparked a massive online following and tremendous commercial success. Her songs (including the omnipresent “Bad Guy” and the title track to the upcoming James Bond film) and unique public image have made Billie Eilish one of the most captivating pop and rock stars of the century thus far. What started – and to no small degree, still continues – to be a homegrown DIY operation run out of their parents’ house has turned into an unlikely musical empire for Billie and Finneas.

Despite all of the grown up success and responsibilities, Billie is still just a young adult, something Cutler spends a lot of time hammering home throughout this epic length documentary. She’s driven primarily by the emotion at the heart of her art. She has a joyfulness that can be infectious when she’s excited about something. She’s always taken aback whenever a celebrity says they’re a fan (extending most prominently to some truly endearing interactions with Billie’s childhood celebrity crush, Justin Bieber). She can be outspoken, brash, petulant, bratty, edgy, and sometimes a bit too chill for her own good. In short, she’s a teenager. She just happens to be a really famous one. 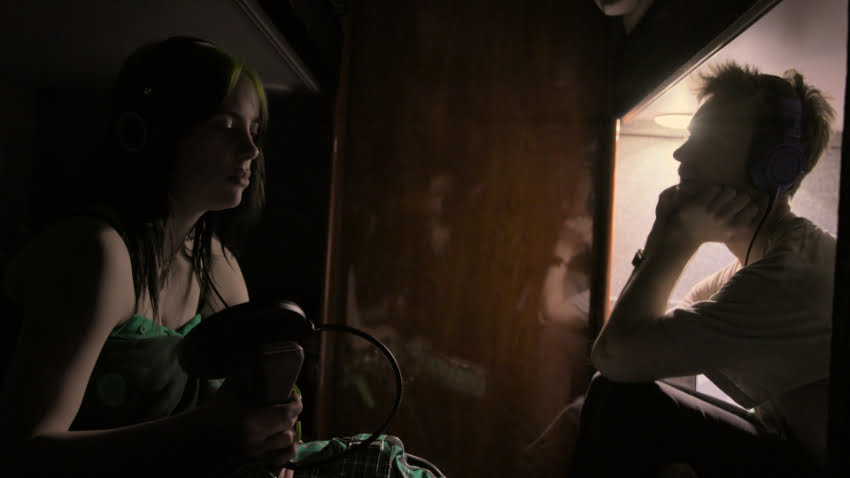 In the early stages of Billie Eilish: The World’s a Little Blurry, Cutler doesn’t have to do much heavy lifting. In a parallel to Cutler’s other recent documentary Belushi, the filmmaker doesn’t have much more to do when documenting the early stages of his subject’s career than assembling a bunch of footage (much of it shot by the family) that already exists. While it’s admirable that Cutler wants to show a full trajectory of Eilish’s career from ages thirteen to eighteen, the first hour of the film offers frustratingly little of genuine note. Other than doing a decent job of showing Eilish as an ordinary teen pre-stardom, there’s little insight into the image and art that made her into the sought after talent that sells out arenas today. There’s no deep dive into how the songs are written, but plenty of footage of Billie and Finneas going back and forth about production and industry minutiae in their bedroom studio. There’s nothing at all about Billie’s unique sense of style, which is a major part of her image and on stage identity. She has a desire to exert more control over her career, but she’s still seen as a kid with the lofty responsibilities placed on young artists. That’s truthful, but hardly anything new.

Billie Eilish: The World’s a Little Blurry remains a standard, but honest look at stardom from the inside of a whirlwind throughout, but it never fully turns into a compelling film until the singer hits the road for her first major tour. That’s when Billie Eilish: The World’s a Little Blurry finally decides to get a bit more personal and emotionally weighty. This section is filled with a few too many full-length musical numbers (because Eilish’s record label needs to get all those hits in here somehow) where rapturous fans reach their arms and cell phones to the skies, but between those pauses is a candid portrait of someone coping with life and success the best way they can.  Billie speaks openly about her struggles with mental health, carving out time for self-care, and her diagnosis with Tourette Syndrome. Her high energy stage shows create the sort of mounting neck and leg problems normally found in people three times her age. Like many teens, she has some boy troubles that seem like an emotional roller coaster for her. Her worries about performing at Coachella are wholly valid and understandable, especially when things don’t turn out the way she hoped. Mom and dad remain supportive, but they wonder how much longer they’ll be able to live their seemingly normal life.

Again, a lot of this can be seen in other documentaries and television series that follow around pop stars of the day, but Billie Eilish: The World’s a Little Blurry turns into something genuinely good during a moment of true, honest, and empathetic vulnerability. The day after a New York City post-performance meet-and-greet goes overlong and off the rails, Eilish frustratedly and solemnly comes to the realization that celebrities aren’t allowed to have an off day where they don’t feel like going out of their way to appease a bunch of “randos” sent over by the record label for a photo op. Prior to this point, Cutler has included many moments where Eilish’s crude, joking, and very teenage demeanour could be construed as being rude. I would say that’s just being a teenager, but I understand where that perception comes from. In the moment where Eilish lashes out at everyone in her car about what happened the previous night, she notes that she’s not allowed to appear rude in public. It’s a struggle for the artist because it stifles the need for emotional honesty and self expression that has always propelled her music. She takes these matters personally and with an appropriate degree of seriousness.

At this one major pivot point, Cutler’s film comes into full and vibrat focus enroute to the film’s conclusion with Billie and Finneas’ unprecedented Grammy success. Billie Eilish: The World’s a Little Blurry might be coming too early into its subject’s career to provide an adequate timeline of their success (not to mention one that doesn’t hint in the slightest as to what the future holds), but it is a full bodied look at what it means to suffer for one’s art, especially as a teenager in the public spotlight. I’m sure there are cynics that will view Billie Eilish: The World’s a Little Blurry through unfair and unequal past-precedents. “There’s no way this family can be that well adjusted,” they’ll exclaim with furrowed brows. “She’s really unlikable,” some will scoff without giving regard to the pressures of fame or Billie’s age. While Cutler can’t deflect those criticisms to any degree, he can offer the singer a distinct amount of understanding and respect. It’s a documentary made with the best form of care: the kind that makes one want to believe that things are going to be alright for Billie Eilish in spite of the obvious struggles.

Billie Eilish: The World’s a Little Blurry is available to stream on Apple TV+ starting Friday, February 26, 2021. It also opens in select theatres – where available – the same day. If seeing a film in cinemas, please take all necessary precautions. Wear a mask, practice social distancing, and stay home if feeling ill. 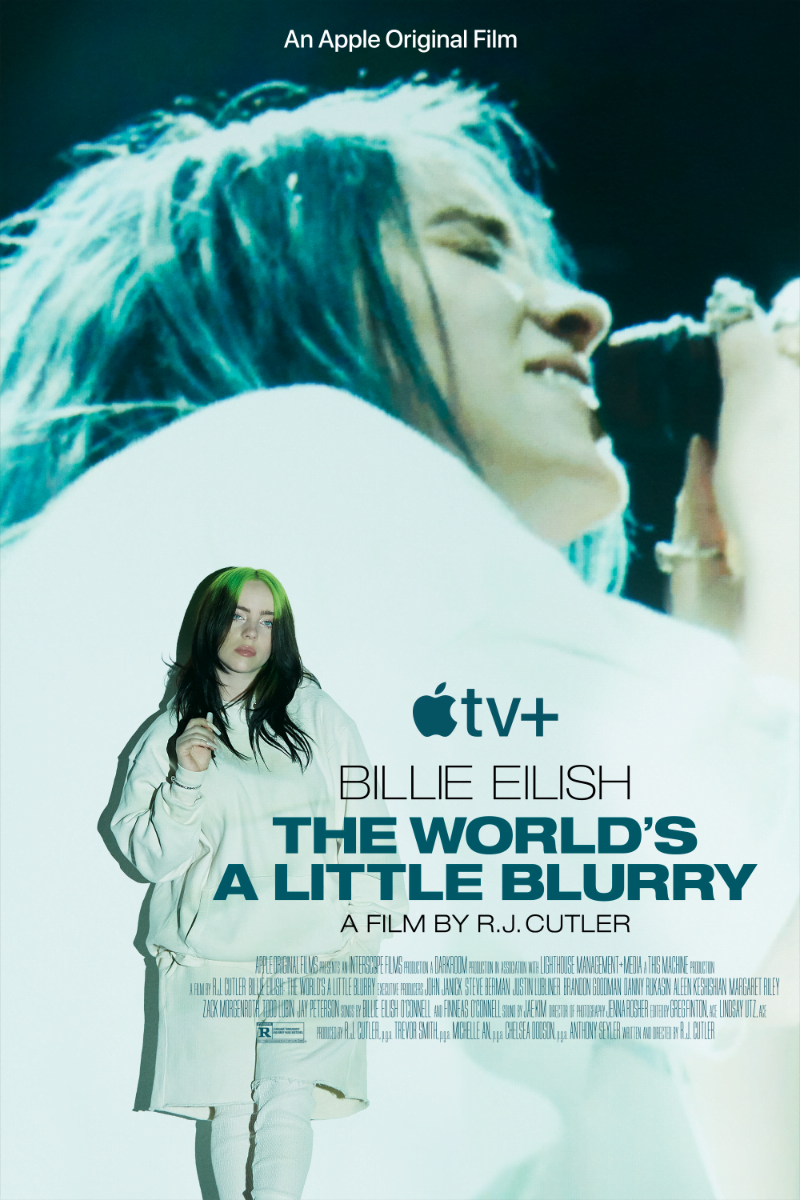