Elegance Bratton’s The Inspection is a superbly acted and emotionally rich look at one young man’s life as a gay person in the military. That shouldn’t be all that surprising when one considers that Bratton himself served in the U.S. military and struggled with a lot of the same issues of identity, mistreatment, and psychological torment that went hand in hand with a gruelling basic training process. Despite sometimes skewing towards mainstream, overly polished melodrama at certain points, the nuts and bolts details and rich characters at the heart of The Inspection are obviously the work of someone who lived and breathed a lot of what’s being depicted on screen.

Set in 2005 – at the height of the American military’s infamous “don’t ask, don’t tell” policy for soldiers – The Inspection follows the experiences of Ellis French, played by rising star Jeremy Pope. French, a twenty-five year old gay man, has been living on the streets and in homeless shelters in and around his hometown of Trenton, New Jersey. With few viable prospects and a cruel, religiously fanatical prison guard mother (Gabrielle Union) that long since turned her back on him, French looks towards becoming a Marine as a source of salvation and purpose. On one hand, French clearly wants to get back into his mother’s good graces. He also desperately needs some sort of stability. But there’s also a large part of French who genuinely believes that he’s destined to die at a young age no matter what he does with his life.

Bratton’s set up for The Inspection gets things off to the strongest start possible, establishing French as a complex, yet understandably guarded and anxious person worthy of love and acceptance. Before he even makes it to basic training – which almost any viewer can guess in advance will be more than a run of the mill crucible for the character – French’s psychological scars and pains are so heartbreakingly rendered that it puts the viewer firmly into the shoes of someone whose troubles can’t get too much worse than they already are. The cruelty towards the obviously queer French will only intensify, but a lot of what’s to come for the young man will be performative, homophobic posturing that almost pales in comparison that what he’s already been through. When you’ve already gone through abject hell for most of your life, what’s a little more tacked onto it?

It’s in these early scenes – depicted with a grim, cold sense of style by Bratton – that the two best performances of The Inspection take root and flourish. As French, Pope delivers a towering piece of work, playing the character and filmmaker surrogate as a wounded person with a bottomless wealth of reserve. French has made up his mind and is going through with his plans to become a Marine even if it kills him, and Pope balances this young man’s singleminded journey and obvious vulnerability with tremendous poise. Pope also has an exceptional, award worthy counterpart in Union, who works further against type than she ever has before as a truly menacing, contemptible, and ultimately selfish maternal figure. Even with limited screen time and placed into a movie full of people who wear cruelty on their sleeve as an adjunct part of their profession, Union’s calculated and uncaring mother still hangs over everything whenever the character isn’t on screen. 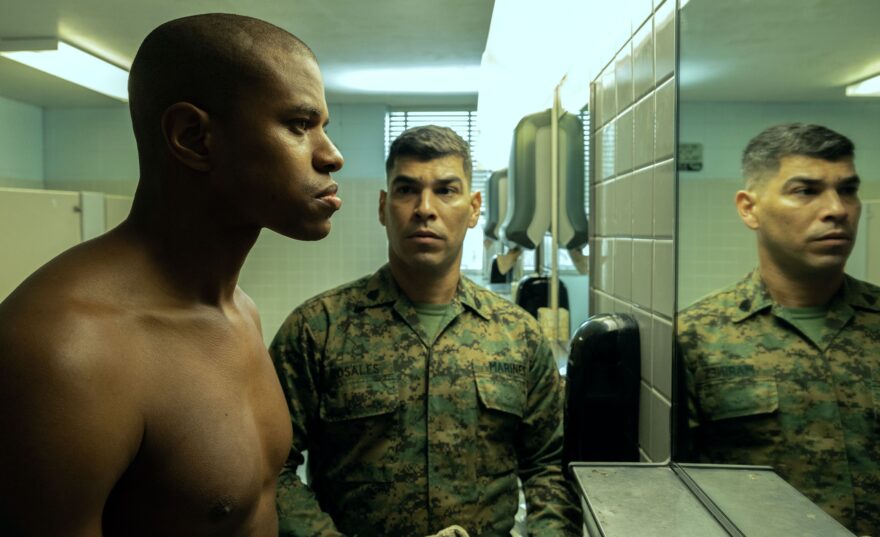 Once The Inspection gets to the bulk of its narrative, Bratton’s film becomes a bit more standardized outside of the queer aspects of the story. French is quickly recognized for what he is by his peers, and most of them – particularly his combative, merciless drill instructor, played nicely by Bokeem Woodbine – would rather see him out of the unit. French never has to say that he’s gay. Everyone catches on pretty early without a word having to be uttered, with the punishment, hazing, and cruelty of basic training ratcheted up for French.

Outside of a hush-hush relationship that French carries on in secret with a kindly, closeted superior officer (Raúl Castillo) and an underdeveloped sub-thread where a Muslim recruit receives similarly harsh treatment, the time spent in basic training alongside French is both harrowing and somewhat predictable. The Inspection is never a bad or credibility straining film, but outside of the queer aspects, most of this territory has been explored in films about the military before, something the movie basically cops to during a sequence where the recruits are shown another famous film about Marine life “as a treat” of sorts. There’s a distinct sense that French reached his true breaking point long before he showed up at basic training, which means the ensuing sequences where the young recruit will be pushed past his physical and emotional limits have a sometimes perfunctory feeling. It’s all very well done, but the viewer knows French enough to understand that there wouldn’t be a film at all if he didn’t make it through at least a good portion of what he’s put through here.

Even if the overall terrain is familiar territory for a military movie, Bratton still directs with passion and authenticity. The personal connection to the material Bratton has would be obvious even without knowing a single thing about the filmmaker, as is the movie’s overall commitment to militaristic authenticity. The Inspection is a film that sometimes employs cliches because those are often the truest and most accessible reflections of a subset of human life outsiders would  struggle to understand. There’s little doubt that the whole truth of what Bratton experienced might be impossible for viewers to take, but what has been picked and chosen here shouldn’t be slighted simply because it has been done in other movies before.

The Inspection does end a bit awkwardly, with a key scene landing strangely because it inorganically sounds like several different, escalating conversations that would occur over a longer period of time getting condensed down to a single dramatically forceful moment; like everything has been suddenly sped up because most of the film’s momentum had been expended in the sequences leading towards the climax. But the work put in by the cast and the strong direction of Bratton help to overcome any of the narrative’s shortcomings. It’s a film about an extended battalion of broken souls that works because every individual is unique and shattered in their own way, and told from the perspective of a grounded, desperate individual struggling to keep their identity under wraps. The realistic characters moments in The Inspection, finely tuned performances, and detail oriented direction more than make up for some storytelling hiccups and contrivances along the way.

The Inspection opens in select Canadian cities on Friday, December 2, 2022. 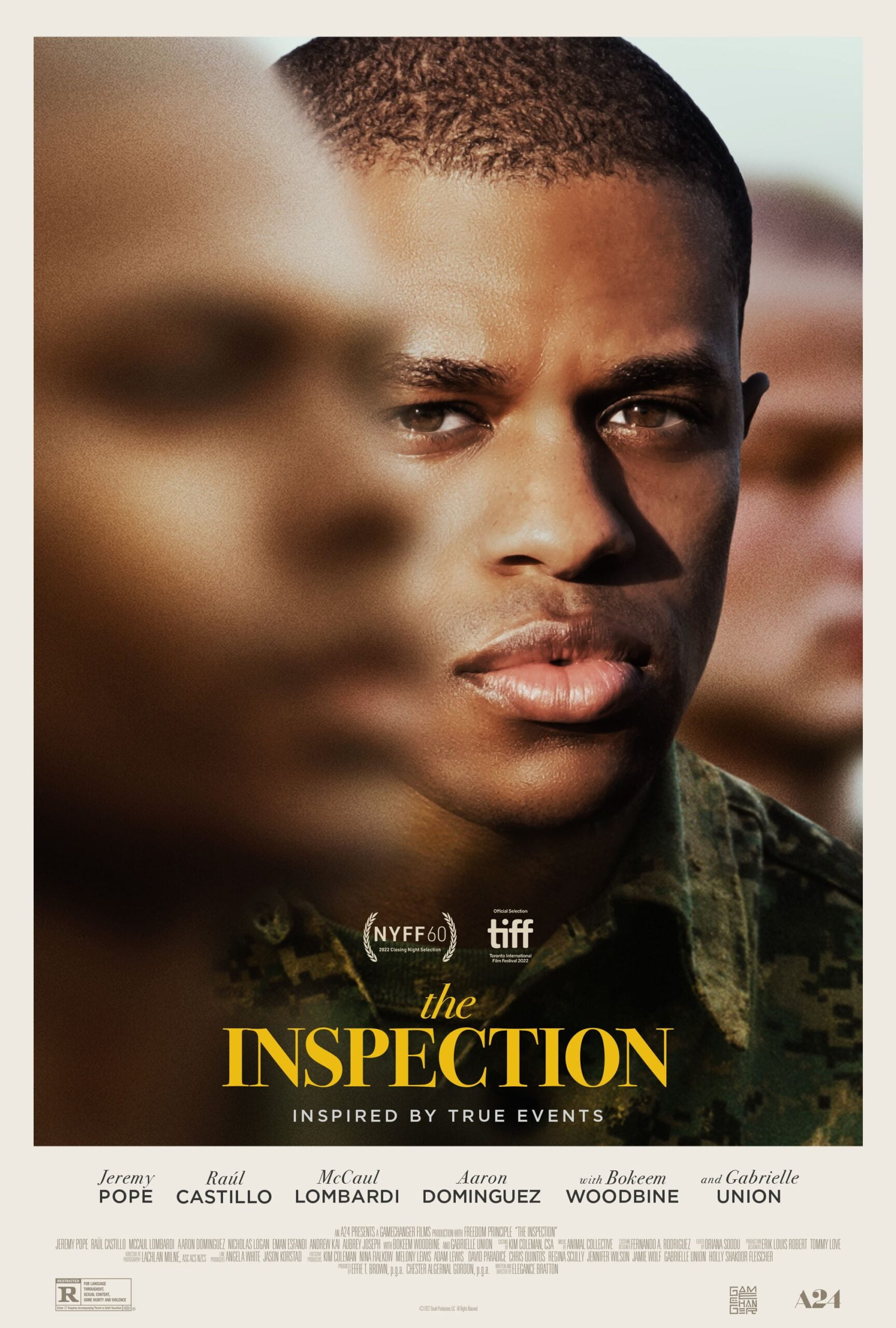