‘Perfect Stranger’ not so thrilling 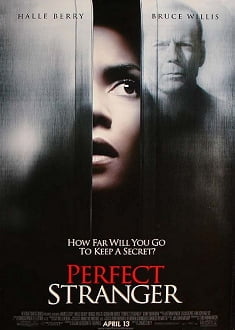 Legendary movies are made by their endings. Even the stalest film on the planet can turn itself around, at least to some extent, with a snappy ending that either flips you on your ass, or explains the films events in a way that makes perfect, startling sense. Perfect Stranger certainly has a snappy ending, but only after plodding along for almost an hour and a half before turning the audience on its ass with a surprise ending that feels like we’ve somehow been cheated out of a fulfilling resolution. Give me a surprise ending any day, but don’t cheat me with an ending that doesn’t make any sense.

Starring Halle Berry as Rowena, an investigative reporter who isn’t afraid to fake her way in to a situation to break a big story, the film revolves around one strange murder where everyone seems to be culpable and Rowena is determined to find out who’s responsible. Along the way we meet the extremely creepy Miles (Giovanni Ribisi), Harrison Hill (Bruce Willis) the twisted ad exec, and of course, the jealous wife – Mrs. Hill (Paula Miranda). At points it almost feels like you could pick a name at random and they could be the killer. If that isn’t bad enough, Berry provides a hammy performance from start to finish – only showing a glimmer of talent when she’s really cornered into it.

Director James Foley works the angles of the story, bringing in doubt as much as possible, and making a rather moody, almost disturbing picture, but ultimately when the film is based on a trashy script, you’re going to end up with a trashy film. The dialogue isn’t exactly laughable, but it’s weak and cheesy, and the story fails to offer anything beyond simple reality. It also happens to fit perfectly into the realm of all those classic Hollywood “dramas” where the motives are weak and the characters seem like afterthoughts.

What really sucks is that Perfect Stranger has everything it takes to be a great film. The cast is actually pretty good, the concept is both interesting and pushes all the right buttons, and the cinematography is eye-catching. The film only shines through at a few points though – Ribisi is creepy, but always dead on, Willis is criminally under-used, but an interesting choice for the powerful boss character, and I was even decently impressed with how the film deals with everyone’s online personalities.

With its flimsy plot, these elements aren’t enough to save Perfect Stranger from being another fluffy film that caters more to star power than anything else. It also makes me wonder if Halle Berry’s Oscar curse hasn’t gotten the better of her career.