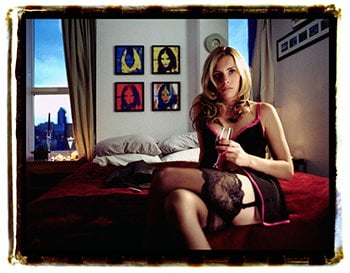 I first met writer/director Doug Karr almost two years ago when he started filming Anniversary Present. From the first few minutes that I talked to him I realized that he’s not the kind of guy, or filmmaker, who will ever sit still. Once an opportunity presents itself he’ll be off to work on his next idea. He had already made a name for himself with two previous films, The Straitjacket Lottery and the documentary Lifecycles: AIDS in Malawi, but it was clear from everything he said that Anniversary Present was also part of his goal to take the next step toward longer films and bigger productions.

Starring Liane Balaban (New Waterford Girl) and David Alpay (Ararat) in what can only be called a tale of jealousy and revenge, Anniversary Present is an eight minute Super 35mm short film that Doug wrote and directed. As Doug put it, “Anniversary Present looks at how when people try to gloss over their problems things often blow up in their faces. It’s about how sexuality really freaks people out and makes them act in totally irrational ways.”

Late last month I got an email from Doug telling me that the final product is out, and as of this month Anniversary Present is starting to make its way around the festival circuit. If you’re in Toronto you’ll be able to see the film at the Worldwide Short Film Festival from June 12 – 17, or in New York City you can catch it at the ACE Film Festival from August 24 â€“ 25.

“I’m ecstatic to have these fantastic festival premiers at two of the best short film showcases in the USA and Canada. Both Liane and David are performers who’s work I’d admired for years, so this film was an incredible exciting creative experience for me; working with two huge talents who’ve since become my great friends. Production was a roller coaster that really paid off in the final product, but the best part of all was that nobody got incinerated when we torched a car in an enclosed parking garage,” Doug said in the press release. 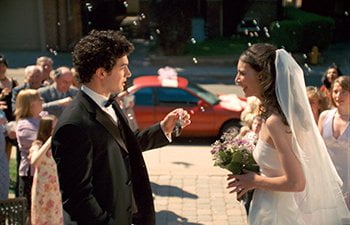 It’s also worth mentioning that getting the film ready to shoot was a trick unto itself. Amidst all the effects and stunts the team had to pull out all the stops to get what they needed to shoot. Production designer Allyson Smith looked at return policies for anything they bought; the team was made up of pros and volunteers who wanted to make a great film of course, but they also really wanted to burn a car in a garage; costume designer Deirdre Sheehan had to dance in a sex shop window to get the lingerie they need for the shoot; and director of photography Guy Godfree apparently even made a camera body-rig in his living room.

The result however is a stunningly fresh and well-paced film that feels like it was meant to happen. From the story and the actors to the sets and stunts, it’s a smart film that knows how to make every shot pay off in the end.

Check out www.anniversarypresentmovie.com to see the trailer and for more on the film. You can also catch the film on TV in Canada on the following stations and times: