The avalanche of tablets of all shapes and sizes has been growing for a while now, but aside from Apple, Samsung is one of the few companies with a tablet that bears remembering in the cluttered device marketplace. Looking at the Samsung Galaxy Tab 10.1, I was impressed with what the tablet had to offer, and if you have had experience with the Samsung Galaxy phones the company has been offering for years, it will seem instantly familiar.

Running on Google’s Android Honeycomb operating system, the predecessor to Ice Cream Sandwich, Samsung Galaxy Tab is a well-rounded tablet that is fast, has a great design, and boasts a bright screen with above-average graphics.

Picking up the device, it is almost identical in weight to the iPad, but somehow it feels a bit lighter and more easily balanced in the hand. Unlike the iPad, which has a back panel that feels almost slippery, the back panel of the Galaxy Tab has a finish that feels easier to grip, while also offering a better shape. The controls, including power and volume rocker, are all laid out on the top of the tablet, when viewed in landscape with the camera at the top, with no built in controls on the front otherwise.

Aside from those controls, the slim, sleek tablet has stereo speakers on the sides (rather than the back like the iPad 2), the dock/power connector port on the bottom, an audio jack on the top, a 2MP front-facing camera and a 3MP back camera with an LED flash. In the case of the 4G model, a SIM card port is on the top edge of the tablet.

Starting up the Galaxy Tab 10.1, the tablet shows off some of its brains, beauty, and brawn with quick response and loading times, courtesy of the dual core processor, and sharp, bright, and colourful graphics thanks to the WXGA 1280 x 800 resolution display. Under normal use, the tablet is very fast, switching easily between running applications, and powering games and video with ease. The only flaw I saw occasionally came up in games, where the display was just a little shy of perfection when rendering colours and pure black, but the Galaxy Tab’s is well ahead of most competing tablets all the same.

In testing out the tablet, I tried a range of applications that came with the device, plus a few special apps. Primarily, I tested out app favorites, including Angry Birds Space, Pulse News, Google Sky Maps, Netflix, and of course Google Maps and Gmail. Across the board the tablet ran the apps beautifully, and exactly as they should, with only a little lag from the amount of email I was running through Gmail.

While Honeycomb is no Ice Cream Sandwich, in terms of features, the OS worked very well on the Tab. If you have never used it, the design highlight of the OS on the Galaxy Tab is the highly functional rotating toolbar that lets you flip between the task manager, calendar, and the navigation and notification bar. Being able to quickly jump between these options means the Tab does not need a dedicated button like the iPad, and it’s frankly a much more eloquent design since the hard wired button takes you out of the flow of the OS.

Testing out the Galaxy Tab’s battery life, Samsung boasts that the tablet provides “up to 9 hours of continuous video play on a single charge”. While I can’t verify those claims, the battery life is very impressive, and lasted well over 6 hours with standard use. Gaming and other processor-intensive apps, or using Wi-Fi and Bluetooth, will eat into the battery life, of course, but even with a lot of battery consumption, the Galaxy Tab runs neck-and-neck with the top tablets on the market.

All these results made the Samsung Galaxy Tab a very memorable and likeable tablet that exceeded my expectations. For anyone who does not need the 4G option, the Wi-Fi only version retails for a very affordable $499, while some retailers also sell the 4G model as part of a wireless package, which will reduce the up-front cost.

My only major complaints with the Galaxy Tab would be the sub-par cameras, which are just not high resolution enough (and the LED flash is a bit too weak), and the price points, which could be more competitive across the board. Otherwise, I’m a big fan of the Samsung Galaxy Tab, and I would recommend it heartily to anyone who has been waiting to buy a tablet. 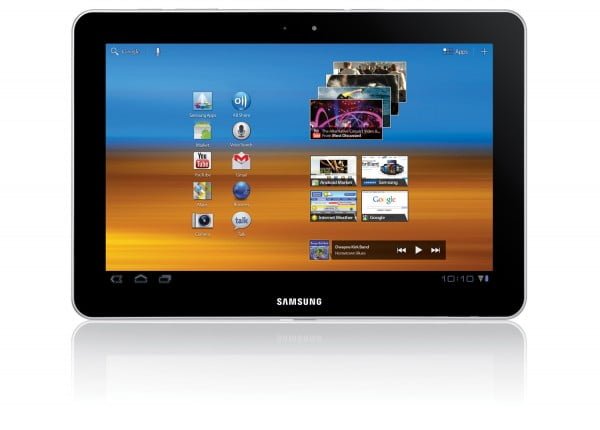