Since 2002, Canadians have watched our American neighbours find, and lose, love on reality TV. Finally, The Bachelor‘s roses are blooming on this side of the border. Last night’s hotly anticipated series debut for The Bachelor Canada saw 25 shiny-haired hopefuls arrive by limo to compete for the heart of our own square-jawed, all-Canadian Bachelor.

Brad Smith is a 28-year-old former CFL star and the son of a Canadian Senator. With a shiny white smile, he tells us that he’s at a point in his life where he’s ready to settle down and ready to meet someone special. He’s ready to get engaged and ready start his life, because we all know life doesn’t begin until you put a ring on it.

After we’ve been subjected to a sufficient number of montages of Brad emerging from pools shirtless, tossing footballs, and looking pensive, it’s time to meet the ladies.
Enter host Tyler Harcott, who has clearly completed his degree in the “Chris Harrison” school of reality-TV hosting. Tyler and Brad rap about how ready he is (drink!) for love and then make their way outside to start the inaugural limo parade.

In true Canadian fashion, the introductions are polite, occasionally bilingual, and the conversations steer towards hockey.

The most intense entrance award goes to Whitney who gets all fatal attraction as she presses herself against Brad and insists that she’s waited too long to let go. It’s okay though, Brad’s into it.

In the “you can’t script this stuff” category, doe-eyed Fawn almost collapses on the driveway like her baby-deer namesake thanks to her six inch heels.

An angelic choir soundtrack plays as adorably sweet small-town Anna Farris look-a-like Chantelle, a recent bible college graduate from Sylvan Lake, Alberta. God bless those Bachelor producers who clearly have a sense of humor since they followed that up with a bow-chica-wow-wow soundtrack for Playboy model mom Melissa Marie.

And just in case you needed reminding that this is the Canadian edition of the Bachelor, toque-wearing, gun toting Mindy J. from Rocky Mountain House, Alberta shows up with hiking boots under her evening gown. 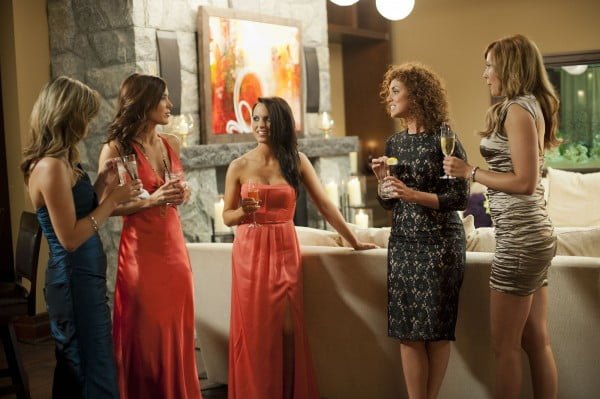 After all of the ladies have made their way from the limo to the open bar, the real fun begins. As usual, there’s the requisite catty commentary from the women as Brad bounces around the mansion. The ladies tag in for snuggle time on the couch with seemingly overwhelmed Brad who, despite being a professional athlete, doesn’t seem to know how to handle himself in a “Love Square” situation.

After a rousing round of Spot the Fake Boobs, former Bachelorette star and B.C. native Jillian Harris pops by the McMansion for a visit to convince us that she’s still relevant and to help Brad interview the girls. Jillian makes sure that hunting enthusiast Mindy J. gets relegated to the friend-zone faster than you can say Matching Chest Tattoos.

Lady-in-red Whitney goes on to score the first impression rose from a smitten Brad who seemingly can’t tell the difference between confident charmer and crazy-eyed stalker. The producers seem keen to convince us that Whitney is Canada’s answer to Courtney Robertson, the black widow/model who won the heart of Ben Flajnik on the last season of The Bachelor.

Naturally, none of the other women agree with Brad’s decision because no one ever likes the First Impression Rose girl.

Gabrielle, an outspoken law student from Oakville, isn’t afraid to show her discontent and “give it to you how it is.” Apparently, this is fancy lawyer-speak for repeatedly calling Whitney “skanky.” Something tells me that her brash behaviour and refusal to tone it down will be a highlight for viewers this season.

Editor’s Note: “Outspoken” might be another word for it. 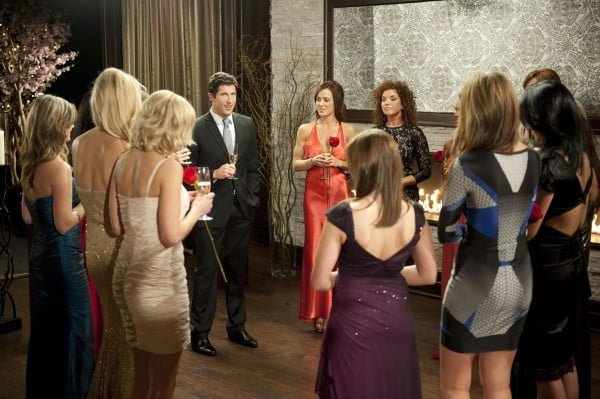 Sadly, the tension-filled cocktail party has to come to an end as there’s that pesky matter of the Rose Ceremony to deal with. Roses are delivered to the likely suspects and the rejected nine ladies are sent to take a teary-eyed stroll down a strangely secluded cobblestone path away from the mansion.

Fan favourite Bubba, the foul-mouthed 27-year-old real estate agent from Toronto, also didn’t make the cut. I guess she’ll have to find someone else to make “sweet passionate love three times a day” with.

Sixteen women remain and if the teasers are any indication, the remainder of the series looks to be very promising.