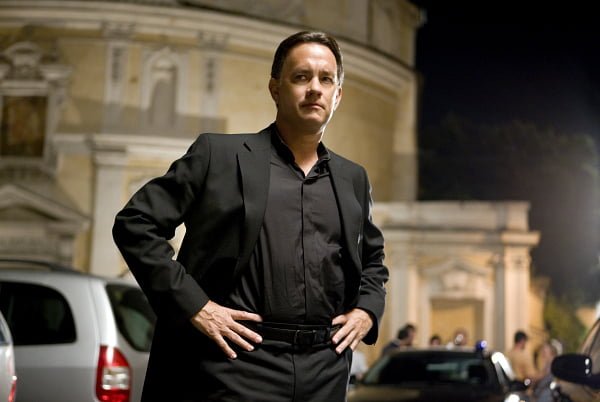 Coming out this week, Dan Brown‘s Angels & Demons has Tom Hanks solving riddles, all in the name of saving the Vatican from the Illuminati; Reese Witherspoon and Vince Vaughn co-star in the holiday comedy, Four Christmases; plus a look at Shorts, and Disney’s Snow White and the Seven Dwarfs.

Novelist Dan Brown has stirred up no end of controversy with his interpretation of how history and religion might converge, giving him a unique notoriety with members of the Catholic church. Even in this second book you can see how Brown enjoys stepping on a few toes, just to see how it might push people’s buttons.

Written two years before The DaVinci Code, Brown’s Angels & Demons has professor Robert Langdon on a quickly-paced adventure that is actually a great read. Not award-winning great, but I can at least say it’s better than the movie.

In the film, Langdon has been called to help the Vatican as they face the threat of one of history’s most well-known secret societies: the Illuminati. Following a path set down hundreds of years ago, Langdon must try to stop the group from killing four cardinals, who are all at risk because of an age old feud between science and religion. At the same time a hidden bomb is counting down to the destruction of Vatican City, and the whole mess is tied into one great big knot that Langdon must unravel before midnight.

Tom Hanks once again stars as Langdon, who plays the expert historian/adventurer, while Ayelet Zurer co-stars as his latest partner, the scientist Vittoria Vetra.

Frankly, I also consider Goldsman one of the worst writers in Hollywood, shovelling out the kind of cheap plots that the industry flocks toward, which don’t work all that well on screen, but somehow draw in decent box office dollars. On the other hand, Koepp has actually written a few interesting scripts, but I think for the most part his plots tend to have a see-through approach that certainly doesn’t do Angels & Demons any favours.

With the right pieces, this could have still be a great film, even an enjoyable one, but with all of the boring elements piled on top of the cuts, the weak acting by Hanks, and the cheap plot, Angels & Demons is not worth watching. Maybe it wasn’t as bad as some of the duds we’ve seen this year, but it’s such a disappointment that I’ve found a new appreciation for The DaVinci Code film, which if nothing else left me with a sense of mystery. On the other hand, Angels & Demons reminded me of a bad episode of CSI, right down to the half-baked plot.

And speaking of half-baked, the real bomb of the week is the 2008 holiday film that paired Reese Witherspoon and Vince Vaughn as a couple trying to endure four separate Christmases, all in one day.

Ditching their ruined plans to go on vacation in the sun, the couple ends up visiting all four of their parents, who have been divorced for some time. Stumbling over all sorts of skeletons from each others childhoods and enduring an unending line of annoying relatives, the couple has to do their best to survive what could be the biggest test of their relationship.

While I’d like to give both of these actors, and all of the amazing co-stars, the benefit of the doubt, there is no missing the stench of this film. From the opening credits, all the way to the end, the film is thick with purposeless characters, flat jokes, and no sense of any holiday spirit whatsoever.

Between the dud of a script and director Seth Gordon’s inability to turn even the best moments into heartfelt laughs, Four Christmases is a forgettable film that I wish I had never watched, and it certainly won’t be in my list of annual holiday movies.

In this farcical family comedy set in the everyday boring world of your average suburb, an 11-year-old finds himself the proud owner of a magical rock that grants unlimited wishes. The problem is that wishes are starting to take over the neighbourhood, and once the adults get their hands on the stone, things get even weirder.

Written and directed by Robert Rodriguez, who also made the Spy Kids movies, Shorts looks like a far out hit, but it didn’t do very well with most critics, earning just 45% positive reviews on the Rotten Tomatoes website.

Justin Chang of Variety was one of a few positive reviewers who wrote that the film is “More zippy, diverting fun from Robert Rodriguez’s family filmmaking factory.”

Disney’s enduring classic returns to DVD and makes its debut on Blu-ray this week in what I can only call a must-own release.

Offering one of the most timeless tales, Disney has produced multiple packages of the film meant to give you options for the holiday gift-giving season. While I can’t recommend one over package over another, if you haven’t seen the film in a long time I would definitely suggest you take another look.