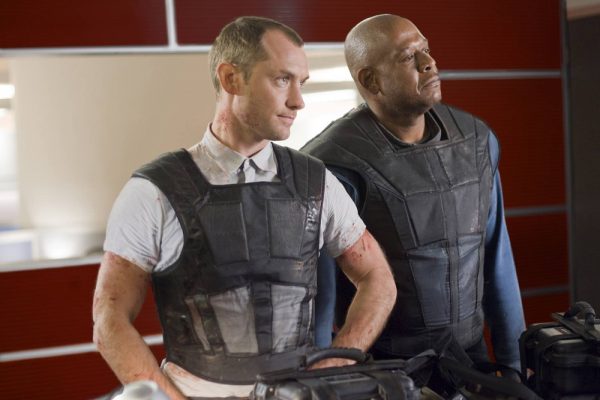 New this weekend in theatres: Jude Law stars in the futuristic action adventure, Repo Men; Gerard Butler and Jennifer Aniston buddy up for the romantic comedy, The Bounty Hunter; plus a look at the kid-friendly comedy Diary of a Wimpy Kid, and the IMAX film Hubble 3D.

The question has to be asked: is Jude Law an acceptable action star? He’s a likeable actor, he has appeared in dozens of great films, and obviously he has a way with the ladies, but these things do not an action hero make. What’s worse is that he’s chosen a questionably impressive action movie to test out his butt-kicking abilities; a film that frankly looks like it’s more laugh-worthy than thrill-inducing.

Set in a futuristic world where a company known as The Union creates expensive replacement organs, Law plays Remy, an organ repo man who hunts down people who haven’t paid their medical bills, taking back the property of his employers no matter what.

Cue the ironic twist when, much to his surprise, Remy suffers a heart attack on the job and the company puts him under the knife and gives him their latest high-tech product, which Remy definitely can’t afford. Forced to go on the run, The Union adds in another twist by sending his former partner Jake, played by Forest Whitaker, to hunt the former agent down and take back his perfect, fake heart.

While I never thought I’d say this, it’s become obvious that futuristic storylines are simply the easiest setting for directors who want to do wild and crazy things, but don’t have the ingenuity to come up with a plausible plot.

“The filmmakers want to have a company that has power over who lives and dies? Well, set it in the future.”

“Your story is cool, but bigger weapons would make it cooler? Go ahead, set it in the future.”

That complaint aside, whatever you say about Law’s career, or any of the film’s other co-stars, Repo Men simply looks terrible because it takes the script for granted and has a brain-dead concept that should only be attempted by talented B-movie directors who are willing to be a little witty with the subject matter.

Nick Pinkerton of the Village Voice was one of many critics who rebuked the film. “Another wholesale dystopian future,” Pinkerton wrote, “just like the last one.”

And Tom Meek of the Boston Phoenix wrote, “Repo Men should have offered some lacerating satire, but the derivative filmmaking and reality-show dialogue take the heart right out of it.”

From the director who previously brought us Hitch, Fool’s Gold, and Sweet Home Alabama, Andy Tennant’s The Bounty Hunter is a zany romantic comedy that stars Gerard Butler as Milo, a (surprise) bounty hunter who picked up the enviable job of tracking down his ex-wife and taking her to jail. With Jennifer Aniston playing Nicole, Milo’s ex, the duo will play chase across the city as a murder cover-up explodes around them, leading a number of thugs to their trail.

Far-fetched, silly, and predictably offbeat, The Bounty Hunter is getting a lot of buzz primarily for two reasons: it’s two stars. The film is simply coasting on the obvious eye candy, and the general star power of Butler and Aniston, while the trailers focus on the film’s hijinks, rather than the actual plot.

Lots of people are obviously going to line up at theatres to catch Butler and Aniston in a film together, but it’s hard to imagine that the film will prove satisfying.

At press time critics were lambasting The Bounty Hunter, giving it a nearly perfect 0% on RottenTomatoes.com with Kirk Honeycutt of the Hollywood Reporter commenting, “Silliness prevails in this lame thriller comedy.”

While Roger Moore of the Orlando Sentinel wrote, “Aniston doesn’t bring her old A-game to [the film]. But at least she’s not quiet and reserved and no-energy, her approach to too many roles of late.”

Based on Jeff Kinney’s acclaimed novel, Diary of a Wimpy Kid is the story of Greg, played by Zachary Gordon, a young kid trying to survive those early, formative years in your average middle school.

Surrounded by morons, set upon by bullies, and avoiding wedgies and swirlies at every turn, Greg dreams of the day when he’ll be famous and universally liked, but until then he will just have to try to follow all those unspoken school-yard rules, and make a few friends.

Following Greg’s “journal,” a title he insists upon, rather than the less impressive “diary,” the film is a coming-of-age story that has March Break weekend written all over it. With it’s unique kid appeal, and obvious charm, Diary of a Wimpy Kid is a great bet for parents looking for a weekend activity.

Ella Taylor of the Village Voice does point out a few flaws though. “Diary of a Wimpy Kid is sweet and funny at either end,” she wrote, “but in between, it sags with endless repetition of gross bodily functions and Greg’s torment at the hands of larger, angrier, or more popular kids — in that order.”

Lastly, the most exciting film opening in theatres this weekend, at least in my mind, is definitely the geekiest.

Narrated by Leonardo DiCaprio, director Toni Myers captured the intense work that went into repairing and upgrading the famous Hubble Space Telescope, which orbits the planet some 350 miles above the Earth’s surface.

Presented in both 3D, or 2D depending on the theatre you visit, the film takes a stunning look at what went into each step of reaching the telescope, repairing it, and then providing dramatic footage showcasing some of the most amazing visuals captured by the telescope over the last 19+ years.

Considering the science content, Hubble is certainly geared more toward film goers who want to learn something, as much as they want to be dazzled by visuals. Reviews have suggested that while the film could have been a bit more entertaining at times, this is still a tremendous film to see on the very big IMAX screens.

As Justin Chang wrote for Variety, “The newly resurgent 3D format gets an out-of-this-world showcase in Hubble 3D.”