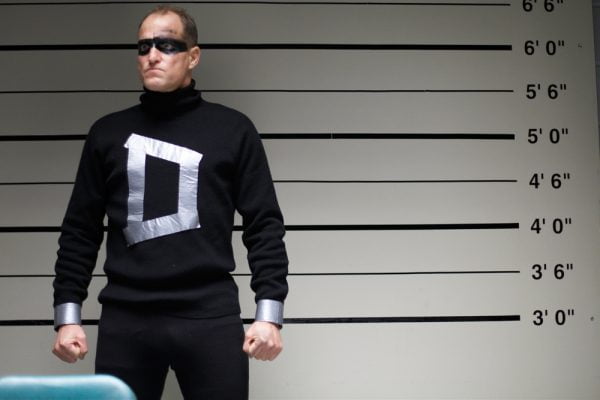 Woody Harrelson stars in this offbeat noir-ish dramedy about a wannabe super hero who doesn’t actually have any super powers. It’s of course an opportune time for a movie like Defendor to land on DVD, coming just a few days before the somewhat like-minded action-comedy Kick-Ass arrives in theatres.
The timing aside, Defendor has no problems standing on its own as a charming, dark, and comedic tale.

Defendor follows the slightly delusional Arthur Poppington, played by Harrelson, a guy who dons his special “Defendor” costume at night, seeking out crime in the hope of someday catching his nemesis, Captian Industry, a criminal he mistakenly thinks killed his mother.

Premiering last year at the Toronto International Film Festival, director Peter Stebbings twists Defendor’s premise in just the right way to make it work. It’s not a spoof of a comic book action movie, and it’s not quite a farce, or a noir-drama either. Defendor sits somewhere in the middle of those converging themes, and is all the more interesting because of that.

Harrelson is both funny, somewhat scary in his own little way, and yet touching in the role of this man who essentially can’t deal with reality. His co-stars, Kat Dennings and Elias Koteas, match him perfectly, with Dennings playing a friendly prostitute, while Koteas plays the corrupt police detective Chuck Dooney.

Overall a very enjoyable film, from the lighter moments, all the way to its dark recesses. The DVD also comes with a few average features including a very good commentary by Woody Harrelson, Kat Dennings and the filmmakers, plus deleted scenes and outtakes.

Pirate Radio may not be based on a true story, but it sure wants you to believe that it’s based on more than just a killer soundtrack.

Set in Britain during the iconic 1960s, Pirate Radio is about a group of disc jockeys operating a quasi-legal radio station on board a ship that’s anchored off the coast of England. Led by The Count, played by Philip Seymour Hoffman, the collection of oddball DJs are willing to do anything to keep playing the music they love for all of the millions of listeners who keep tuning in.

Loaded with rock classics from the era, Pirate Radio is a comedy with some heart, and lots of rock, but it’s maybe not what you might expect. Although the trailers make the film look like a true story, the truth is that it’s more of an homage than anything else.

The film was released in the United Kingdom under the name The Boat That Rocked, but it didn’t do all that well, something director Richard Curtis seems apologetic for on the DVD.

For it’s North American release, the director cut twenty minutes of film, which may address one of the chief complaints that the film was simply too long. Since I never saw the original cut, I can’t comment on what it was like, but I can say that the version that arrives on DVD today is a lot of fun, especially since it takes a light-hearted approach to everything from the relationships to the station’s troubles with the government.

That light approach works well for the cast, and it makes parts of the film particularly buoyant, if you’ll excuse the pun, but it does hurt the story.

On the bright side, the cast really is perfect. Hoffman, Bill Nighy as the station boss, Quentin, and Tom Sturridge as Young Carl, make Pirate Radio an inviting place to lounge for a while. Throw in the groovy tunes, airy script, and general frivolity of the plot, and the film is fun from start to finish.

The problem is that Pirate Radio doesn’t really go anywhere. For all the fun, you can’t help but feel like the plot, like the boat, is anchored at sea, drifting a few meters at a time, but essentially staying right where it started.

There is the threat that the government is doing something, but that threat is hardly convincing at even the best of times, and even Kenneth Branagh playing Minister Allistair Dormandy as the best jackass he can muster can’t move things along.

Because I enjoyed the lighter side of the story so much, I am recommending Pirate Radio, but the point of the film is to enjoy these freewheeling DJs and their mini adventures because little else materializes throughout the otherwise aimless story.

Features on the DVD include a number of deleted scenes, which make up the brunt of what Curtis must have cut from the film, plus a fairly entertaining commentary with Curtis, actors Nick Frost and Chris O’Dowd, and producer Hilary Bevan Jones.

Check out the classic A Nightmare On Elm Street on Blu-ray, not to mention Ron Howard‘s epic Apollo 13 starring Tom Hanks.