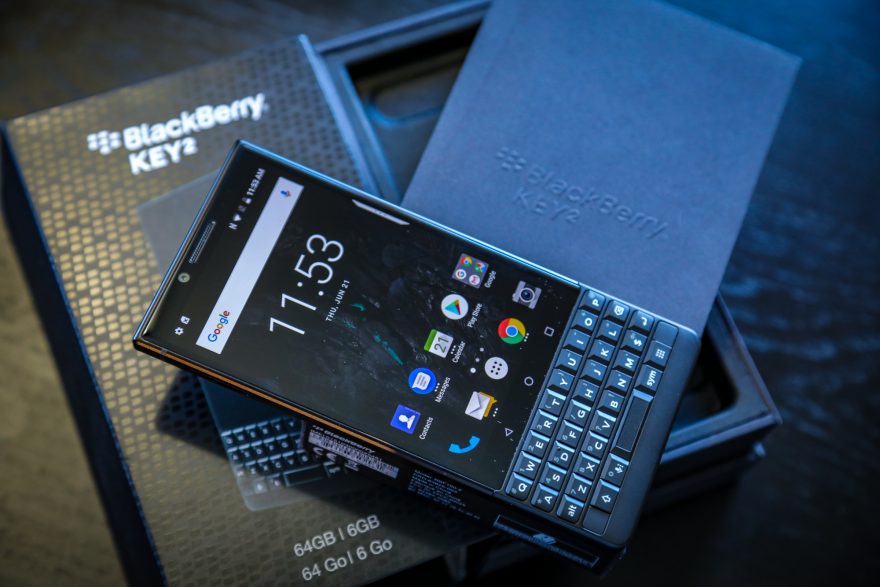 The BlackBerry Key2 is exactly what you expect, and does exactly what it needs to, and that’s exactly why I love it. If you’ve used a BlackBerry before, it’s a familiar update, and if you’re an Android user, the Key2 is easy to get used to, with the added benefit of having a dedicated keyboard.

The Key2 could have used a few upgrades, like a better camera, but for the users who type a lot, the device is leaps and bounds beyond the experience on most smartphones.

The BlackBerry Key2 is a streamlined, rather attractive update on the BlackBerry design from back in the day, and in some ways I’d even call the design superior to other Android devices.

The phone features a 4.5″ display, made with impact resistant Gorilla Glass, in a sturdy aluminum alloy frame, and features a textured non-slip back.

The Key2 fits in your hand perfectly, and feels very comfortable and easy to hold thanks to squared-off sides, with rounded corners and edges, which makes the phone much easier to hold than some counterparts, and it’s just about the perfect weight.

The top of the device features the headphone port, while the right side features the volume rocker, power button, and the convenience key, which can be mapped to act as a shortcut to three of your favorite apps.

The bottom of the Key2 features stereo speakers, and a USB-C port for charging and connecting to other devices.

On the back of the phone, the dual-cameras stick out a little bit, like most phones today, but even without a case it lays pretty flat on tables, although it did make me nervous that I was going to scratch the glass cover on top of the lenses.

On the front of the phone, the screen feels a little cramped, because of the border around the display and the amount of real estate that the keyboard takes up, but for many users, the screen size is good, and you can use the keyboard like a trackpad to scroll through pages and content on your phone, which also makes the keyboard nicely mutli-use even when you aren’t typing.

There’s also a new Speed Key in the bottom-right corner of the keyboard, so you can program actions or apps. Press the Speed Key and long press A, and you can open Contacts, or Chrome, while a short short press can open Instagram, or something else entirely. That effectively gives you 52 hot keys, to get into anything much quicker than scrolling through your apps.

Right off the top, the keyboard is obviously the BlackBerry Key2’s greatest weapon against any other device. If you type a lot, no other phone beats the Key2. The QWERTY keyboard is tactile, easy to use, and just as useful as it was when BlackBerry debuted the original devices all the way back in 1999.

The phone’s 3500 mAh battery is also better than a lot of competitors, ensuring the Key2 can last all day, for most users, thanks in part to the display and chipset, which don’t consume the battery as much as higher-demand alternatives.

The cameras, meanwhile, are good for most users, but far from revolutionary. Considering the price point, the cameras are great for average users who don’t need extreme megapixels. The dual back-facing cameras are 12 megapixels, with one zoom and one standard, and there’s an LED flash. The cameras can capture in HDR, with 4k video and 30 fps.

Most of the time, the cameras work well, although they don’t do exceedingly well in all low-light conditions, but the zoom is very useful, and the focus is good.

As well, the Key2 includes a solid 64GB of internal memory for your files, photos, and videos, which is more than enough for average users. You can also expand the memory with the microSD card slot.

In terms of software, BlackBerry fans will know exactly what to expect, as everything is by-the-books from recent models. The Productivity Tab being one of my favorite features, it’s the standout from any other device, letting you jump right into your calendar, email, tasks, contacts, and favorite apps with a single swipe to open the tab, and then a click to jump into any of the widgets.

BlackBerry Hub brings together all of your messages, from calls and texts, to emails and social notifications, and that’s frankly a beautiful thing. The Hub really does simplify finding messages and notifications, and it’s nicely clean, and easy-to-use.

Finally, there’s the BlackBerry security, and for business users, it’s an important feature. The DTEK app will notify you about app permissions, and the Locker lets you protect sensitive information in case your phone ever gets lost or stolen. Overall, the security is on par with other brands, and perhaps exceeds expectations in terms of being aware of app permissions.

If you’re a user who wants or needs a dedicated keyboard on your phone, there really is no competitor next to the BlackBerry Key2. The style and design was designed for people who type a lot, and the phone looks classy and speaks to business users. The features are also designed for those users, from security and brilliant hot-key support, to the Productivity Tab and Hub.

Giving up the device real estate for a keyboard is a definite trade off, and I’d also like to see better low-light performance in future BlackBerry models, but that compromise is worth it for the right users.

The price is also average, available for around $850 without a contract from most retailers, and $99 on a two-year contract from Bell and Rogers.

If you’re looking for an Android phone with a dedicated keyboard but with a slightly cheaper price, the new BlackBerry Key2 LE is a good alternative, with a less powerful chipset, less RAM, and 32 GB of internal memory. At $599 though, the price is great, and on a 2-year plan, it’s available for $0.

Both devices are available from Amazon.ca, Best Buy, Wal-Mart, and Staples.