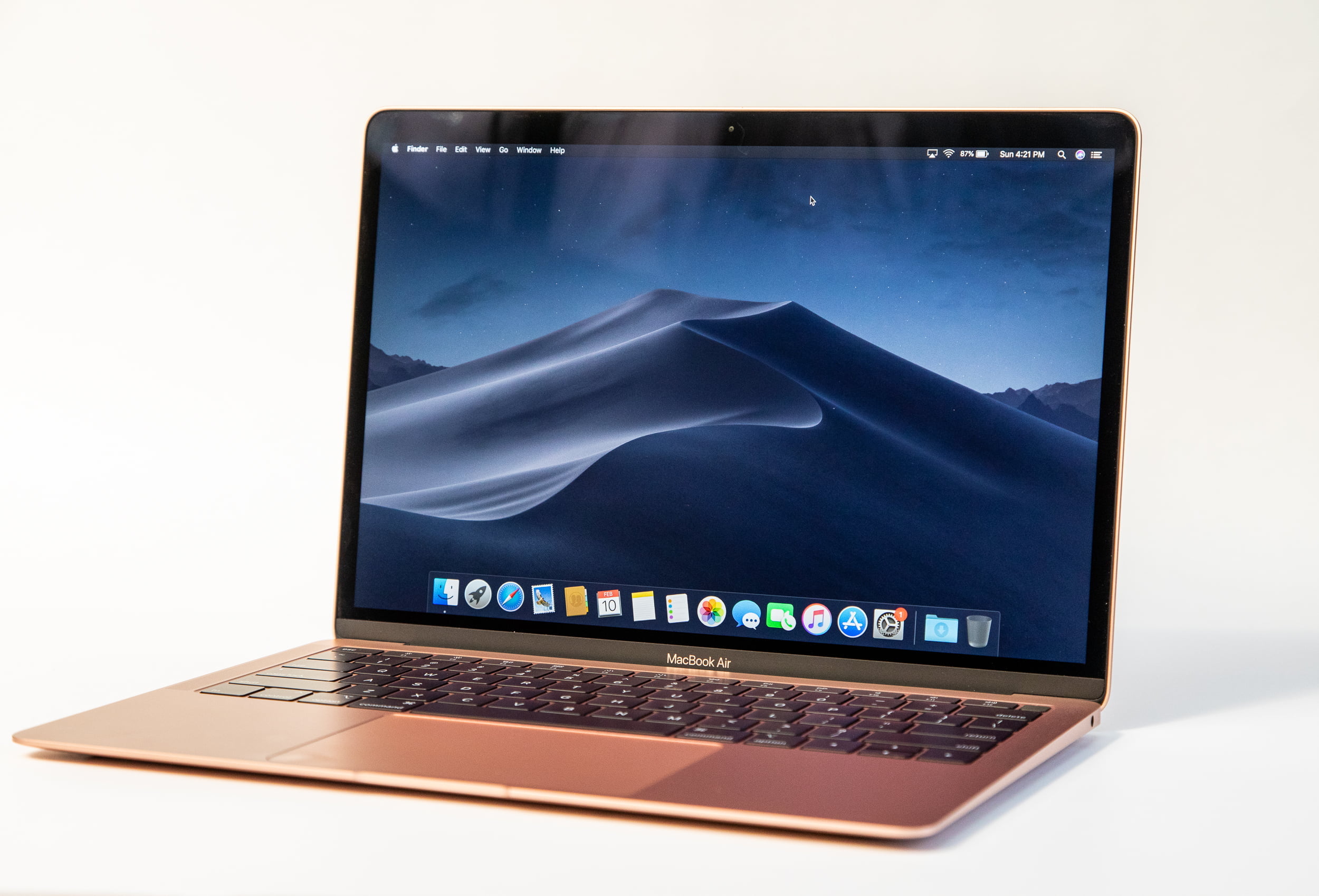 Apple’s new MacBook Air is a gorgeous laptop, and it wows at any angle. Released last fall, the laptop comes in three colours–gold, silver, and space grey–and while the space grey is distinguished, gold is vibrant and eye-catching.

The laptop has an impressive, sturdy design, that you expect from Apple laptops, and enough power to make it a solid solution for most users, whether you need something for presentations, email and browsing, or photo editing and design.

Here’s my breakdown on the laptop, and some things you’ll want to keep in mind if you’re thinking of buying one.

Otherwise, the specs on the Air are identical, with a 1.6GHz dual-core 8th-generation Intel Core i5 processor, and Turbo Boost up to 3.6GHz, 8GB 2133MHz LPDDR3 memory, an Intel UHD Graphics 617 card, plus Touch ID, the Force Touch trackpad, and two Thunderbolt 3 ports.

In terms of the specs, the Air offers enough at the base level to handle less complex video projects on Final Cut Pro X, or Photoshop, or Lightroom, but Adobe’s Premiere Pro will be a stretch since it really does need more power. If Premiere Pro is something you need, that’s the point where I would suggest you need a MacBook Pro with an i7 processor and 16 GB of RAM.

However, the Air has more than enough power for most users, whether you run a lot of programs at once, or have a more demanding game in the App Store. The price is also just right considering the impressive Retina display, and the specs and build.

The overall shape and size are just about perfect for a laptop that you can take anywhere. The Air is 11.97″ by 8.36″, and 0.6″ thick, which is nearly identical to some other light 13″ laptops, but just a bit thinner. It’s also shaped like a wedge, with the thickest part on the hinge side, which feels pretty natural when you’re holding it.

At the thinnest point, the Air is a mere 0.16 inches thick.

For the weight, the Air is 2.75 pounds (1.25 kg), which is just enough to make it feel light, but not so light that it’s awkward if you’re using it on your lap.

Compared to older Macs, the Air has a reflective Apple logo, rather than one with a light in it, which was a great choice. The reflective logo still looks sharp without wasting any of the system’s power.

And the laptop is fanless, so while it might heat up a bit, you won’t be listening to it whir away as you work, which is fantastic.

In terms of the laptop’s ports, the MacBook Air has two Thunderbolt 3 USB-C ports, which means you can plug a range of new devices into it without needing an adapter, and you can easily use a USB-C dock with the Air.

The Thunderbolt 3 ports support charging, DisplayPort, and transfers up to 40 Gbps, or up to 10 Gbps using USB-C 3.1 Gen 2.

For anyone coming to the Air with older devices, and standard USB cables, you’ll need a dongle or adapter to plug in, but considering technology companies are moving away from the old USB format, you’ll need to make the switch to USB-C anyway.

Lastly, there’s the keyboard. The difference with the air is that the keys don’t press down very far, so for some of us, coming from desktop keyboards, it can feel like you’re attacking the keyboard with too much force at first. The keys also don’t provide a lot of feedback when you press them, since they don’t press down very far, but after typing on the Air for a little while, you will get used to it fairly quickly.

In the top-right corner of the keyboard you’ll find the Touch ID key, which is also the power button. Press the button down to turn on the laptop, and then hold your finger on top for the fingerprint sensor, which worked very well in my tests. Logging in with the Touch ID sensor felt almost instantaneous compared to typing in a password or even using facial recognition on other systems.

I would call the 13.3″ display on the MacBook Air just about perfect in terms of size. The screen has very small bezels, and the 2560 x 1600 pixel resolution, which works out to 227 pixels per inch, feels like a lot of space to work with, and it’s very crisp and clear.

The viewing angles on the Air are also great, and much-improved over the older model Air. About the only drawback is that the Air’s screen brightness is a little lower than what you’ll find in the MacBook Pro, but that’s to be expected, and in most conditions it’s not really that noticeable.

For video calls and selfies, the Air features a very good 720p FaceTime HD camera, which worked well generally. Like most laptop cameras though, it does require decent lighting for the best results.

The speakers and audio on the Air were very, very impressive. Outside of the overall design and resolution, I think it’s safe to say that the speakers were one of my favourite parts of the laptop.

In an average-sized room, the Air boasts enough power and quality to replace your average small speaker, and that includes good bass, and mid-range sound. For a laptop, the sound is very rich, and makes any song sound fantastic.

Battery life on the Air is otherwise good, but not exceptional. Apple suggests you should be able to get up to 12 hours of web browsing, or 13 hours playing movies on iTunes, and as much as 30 days of standby time.

Like most estimates, those numbers may be a little higher than what you’ll see, but the battery did last well for me overall. For some reason I did see an issue with standby time though, with the laptop fully discharging over a 3-day period where I didn’t use it, but that only happened once in my tests. Otherwise, the 50.3 watt hour lithium polymer battery was strong enough to keep me going for a full 8-hour day with average use between browsing, music, and video at about 70% screen brightness.

Finally, let’s talk about macOS Mojave, which is a serious upgrade for the Mac, especially over previous OS versions.

For one thing, I love the new Dark Mode for Mojave, which is gorgeous and easier on the eyes too. Dark Mode essentially uses greys and darker shades across backgrounds and the dock, which makes it easier to pay attention to whatever you’re working on.

Mojave also feels slicker, faster, and more sophisticated than anything I’ve used on Apple before. There are too many features to get into in one review, but everything from FaceTime to screenshots are easier and better integrated overall. The addition of Continuity Camera is a big deal too, letting you take a photo on your iPhone and insert it on the Air almost instantaneously into Mail, Messages, or Notes.

While I tested the Air, I also had the chance to play Alto’s Adventure by Toronto’s Snowman game studio. The game is beautiful and charming, and artfully done, and on the Air it looks amazing.

The outside of the Air is made from 100 percent recycled aluminum, and on the inside, the laptop has a mercury-free display, arsenic-free glass, and it’s BFR, PVC, and beryllium free.

Power users may find the MacBook Air a bit lacking, especially with programs or apps that require a lot of the CPU, but most business users, students, professionals, and general users will find a lot to love. From the design and battery life to the display and Mojave, the Air is a great, light and portable laptop.

For more information about the MacBook Air visit apple.com.