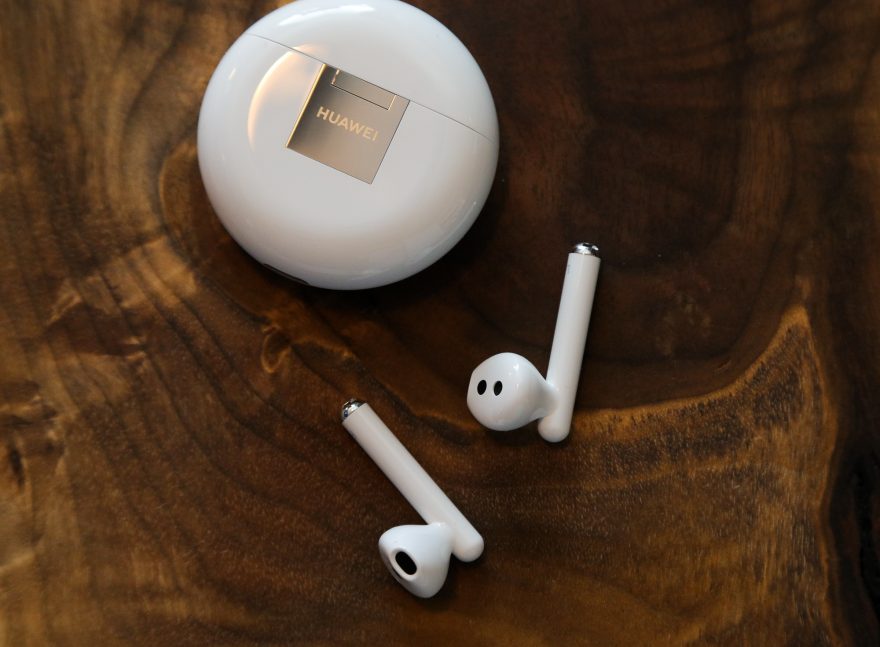 The new earbuds are open-fit, so they feel natural, and that’s frankly a nice change from all the Android earbuds with rubber tips that fit into your ears. I wore the FreeBuds for close to two hours and they never irritated my ears, unlike some other brand earbuds.

The trade off is of course that you can sometimes hear outside noise with the FreeBuds, because they don’t have a seal around the earbuds, but depending on what you’re doing, that may be preferable.

Huawei has also included adjustable noise cancellation that can help you focus on what you’re listening to. That noise cancellation works well in some conditions, and it may just take adjusting it a little to get the right results, but it doesn’t always work.

For instance, when I was out walking to the store, I didn’t find the noise cancellation worked as well as indoors. The sound was still good outdoors, and aside from very loud noises, it was easy to focus on what I was listening to.

In terms of playback, FreeBuds 3 last up to 4 hours on a single charge, and using the case, you can get up to 20 hours. Charging takes about 1 hour for the case, with the USB-C cable, and the same amount of time for the earbuds when they’re in the case.

You can also charge them with Qi wireless, but that will take a bit longer of course. With reverse wireless charging, I could even charge the FreeBuds with my Huawei P30 Pro, which is helpful if you really need a small charge up.

For the sound, the earbuds have a 14.2mm dynamic driver, and I was impressed with the levels of bass, and overall clarity of everything from music to gaming, and movies.

It’s interesting to note that the Huawei FreeBuds produced fuller, richer sound on my P30 Pro than with other Android phones. You get a bit more, in terms of features and sound, from Huawei’s own phones, in part because the earbuds were made to work especially with EMUI10.

With a Huawei phone, the earbuds also pause when you remove the earbuds, for example.

FreeBuds also support double-tap shortcuts, so you can assign an action to each earbud. Those shortcuts are limited to only four actions (play/next, play/pause, wake voice assistant, and turn noise cancelling on/off), but that can be useful.

Sometimes the shortcuts didn’t work as intuitively as I would have liked, but overall it did mean I could pause, play, or skip a track, without taking my phone out. These days, that’s a pretty big deal I’d say too.

Using the FreeBuds also means you’ll want to download the Huawei App, AI Life, which works for recent Android phones. The app makes it easy to pair your FreeBuds, shows battery remaining on the earbuds and case, and that’s where you can setup shortcuts and noise cancelling.

Down the road, I’m hopeful that Huawei will roll out more features and shortcuts, since I’ve already seen a few fixes and other improvements with updates.

Overall, I’m a big fan of the FreeBuds 3. For $259, they are great quality, easy to use, and last well. I could wear them comfortably for hours, unlike most Android earbuds. They also make a lot of sense for anyone with a Huawei phone already, since they work the best with these phones.

For anyone thinking about buying FreeBuds 3, from May 1 to June 17, 2020, Huawei is including 6 months of free access to Premium Stingray Music when you buy them from most Canadian carriers or stores.

Note: Huawei provided the FreeBuds 3 to me for this review. Like all of my reviews, this had no impact on my opinion.