The second season of The Magicians focuses heavily on the world of Fillory, and how our heroes are adapting to running a kingdom while battling evil gods and monsters. The series has seen twists and turns that may even surprise fans of the books, and that’s because showrunner Sera Gamble and co-creator John McNamara have worked hard to adapt Lev Grossman’s novels in a way that expands the world, the relationships, and the characters.

Gamble recently discussed the second season with me, and we talked about how they have adapted the novels, some of their goals this season, and in particular, what impacted Julia’s storyline this season.

The Magicians airs on Showcase Thursdays at 10:00 PM (ET/PT), and catch the season 2 finale on Thursday, April 20. 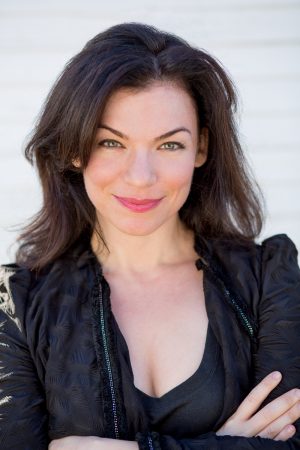 Andrew Powell: When you started going through to adapt this material, and finding a way for it to work for television, did you know early on you were going to adjust it as much as you have or did that just happen as you developed it?

Sera Gamble: “We were aware that we were going to have to adjust the way we told the story pretty substantially to adapt it for TV, the exact details of that we kind of discovered as we went along.”

“Certain things we knew from the beginning. We knew we were headed for Fillory but we weren’t going to get there right away, for example, and we knew from the beginning that we were going to be telling some stories from the second book in season one. We adjusted so that we were telling Julia’s story simultaneously with Quentin, things like that. There were a lot of surprises along the way.”

Powell: I mean, I really love the way it actually reinvents the story, even for those who read ahead, because I watched the first season and then I was so in love with it I had to read all the books. And now it still seems fresh to me. Have you had feedback like that, that other people are reinvested in something even that they’ve read and finding new things about it?

Gamble: “Yeah, I mean we, of course we get responses from all over the spectrum, but I’m very gratified when people say they picked up the books because they were watching the TV show, just because I’m such a fan of the books.”

“It’s fun for me, it’s fun for the whole writing staff as lovers of Lev Grossman’s work to kind of craft the show so that there are these intensely recognizable moments for fans of the book, and also moments that we’ve written specifically to make those fans wonder, ‘Wait, are they going to do it the way they did in the books? Is this that moment, or are they doing something else?'”

Powell: I don’t want to spoil anything, but are you going to have any plot points that are wildly different?

Gamble: “Yes, I mean, it’s sort of like, I mean I think of it as like we found little doors in between plot points. So there’s just so much more room for invention. We have hours and hours of time to tell these stories, and we’re going so much more deeply into some of the characters who were more minor in the book. So yeah, there’s a ton of invention.

Powell: For someone who’s read a lot of books and seen a lot of adaptations of things it’s gratifying to see you guys running with this in a way that feels wholly original while still somehow keeping that core strength of the books.

Powell: Well, I honestly try not to gush during interviews but I was in love with the first season, and the second season is pulling me in again, and I guess it’s one of those things where I wonder how much you talk to the actors about what your planning and how it’s going to develop for them?

Gamble: “Our general philosophy is that we are creative collaborators, and we don’t try to keep them purposefully in the dark. We explain the general gist of where we’re going to actors, and if something particularly crazy is coming up we might have a creative conversation early just so that they can start to work towards that unexpected twist, but there also times when we want things to be a little bit of a surprise.”

“It’s a funny thing, when you’re writing a TV show you kind of feel like you’re… I’m trying to think what a good metaphor is for it. It’s basically like you’re a storyteller and you’re telling the story to everyone starting with the people who are making the show–the designers, the director, the actors–and in a certain way you have to stay cognizant of the way that you’re telling the story to them as well. It’s a sort of like a rolling effect, like a domino effect of interpretation that starts inside the writer’s brain and ends up on the TV screen with people watching it.”

Gamble: “Yeah, season one was a season where our main characters really, they discover that magic was real and they, starting with Quentin, stepped into the possibility of what their life could be.”

“Season two is really about facing the realities of adult life, and that’s the good the bad and the ugly, and it’s enhanced and exacerbated by the presence of magic and the fact that they are, in many cases, kings and queens of a fantasy world.”

Powell: The one storyline too, that’s standing out for me, is the way that you’ve taken Julia in a bit of a different direction this season. Was there something that started that progression? Was it really the basis for the first season, or where did that new plot development come from?

Gamble: “We knew that, in season one, we would get to this place in the book where she is attacked by Reynard the Fox, and it’s a really interesting compelling thing about The Magicians novels that the way that Lev approaches fantasy, he is looking at the sort of psychological archetypes and the human archetypes underpinning these fantastical notions. In many cases he’s using something like a monster, like The Beast, to tell a really dark and real human story about child abuse.”

“In Julia’s case he’s exploring the reality underneath the kind of Greek mythology that we make grade schoolers read, where gods are running rampant and just kidnapping girls off the street basically to have their way with them. I was extremely interested in telling this kind of story on the show because it’s really not an uncommon dark aspect of being a human being. Women, and also men, are attacked everyday, and people walk around feeling the aftereffects of trauma everyday, so we were very excited and were eager to respectfully approach this subject matter, and to make it key and crucial to Julia’s storyline in season two.”

Powell: It’s very powerful. I also wanted to know if there’s something you can tease us for where you want to take things, either deeper in the season or future seasons?

Gamble: “Well, as you get further into the season I can say, because we’re in post-production now, and I’m getting to see some of the things that we promised we would build in a computer basically, things like the dragon from the book, the creatures this season are so exciting, you know? I mean getting to go to work and invent monsters is, I mean I keep waiting for someone to walk in and bust me and tell me this is not a real job, you know? There’s just endless material.”

“When you’re telling a story that’s rooted in something as ancient as fairy tales, the sky is really the limit. We could go on and tell stories like this for years to come, and there’s so much untapped material still in the books. So I guess what I’m saying is that it’s only going to get crazier.”

Powell: That’s awesome. So is there an idea to how many season you could do right now? Because of the way you’re drawing on material, it could go for quite a while. Obviously you would like to do more than, like, three or four seasons?

Gamble: “I mean, on the one hand I’m a little superstitious so I don’t want to jinx it by speaking too confidently about going on forever, but I will say I worked on Supernatural for many years, and for the first several years we really did expect to be canceled every year. We were always a little tiny bubble show and now that show is going into its thirteenth season, so I was fortunate to be in a position to learn a tremendous amount about what makes the show durable and what makes the show capable of sustaining over many seasons, and that, in my opinion it has to do with the characters and their relationships to one another, and then also to the way that you build the world. If there’s a lot of depth and breadth to the world that you’re creating and living in and sort of running around in then yes, those stories can go on for a long time to come.”

Powell: Well, thank you very much, it’s really a pleasure, I’m a huge fan. Thank you for bringing me to the books as well.

Gamble: “Thank you. I appreciate it.”

Extra: Watch the season one interview with Stella Maeve.