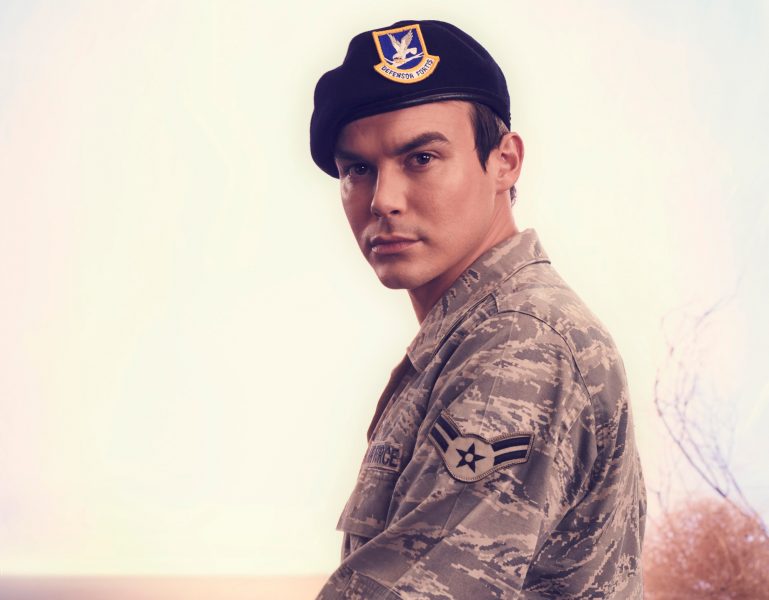 Roswell, New Mexico is a busy, complicated little town, and it has some serious problems with aliens. Among all the conflicted, tumultuous storylines though, between aliens and humans, one of the most intense relationships is between Alex Manes, played by Tyler Blackburn, and Michael Guerin (Michael Vlamis).

Alex and Michael’s story started out in high school, although it’s not exactly clear what happened back then, but it’s obvious that things have been steamy between the two guys before. When Alex returns from military service in Iraq, where he was injured, he’s pushed back towards Michael once again, but now things may be even more complicated.

On the one side, Alex has his father Jesse (Trevor St. John), and his job. Making it worse, Jesse is not only a “homophobic, abusive” father, he’s also searching for aliens in Roswell.

Then, there’s Michael, an alien who has been hiding in plain sight, who pushes all of Alex’s buttons at once.

Recently, I chatted with Tyler Blackburn about playing Alex, how he sees the character, and just how he and Michael fit together. Read the full interview below and then watch Roswell, New Mexico Tuesdays at 9:00 PM (ET) on Showcase in Canada.

Andrew Powell: I’d love to start by talking about how you see Alex. It seems like there could be some really bad stuff coming down the line for him, but to start with, how did you imagine him from the inside out?

Tyler Blackburn: Well, I think what was so appealing was that he really has so much going on inside. I think that he grapples with self-acceptance and breaking through that barrier of living up to other people’s expectations. So I think that he–almost to the contrary, honestly–becomes stronger throughout the season.

Yes, there’s a lot that goes on, and some of it is not great, but he spends this season really coming into his own, and becoming stronger and more fortified. I thought that was going to be cool to play.

Powell: Did you have any notes when you were starting to play him from the producers or anyone who was trying to give you a hint as to how to play him? Or was it really just all in your field?

Blackburn: You know, it was the kind of thing where, I mean, I’m sure you know, you shoot a pilot and you really only have that script. So I knew that he was very broken inside, and outside actually. So I really just, I played that initially, and then as the scripts were coming out, there were definitely conversations of where his direction was headed. And it definitely helped me to find a good pace for when and how to let the true Alex out.

Powell: Is there a big episode this season that you would say has a lot for Alex? Obviously you can’t say much about it, but is there one that we can keep an eye out for, that’s going to be maybe a turning point?

Blackburn: Absolutely, absolutely. There’s actually a few that really stand out to me. I don’t remember which episode numbers they are, but there are a few for different reasons.

And then there’s a scene in present day, that is, it revolves around a very old demon. I’m not sure exactly how much I can say, but it’s involving his father. And it’s a huge turning point for Alex because it’s when he starts to really just sit in his power more in regards to the oppression he faces with his dad. And sort of how that influences his day-to-day identity. So that’s a huge episode, I would say, for Alex, absolutely.

Blackburn: Oh man. Well, you know, I think it’s interesting because it is sort of this cat and mouse game between them, for the entire season. But you do get to see moments of clarity for one of them at a time it seems like. It is a little bit frustrating, looking at it from the outside, where it’s like, they’re just never quite on the same page. But they really belong together, you know? And I think they’re both navigating their lives independently of each other. Because of that, they go in different directions at times, but then they find their way back together.

So, yeah, it’s complicated for sure. And it doesn’t really let up this season, but it’s part of the drama. The higher the drama, the better the reward.

Powell: I totally hear you. Do you think that Alex makes Michael better? Because, to some degree, the stuff we’ve seen early on in the show so far, Michael doesn’t always come across as that great a guy. But there’s that glimmer, when he’s with Alex, that maybe he can be a nice guy, or a good guy at least.

Blackburn: Right. I completely agree with that. I think that again, there’s an episode of flashbacks, and you see who everybody was in high school really. But Alex was very different and so was Michael.

You know, Michael sort of put on this tough front. Some of it’s based in reality, and I think some of it is a persona that he’s putting on. But I think what happens is when they’re in an environment where they can be intimate in some way–I’m not even just talking sexually, I’m talking about just energetically–and they can kind of remind each other of who they were in high school, which is really who they truly are, without these masks that they put on as they turn into adults.

I feel like in high school, it’s like, people are trying to figure out who they are, and then you make a decision, and then in your 20s, you live that decision. It might not even be who you are, so I feel like it gives each of them a reminder of who they are.

So, yes, I think that Michael becomes softer, more vulnerable, and a little bit more real. But I think then what happens is, Alex is kind of playing him a little bit because he’s undecided on who he is and what he wants. So it puts Michael in this position where he’s putting himself out there a little bit, and then I kind of shut him down. And then he has his guard back up.

Again, it’s a complicated relationship, but ultimately, they can be themselves together. And I think they’re trying to get back to that point, but that takes courage. And I think they’re both grappling with a lot of inner demons that keeps them, I don’t know, hardened.

Powell: Is there a favorite part for you, of being in this show? Something that you like the most out of all the elements of the story, or actually acting in it?

Blackburn: You know honestly, there’s so much. That was one of the appealing things to me, even about the pilot script. To me, even though it’s a show about extraterrestrial beings, it’s very human and it just feels very nuanced to me. So the writing is, somehow able to fit so much into one episode. And then with the entire season, you just really find, to me it’s funny how human it feels, even though it’s about aliens. You know what I mean?

And in a way, that’s sort of beautiful because it’s like; put all of the labels aside. Everyone’s dealing with the same shit, you know?

Powell: That’s awesome. I totally agree. I love the fact that the show has actually a very strong social commentary that most of these shows, for this type of topic, don’t normally touch.

Blackburn: That’s one of the things that I loved about the pilot. You’re completely correct in that–I think that serves the show in so many ways, because I think people were cautious about a reboot, but in doing what Carina [Adly Mackenzie] and the writers have done by bringing it very socially relevant storylines, it makes it its own story, outside of the original, even outside of the books.

So I think that you’re right on that, and I think that was what always appealed to me. I feel like it rides this line between escapism, when you watch it, and also reminding you that there are very important topics going on in the world that needs to be discussed and addressed and I feel like it has a really good balance.

Powell: Well, I also wondered if you watched the original show? Do you remember it? Did you watch any of it before you filmed at all?

And then I chose not to watch it again for this, for multiple reasons. But it was an active choice. I don’t want to influence how we read these scripts. And also, Alex was a completely different character in the original, so it wouldn’t have served me to do that, I don’t think.

But it was really fun though. We had Shiri Appleby direct an episode, and she was just really, I don’t know, she was just gracious, and she really passed the baton during that episode. I could tell that she felt excited and a sense of pride. So, it all came full circle.

Powell: That’s great. Well thank you very much for the time. It’s a pleasure chatting.

Blackburn: Likewise, thank you so much.