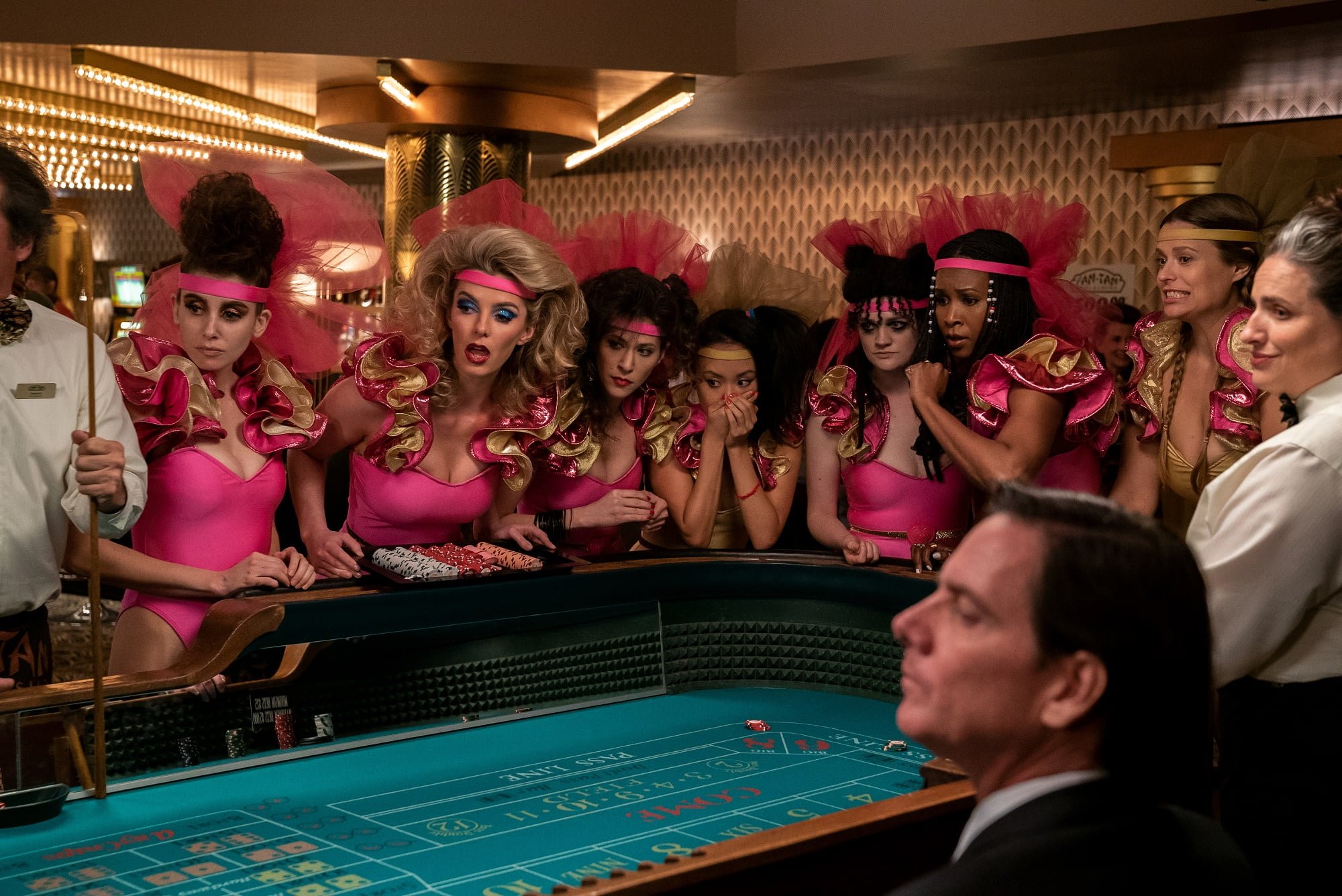 The third season of one of Netflix’s best original series, GLOW, might strike some of the show’s closest fans and supporters as an unusual change in direction. There’s very little wrestling and silliness for the girls of the Gorgeous Ladies of Wrestling this season, but it’s hardly missed, replaced instead with a lot of character development and intriguingly diverging storylines for all of the core players. Even more than GLOW’s previous seasons, this third season uses a shift in location to explore these characters and their relationships with a magnifying glass. No longer is GLOW a show about people struggling and coming together to put on a somewhat disreputable wrestling show. Now it’s more like watching characters who are growing impatient with one another stuck in the same place with little means of physical or emotional escape. It might not be as tightly constructed as the show’s previous installments, but the third season of GLOW reaffirms the series’ status as one of the finest things the streaming service ever put out.

After losing their television deal at the end of last season, producer and money man Bash Howard (Chris Lowell), former indie movie darling director Sam Sylvia (Marc Maron), and performer-slash-co-producer-slash-divorced mother Debbie Eagan (Betty Gilpin) have taken an offer of a residency at a B-level Las Vegas casino, run by a former showgirl turned entrepreneur (Geena Davis). It’s a lucrative arrangement that keeps the Gorgeous Ladies of Wrestling afloat, but it also doesn’t require a Sam and Bash to do a lot of work, since the stage version of the show is pretty much the same exact matches, outcomes, and stories night after night. Sam almost literally has nothing to do, and his unlikely protegee and romantic crush, Ruth Wilder (Alison Brie, who also gets a chance to helm one of the best episodes of the season behind the camera), basically ghost directs everything. Bash still does some announcing for the shows, but mostly defers to Debbie to do all of the heavy lifting, preferring to spend most of his time in the hot tub, ignoring his new wife, Rhonda (Kate Nash) and plotting his next business ventures. Bash’s inattentiveness has led Debbie to a breaking point that finally snaps when the owner of the Fan-Tan Casino and Resort asks the ladies to extend their contracts through to the end of the year. Already regretting spending so much time away from her toddler son, Debbie leads an unhealthy lifestyle, but also starts searching for a way out that won’t abandon the show she has worked so hard to help shape.

Like many Netflix shows, the third season of GLOW takes a few episodes off the top to put all of the characters’ new storylines into motion, and there’s plenty of room for such growth when one considers that the current plot arc is built around everyone working on a product that’s meant to be repetitive and unfulfilling to everyone who isn’t in the casino audience. Unlike the previous season which brilliantly and note perfectly built its narrative backbone around resolving any long standing conflicts between Ruth, her arch rival Debbie, and the perpetually apoplectic and pissy Sam, GLOW season three gives all of the side performers who were shifted to the background of the previous installment a lot more room to grow and explore. The glitz and sleaze of 1980s Las Vegas isn’t shied away from by series creators Liz Flahive and Carly Mensch, but they’re much keener on portraying Sin City as a place that’s thoroughly banal and boring for the people who live and work there. Once the girls have seen all the city has to offer them, they either succumb to the allure of it all (like the increasingly boastful and dickish Bash and Sydelle Noel’s stuntwoman turned trainer and performer, Cherry, whose character is taken through a roller coaster of emotions this season) or they’re left to focus on the shortcomings and emptiness of their lives away from their Los Angeles homes. Ruth buries her nose in the work at hand and being a better friend to Debbie than she has been in years, while Sam just straight up does everything he can to avoid being in Vegas longer than he needs to, so it’s up to the supporting characters who sometimes didn’t get a chance to shine and show their range to take GLOW to another dramatic and comedic level. 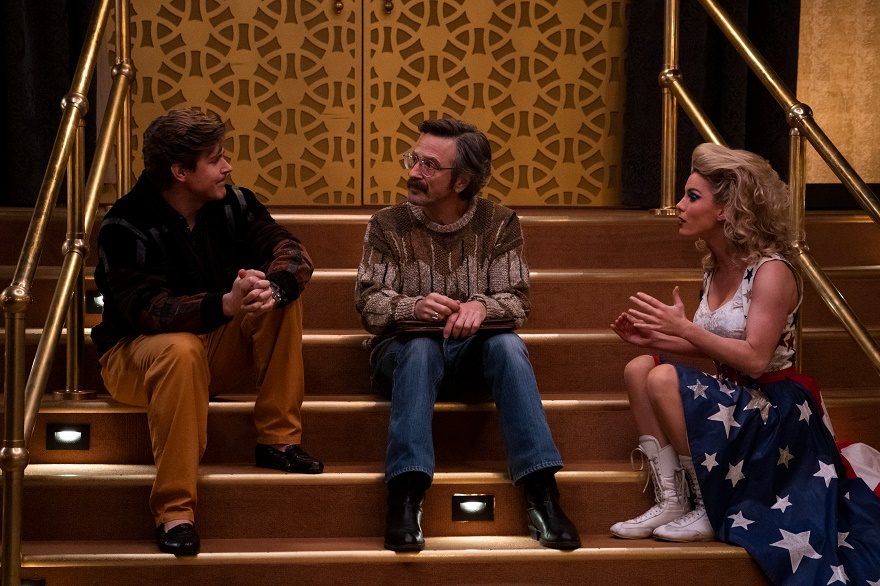 Wise and talented Carmen (Britney Young) begins to wonder whether or not it’s time to move on from her role as GLOW’s resident den mother and start a career as an actual professional wrestler. Aging Tamme (Kia Stevens) knows that her body can’t keep up with the rigorous pace of the show much longer, but she’s not willing to give up her best and possibly last opportunity to be a working actor. The budding romantic relationship between the open and confident Yolanda (Shakira Barrera) and the shy, nerdy Arthie (Sunita Mani) is jeopardized due to some sexual hangups and personality clashes. Boastful Melanie (Jackie Tohn) is confused as to why performer and costume designer Jenny (Ellen Wong) seems to hate her guts all of a sudden. Sheila (Gayle Rankin) is looking for ways to take her in-ring character to the next level, and turns to Tamme and Ruth for help.

All of these storylines are given more time than they might’ve been granted in previous seasons, but instead of feeling like a show that has become overstuffed with an abundance of characters, GLOW emerges a lot richer for allowing these detours to flourish and thrive. There are a lot of stories happening throughout the third season of the show, but none of them feel inorganic and all of them work thanks to the consistently strong writing and performances. Although last season had a more rigid focus, GLOW season three makes the best use yet of its abundantly rich cast. There isn’t a bad character to be found in GLOW, and this season shows that it’s hard at times to tell who gives the best performance, with all of them capable of navigating the show’s shifts between comedy and drama better than any ensemble currently on television. It’s hard to single anyone out because all of the cast members bring something different and nuanced to the table worth talking about, but if pressed, I would say that Rankin, Nash, Lowell, and new additions Davis and Kevin Cahoon, who plays a drag queen who befriends some of the cast, are the biggest standouts this time around.

The pivot point of GLOW season three is an episode that’s likely to be referred to in the future as “the Freaky Friday episode,” an entry in the series that’s both playful in the same way that season two’s parody episode was and smartly written enough to be a catalyst for all the drama and fallout that will follow in its wake. From that point on, GLOW builds dramatic momentum, offering plenty of new character directions and emotional gut punches along the way.

The downside to this is that GLOW season three can’t quite stick the landing on all its stories. Some are wrapped up in perfunctory, somewhat unsatisfying fashion. Some are dropped entirely or seemingly paused until the next season without much explanation, and the cliffhanger ending leaves things in a place where one wonders what the next steps will be for everyone involved without necessarily justifying how it got to that point. Things speed up, and while the final two episodes of GLOW season three are still as great as they ever were, there are some obvious, cliched moments, and both installments could stand to be about thirty minutes longer than they actually are. Maybe two extra episodes from the standard ten would’ve helped matters, but that doesn’t mean I’m any less excited and invested to see where one of Netflix’s most consistently exceptional (and perpetually undervalued) shows goes next.

Season three of GLOW is available to stream on Netflix starting on Friday, August 9, 2019.

Check out the trailer for GLOW season 3: