The Haunting of Bly Manor | Review 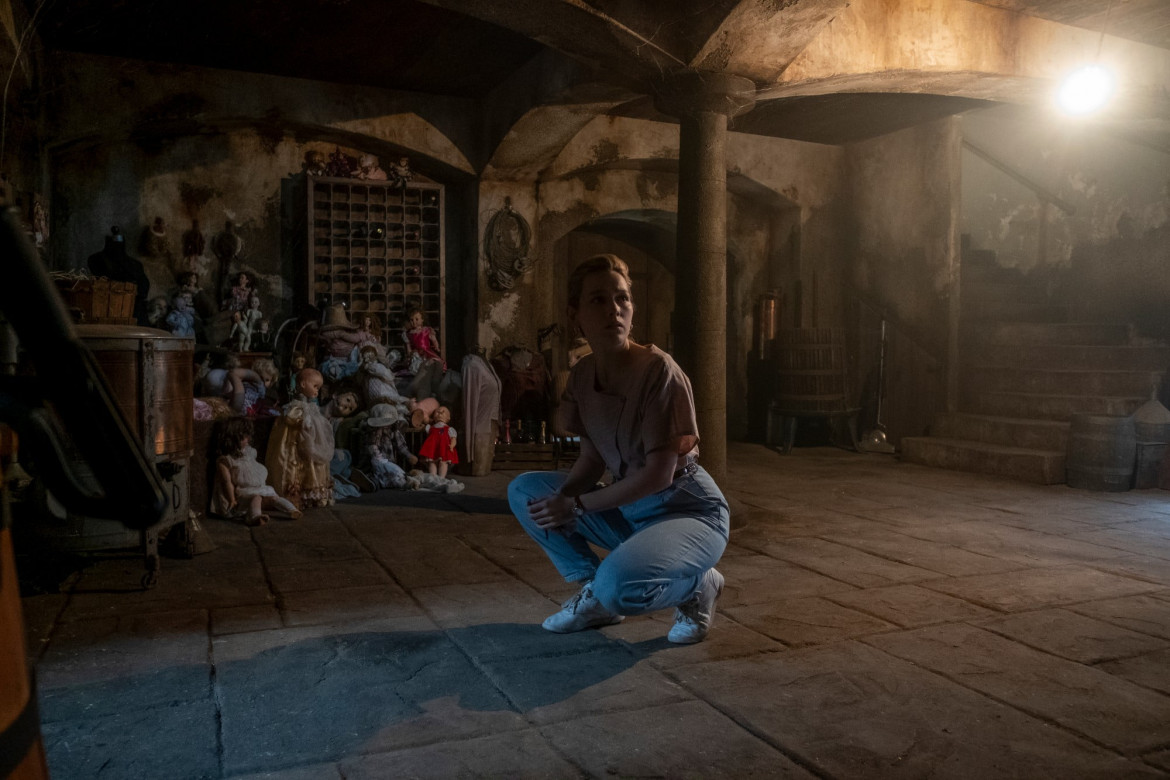 The bulk of The Haunting of Bly Manor is set in 1987. Dani Clayton (Victoria Pedretti) is an American schoolteacher living in London and desperately searching for work. She responds to an ad in a local paper that has gone unanswered for months on end. The job is being offered by Mr. Henry Wingrave (Henry Thomas), a wealthy lawyer who’s looking to secure an au pair for his 8-year old niece, Flora (Amelie Bea Smith), and 10-year old nephew, Miles (Benjamin Evan Ainsworth), at the family estate in Wessex. Flora and Miles’ parents died two years prior in a tragic accident, and to add further insult to their injury, their previous caregiver (Tahirah Sharif) passed away under mysterious circumstances. Henry refuses to give up his job and lifestyle in London, which means the position would be a live-in one. Mr. Wingrave is skeptical as to why an educated American would want to take such a job, but he offers her the position, thinking Dani’s experience as a teacher could benefit Flora and Miles. When Dani arrives at Bly Manor, something about Flora and Miles’ demeanour seems off. Their attitudes bounce back and forth between those of normal, happy children and sometimes harsh, hostile, uncaring, and remarkably well spoken weirdos. Are these mood swings simply manifestations of grief or could it be tied to secrets hidden within the Bly Manor grounds?

The Haunting of Bly Manor gets its inspiration from the collective works of Henry James, most specifically his often adapted, serialized novella The Turn of the Screw (which was already notably adapted once this year, but you’d be forgiven for not remembering that). James’ classic tale barely has enough meat on its bones to be adapted into a single volume, which means Flanagan and his assembled team of highly capable writers and directors will have to do some significant bulking up of the material to get the series to a nine episode run. In the case of The Haunting of Bly Manor, a lot of the new additions and the shift in time periods from the late 1800s to the late 1980s work rather well, but this approach also underlines one of the biggest faults to be found in Flanagan’s previous series.

Flanagan and his team like to tell stories rooted in character first and plotting second, which means that The Haunting of Bly Manor is the sort of show that has no bad parts, with every performer getting ample chance to shine. The show wants to foster an eerie, uneasy atmosphere (striking a subtle balance in production design between gothic architecture and nuanced 80s period detail), but like most great horror craftspeople, those behind the scenes want to ensure that viewers care about what’s happening to the characters.

Just like The Haunting of Hill House, pretty much every major player in the story will get an episode focused exclusively on them and told from their unique perspectives, packed to bursting with as much backstory as the narrative can handle. While such an approach surely appeals to anyone who has a deep appreciation for the nuanced and detailed art of storytelling, it also makes The Haunting of Bly Manor (and Hill House) a difficult show to binge watch. If each episode feels like its own movie, watching more than a couple of entries at a time starts to feel exhausting and overwhelming. It doesn’t mean that The Haunting of Bly Manor isn’t lovingly or competently crafted at every technical level. It just means that this is a whole lotta show to take in.

The cast does its part to keep viewer investment at a high level throughout, even when the energy flags. Flanagan and company have taken the American Horror Story approach with The Haunting of Bly Manor, with many Hill House cast members returning in completely different roles. (And don’t worry if you want to dive right in with this one. Watching Hill House is not a prerequisite to anything that happens in Bly Manor.) For her part as the lead, Pedretti gives a commanding, wholly likable, and deeply sympathetic performance, providing a strong emotional core for this strange universe to revolve around. Oliver Jackson-Cohen gets his chance to sink his teeth into a morally ambiguous and creepy turn as one of Mr. Wingrave’s closest advisors. And Thomas delivers some of his career best work (and a surprisingly credible British accent) as the shaken, perpetually boozing, and hopelessly distant employer. 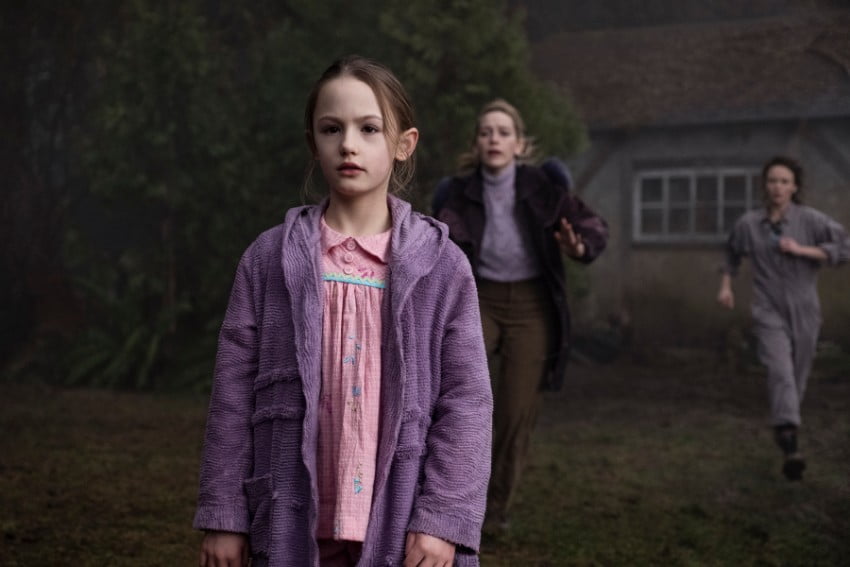 The new additions to the cast arguably put in even more heavy lifting than some of the more familiar faces. As the creepy children, Ainsworth and Smith are tremendous, making the viewer constantly wonder about Flora and Miles’ true motives. They are some of the most delicate and captivating performances from young people in a horror story ever captured. T’Nia Miller adds a degree of refinement and intelligence as the Bly Manor housekeeper who’s seen it all, while Rahul Kohli charms and gently pulls at the heartstrings as the pun-loving cook. But next to the kids, the biggest find here is Amelia Eve, who plays the Bly Manor groundskeeper. With a perfect blend of cynicism and empathy, Eve leaves a major impression, especially when she lovingly performs what might be the series’ longest and most impassioned soliloquy. Eve’s is a star making performance in every sense of the term.

Viewers hoping for the same sort of emotionally gutting revelations that were found in The Haunting of Hill House might be let down by this side-quel. There’s no moment in The Haunting of Bly Manor that comes close to its predecessor’s reveal of The Bent Neck Lady, which remains one of the saddest and most traumatizing moments in series television history. But even with the bar set almost impossibly high, The Haunting of Bly Manor does have two episodes that will lodge in the brain long after the series has run its course.

Both of the best episodes in The Haunting of Bly Manor come courtesy of director Liam Gavin. The fifth episode – The Altar of the Dead, written by Angela LaManna – is a twisty, disorienting, boundlessly creative, and wholly captivating bit of psychological terror that would be right at home in Twin Peaks. Even better than that is the preceding fourth episode, The Way It Came, brilliantly written by Laurie Penny, which sets up the series’ inevitable pivot into gothic romance territory. The Way It Came is a work of palpable love, sorrow, and thoughtfulness, opening with one of the best 80s pop song needle drops of all time (for a track that could serve as an unlikely theme for the entire series). It’s an episode of television so powerful on its own that I haven’t stopped thinking about it for over a week now.

But after the fifth episode, narrative troubles start rearing their head, and The Haunting of Bly Manor starts crumbling quicker than the titular estate. Instead of ramping up the scares and emotions to reach a satisfying conclusion, The Haunting of Bly Manor offers up three ungodly dull, exposition laden episodes in a row, stopping any sense of momentum dead in its tracks, all tied to the multiple love stories that the show has set up along the way. The second to last episode of the show – which I have been asked by Netflix and the producers not to divulge any details about – is a snail’s paced snoozefest that could’ve worked better earlier in the series and not as a big reveal. The Haunting of Bly Manor decides all too late in the game to back up a dump truck full of unnecessary mythology onto a story that was doing well enough on its own without it. The final episode goes to exceptional lengths and rights the ship somewhat by sending things out on a satisfying, swoon-worthy note, but the second half of The Haunting of Bly Manor might turn more viewers off than it invites.

On one hand, it’s easy to see why Flanagan has made this artistic and narrative choice. In interviews, Flanagan has been quick to point out that he sees The Haunting of Bly Manor as a love story and not a ghost story, and the main love story that the show revolves around still works wonders (and is even somewhat revolutionary). The show ultimately achieves its goals, but the miscalculation comes in the showrunner’s need to explain love, an emotion that doesn’t really need a lot of plot to be conveyed. The fourth episode accomplishes this idea brilliantly, but the rest of the series (with the final installment excluded) ends up outsmarting itself. It’s a gutsy move to mount a climactic flourish of dense plotting that runs the risk of alienating those who came to The Haunting of Bly Manor expecting scares, but it’s a choice that almost backfires spectacularly. It’s a work of love, but one that should simply let that emotion live, breathe, evolve, and exist organically. Slightly more than fifty percent of the episodes get that. Others, not so much.

The Haunting of Bly Manor is available to stream on Netflix starting Friday, October 9, 2020.