Writer-director Scott Frank’s latest limited series, The Queen’s Gambit, is an intelligent, anxious, detail oriented character study that’s a perfect reflection of the game at its centre. Although it’s not a visually stunning game (or sport, if one chooses to call it that), chess holds plenty of human drama and its own unique, ever changing story structure. It’s a game that starts off slowly and predictably, with players feeling each other out before fully committing to a strategy. It starts out reasoned, methodical, and careful. Then, something will happen, momentum starts to swing, and the whole game feels like it could fall apart at any time. It’s a game built upon capitalizing on the errors of others, but one that often ends up in a draw for some of the world’s best and brightest players. It’s a game of sacrifice and, eventually, submission. One can emphatically pursue victory or simply play to not lose.

Although The Queen’s Gambit revolves around the world of chess players and prodigies, Frank (who previously worked with Netflix on the western series Godless) has found a way to cleverly create a stunningly delivered bit of drama that elevates both the game and the people caught up within it. It doesn’t quite stick the landing at the end, but The Queen’s Gambit remains one of the most compulsively watchable and narratively and emotionally complex series of the year.

Kentucky native Elizabeth Harmon (Anya Taylor-Joy) was raised in a Christian orphanage from the age of nine, following the death of her mother in an auto accident in the late 1950s. Traumatized, socially maladjusted, and pumped full of tranquilizers (prescribed by orphanage staff to help with the “disposition” of their wards), Beth struggles to connect with those around her. Beth finds a mental outlet when she starts spending time with the orphanage’s janitor, Mr. Shaibel (Bill Camp), who plays chess alone in the boiler room. Mr. Shaibel reluctantly agrees to teach Beth the game, and she quickly proves to be a bit of a prodigy. Beth is willing to learn everything she can about the game and can see various offenses and defenses in advance of her opponents. Unfortunately, Beth’s opportunities to learn from or play against anyone other than the janitor are stymied at every turn for a variety of reasons. No one plays chess at the orphanage. Beth is constantly being told that she should start looking into more lady-like pursuits, or at least something that could make money in the future. Beth also believes from a young age that she can only perform to the best of her abilities if she’s under the influence.

The first episode of The Queen’s Gambit gets most of the story’s more cliched young adult tropes out of the way early, and revolves almost exclusively around Beth’s struggles to adapt to life in the orphanage, with the character played Isla Johnston, in a performance wise beyond the young actor’s years. This is akin to the pretty standard, heavily documented opening moves of a chess match. Many games of chess start out the same way. There’s a set-up from which every action and turn will follow, morphing into something different with each stop of the clock. It’s set up early on that Beth will have to deal with abandonment and substance abuse issues throughout her adult life, but much like the character’s chosen obsession, The Queen’s Gambit is much more interested in where things go after the opening moves.

Joy steps in to portray Beth from her teens to early twenties, delivering what might amount to a monumental, career defining performance, likely because the actress has been given plenty to work with. As a teen, Beth is adopted by Alma Wheatley, played by esteemed filmmaker Marielle Heller (Can You Ever Forgive Me?, A Beautiful Day in the Neighborhood) in an equally impressionable and noteworthy performance. Alma, a former pianist, is married to an uncaring, perpetually absent husband (Patrick Kennedy) and is numbing the pain of a lost biological child through substance abuse issues of her own.

When things start to get tough, Beth takes her pursuit of chess more seriously; seeing it as a way out of a life full of dead end situations. Although skeptical at first, Alma starts to see Beth’s potential. They hit the road together, playing in and often winning tournaments around the country. Soon, they’re making money, and despite the sexism at the heart of the male dominated world of chess, Beth is being touted as America’s best chance to topple the stoic Russian world champion (Marcin Dorocinski). Anyone unfortunate enough to play Beth in a tournament can see her seemingly unbeatable talent, but unresolved traumas, addictions, and a single minded determination to win at all costs could be the young upstart’s undoing.

Oscar nominee Frank, who provided screenplays for the likes of Out of Sight and Logan and directed underrated gems The Lookout and A Walk Among the Tombstones, has a clear understanding of how films about child prodigies struggling with success are supposed to work. Sometimes he’ll willingly give in to viewer expectations, and other times he’ll try to go as far in the opposite direction as possible. This adaptation of Walter Tevis’ 1983 novel starts off hewing closer to some of the author’s better known works, namely The Hustler and its sequel The Color of Money. The early episodes of The Queen’s Gambit outline Beth’s rise from a well honed hustler trying to make some extra cash to becoming a respected professional who turns out to be their own worst enemy. 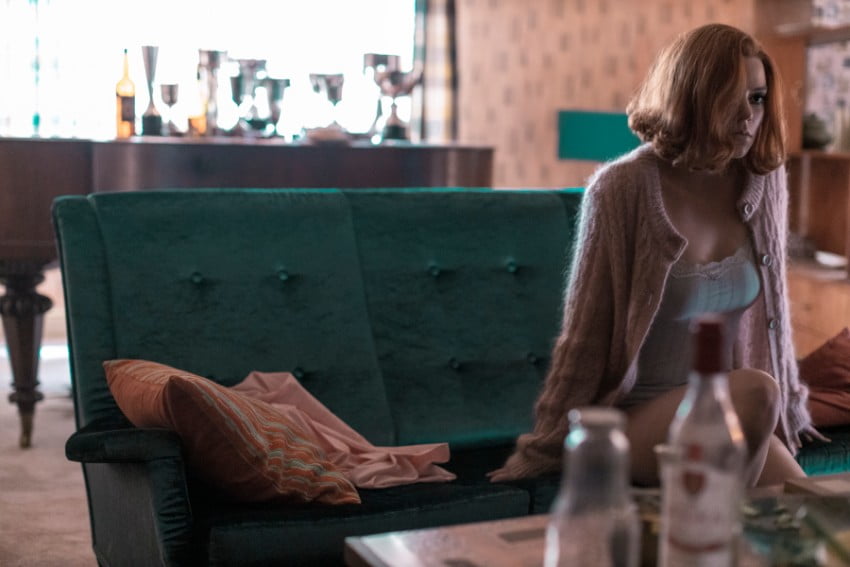 Joy portrays Beth as someone who’s determined, booksmart, and seasoned, but sorely lacking in self-control, intuition, or the capacity for reflection. There’s a self-imposed hardness and the inability to pick up on social cues that most prodigies and orphans struggle with, but Joy also finds subtle ways of showing empathy and compassion to those around her. While Beth has the potential to lash out in anger or pettiness while under the influence of drugs and alcohol, Frank and Joy find just as many moments to show the character at her most grateful and humble. When Beth is at her best, she’s a hero worth rooting for, and at her drunken, pill popping worst, there are still glimpses of the good inside of her. It’s a hard balancing act to pull off, but Joy understands the shifting gravity of the character’s situation perfectly. The Queen’s Gambit is built around a character with equal capacity to do great things and to be wholly contemptible, but never without losing viewer empathy for her. It’s an electrifying performance in an already riveting series; one that matches the slow building intensity that Frank desires to set his rise, fall, and rise again narrative apart from similarly themed narratives.

Joy’s performance dominates The Queen’s Gambit – as well it should – but she has exceptional scene partners throughout, especially when opposite Heller’s equally motherly and enabling guardian. The scenes they share together tackle 1960s sexism head on, with Heller’s performance exemplifying the type of wounded woman Beth could easily become if she doesn’t remain mentally and emotionally strong. On the other side of that coin is Jolene, played by Moses Ingram, in what’s surprisingly only the performer’s third on-screen credit. As the rebellious, outspoken black teenager who shows young Beth how to navigate life at the orphanage, Ingram is tasked with instilling the main character with a reasoned and strong willed guiding ethos. The character of Jolene is just as integral to the narrative as Beth’s surrogate mother, and Ingram provides the protagonist’s arc with a solid bedrock of strength, resiliency, and mistrust.

And while it seems like a lot for one limited series to handle, The Queen’s Gambit gives Beth not one, but three potential love interests that are delicately handled and none of which dominate the core storyline. There’s Townes (Jacob Fortune-Lloyd), a charming and kind chess journalist that Beth quietly pines for from the first moment they meet. Harry Beltik (Harry Melling) is the Kentucky state champion who believes she’s destined for greatness, provided that she can keep refining her game. Benny Watts (Thomas Brodie-Sangster) is the U.S. champion, a man who fashions himself a bit like a know-it-all cowboy and is the only player capable of getting inside Beth’s head. They’re all fascinating characters in their own right, with Sangster and Melling making significant contributions whenever they’re brought back into Beth’s fold across the course of the show. But The Queen’s Gambit is smart enough to know that the main character doesn’t need to be defined by the input, advice, or contributions of a male counterpart. There’s a great delicacy in these relationships that proves just as unpredictable as each of the show’s tension packed chess matches.

Frank also deserves a lot of stylistic credit, and not just for making the game at its centre into something inherently cinematic or captivating to watch, perhaps thanks to the input of chess masters Garry Kasparov and Bruce Pandolfini as creative consultants. The Queen’s Gambit is dripping in lavishly realized period detail and costumes that helps to emphasize class and personality differences between the characters and their worlds. Again, in another parallel to chess, Frank and his creative team’s design choices are rigorous and reasoned, often using natural light to bring out textures in the scenery that feel realistic rather than stagey.

Viewers that stick with The Queen’s Gambit past it’s deliberately slow opening episodes shall be richly rewarded, although reaction to Beth’s heavily telegraphed and inevitable final showdown with her Russian counterpart will likely divide opinion. Closing with a final episode that feels somewhat rushed and all too conveniently plotted, The Queen’s Gambit runs the risk of abandoning everything that made it great in the first place for a relatively standard plot of Cold War intrigue. It makes logical sense, and the narrative stays mostly on track, but there’s too much eagerness on Frank’s part to make certain every one of his threads is tied up a bit too neatly by the end. The final episode feels contrived in ways the rest of the series manages to avoid.

That last episode – which is still highly entertaining on its own terms – doesn’t damage the overall quality of Frank’s work as a whole. The Queen’s Gambit brilliantly uses a game that’s already a metaphor for warfare and turns it into a thoughtful reflection on what it means to be poor, alone, and female in a patriarchal society. Like its main character, The Queen’s Gambit never wavers in its conviction and focus.

The Queen’s Gambit is available to stream on Netflix starting Friday, October 23, 2020.