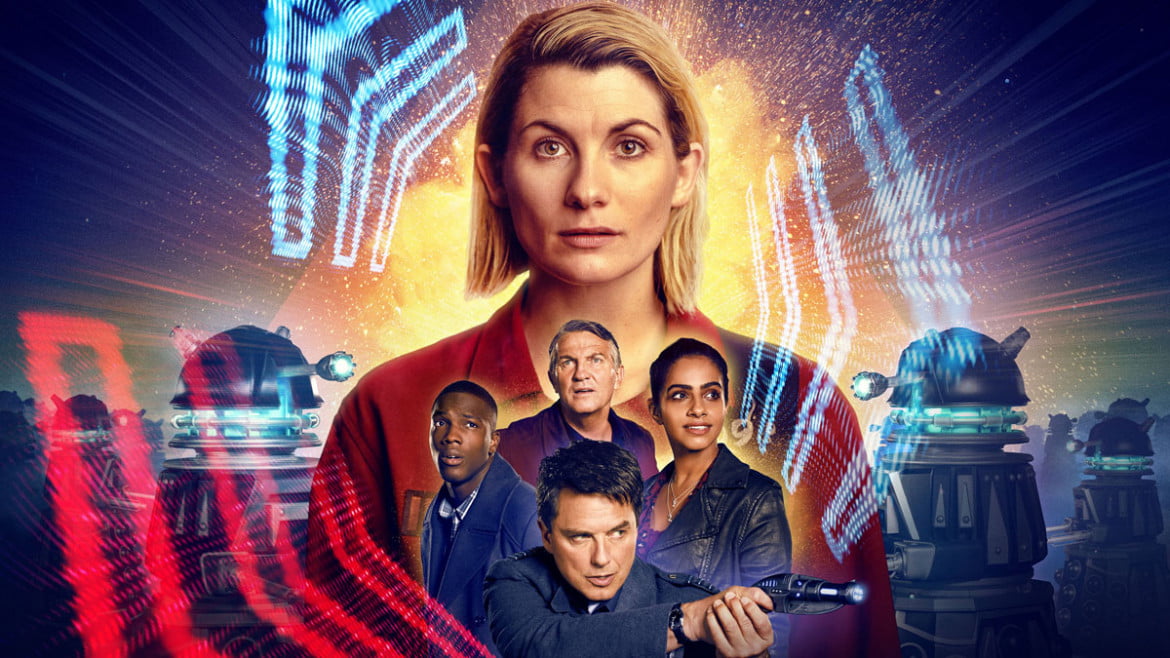 Change is coming for Doctor Who and her companions and it starts tonight with Doctor Who: Revolution of the Daleks, the New Year’s Day special that’s also going to set the stage for the upcoming 13th series later this year.

Doctor Who: Revolution of the Daleks is a sequel to the events in the last festive special featuring the Daleks, according to Executive Producer Chris Chibnall, who spoke during a virtual press event with stars Jodie Whittaker and Mandip Gill.

The three talked about what’s coming next for the characters, two characters you can expect to see again tonight, and something of a spoiler that will have an impact on the 13th series.

“We pick up with the Doctor in prison. She’s been taken by the Judoon at the end of the last series, and we’ll be picking up with her in there,” Chibnall said. “Some time has passed–she has been in prison for a very long time–and she’s struggling there, and then back on Earth, Yaz, and Graham, and Ryan–who were dumped back on Earth at the end of the last series–are struggling to figure out their lives without the Doctor.”

“It’s been 10 months for them, since they’ve seen the Doctor, and at the beginning of this they discover the presence of a Dalek.”

As Jodie Whittaker said though, this special is “not necessarily Doctor-led. That’s what makes it really exciting as well because it’s definitely a team effort throughout.”

“As we saw, Yaz has a really complex and I suppose different connection to the Doctor to the two boys–for loads of personal reasons–so I think it will be safe to say that she is struggling without the Doctor, but is probably trying that bit more than the boys to solve this,” Mandip Gill said.

“She has a connection with the Doctor and with space, so she’s always been in Sheffield, but there’s just something about space, and the Doctor that’s just not being fulfilled yet. You’ll see there’s just a bit more of a sense of urgency with Yaz trying to find the Doctor. The boys are being lazy. [laughs]”

“She’s definitely grown, but I also think me, as a person in this journey has also grown. I was speaking to Chris before about how it’s very reflective of my personal life. I’m getting used to the sci-fi world and the words and stuff, just the way that Yaz is, so it feels like an easy thing to portray.”

Captain Jack (John Barrowman) is also back for the special, and his appearance has been in the works for some time.

“That was cooked up over lots of phone calls and secret meetings, and not-so-secret meetings,” Chibnall said, “back in the days of early 2019. I really wanted Captain Jack to meet the 13th Doctor and it had been a long time since he’s been on-screen in Doctor Who. Well overdue, and with festive specials you want them to feel like a treat and there’s no bigger treat than John Barrowman as Captain Jack.”

Beyond being funny and dynamic, Chibnall said that Captain Jack is also “a really important part of Doctor Who history, I think, and also I knew we’d need a character who might help the family in the Doctor’s absence… he brings a lot of things to the table, really, and he has a great coat as well.”

Joking about whether or not she or the Doctor had ever met Captain Jack or John Barrowman on set, Whittaker joked, “I think, if I was to ever to have met him… he’s incredibly energetic, and passionate–as a person and as Captain Jack–and I think that those are the things that have really bonded us as a fam and a family. And you know, we’re going at things a million miles an hour, and to have a character that can keep up is really exciting and keeps everyone going.”

Teasing the episode, Yaz and Captain Jack share some scenes, and Gill said that they share a connection in Revolution of the Daleks because, “It almost feels like he’s the one person that will understand what it feels like to lose her, so he sort of explains things to her that I feel like are reassuring to her.”

“And he shared his coat, so that was lovely of him. I didn’t really know him that much, but he was like, ‘It’s really cold, get in my coat,’ and I thought, ‘I’m not going to say no to John Barrowman. I just got in there.”

“As the Doctor, I will say that the fam as a four is no more,” and Revolution of the Daleks will be the last time that Bradley Walsh and Tosin Cole are in the series. Whittaker said that, without going into specifics of the scenes, she felt “incredibly bereaved.”

“When you realize it’s the last moment these four characters, or your last moment with that character individually–all those kind of things–when I realized that, I felt incredibly bereaved about what this journey has been because they started with us. That’s so unique. All of our journey has been together as a family, and we clicked like a family, because it feels like… [mimes crying] and then we all laugh.”

“I can tell you that it’s very emotional,” Chibnall said. “I can tell you that we’ve all been in tears watching it. It’s a very important part of the mix of the special where you get lots of thrills, lots of spills, lots of humour, lots of Daleks, and lots of emotion. Without spoiling anything, it’s hard, but we don’t shy away from what it means for this family to have its final moments together, and it was emotional off screen, it’s emotional on screen.”

“And it’s an incredible thing because actually because what you were saying, Jodie, about how you all came together and you all just clicked, and you never know that’s going to happen… I think we all feel very luck that that happened and these four people came together.”

Chris Noth as Jack Robertson is also back in the special, Whittaker confirmed, because he was so excited to come back.

As far as the Daleks, Whittaker also said they’re exactly why this kind of special is so much fun.

“I think what’s really brilliant about it is that it requires no kind of previous knowledge to the Who universe,” Whittaker said. “A TARDIS is a part of everyone’s vocabulary, whether they’ve seen the show or not, and so is a Dalek. You have little kids now knowing, ‘Exterminate!’… it’s just such an iconic thing.”

“As the Doctor, to have scenes where you are dealing with, or at times failing to deal with, such an iconic monster, it feels as if… for us, it really puts our stamp on our time.”

“And also it is interesting how scary they are. It is really interesting because they’re not very fast, but they’re really creepy. And the tone of voice–everything about it–and the brilliance of the art departments and the people that create these things and build them and bring them to set. And you know you’re going to be upstaged. You’re like, ‘I mean I didn’t need an hour in makeup and getting well upstaged by that.'”

Gill joked, “It feels like you go, ‘We’re really set in this universe now. You can’t take us away now because we’ve fought the Daleks now.'”

Expect to see some changes in the look of the Daleks too, as Chibnall confirmed, and there’s a very specific reason for the new look.

And as far as Whittaker sees the episode, she said it “leaves it for this season to be very exciting,” while Gill noted that it gives Yaz a chance to “take charge.”

Filming for series 13 is underway, and there are “really exciting things coming,” according to Chibnall.