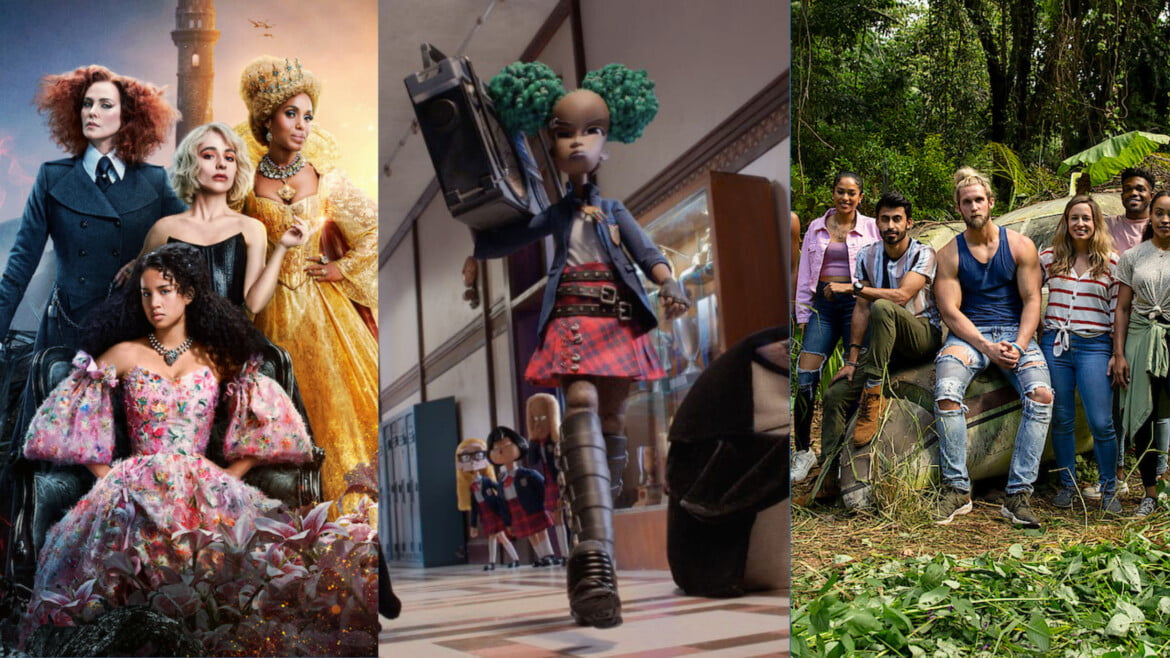 In October, Netflix also launches games on Android and iOS devices. Anyone with a Netflix subscription can play one of the 28 games in the Netflix app, including three new releases: Nailed It! Baking Bash, Spiritfarer, and Hello Kitty Happiness Parade.

Netflix is also launching their Halloween “Streams & Screams” Collection with films, series, and shorts for anyone, from kids and families, to horror fans.

For the full lineup of titles in October 2022, watch the YouTube video.

Filmed at the historic Brooklyn Academy of Music, Hasan Minhaj returns to Netflix with his second stand-up comedy special Hasan Minhaj: The King’s Jester. In this hilarious performance, Hasan shares his thoughts on fertility, fatherhood, and freedom of speech.

Unfinished business and big opportunities stir up tension in the group, but nothing will stop them from living their flashiest and most fabulous lives.

A boy and an aging billionaire bond over books — and their first iPhones. But when the older man passes, their mysterious connection refuses to die.

The Emmy-nominated series is back with a season full of tricks and treats as we celebrate Halloween. Featuring ghoulish surprises from some favorite Netflix shows – Umbrella Academy, Cobra Kai and The Witcher, the desserts are intentionally scary this time!

The Trapped 13: How We Survived The Thai Cave

In this compelling documentary, members of the Thai youth soccer team tell their stories of getting trapped in Tham Luang Cave in 2018 — and surviving.

As Northern Ireland takes a big step into the future, so do our girls — but not without hitting a few messy stumbling blocks along the way.

At a hospice with a mysterious history, the eight members of the Midnight Club meet each night at midnight to tell sinister stories – and to look for signs of the supernatural from the beyond. A new horror series from Mike Flanagan and Trevor Macy’s Intrepid Pictures (The Haunting of Hill House, Midnight Mass), and Leah Fong, based on the creative work of bestselling author Christopher Pike.

The Mole is a high-stakes competition series and in this reimagined version, twelve players work together in challenges to add money to a pot that only one of them will win at the end. Among the players is one person who has secretly been designated “the Mole” and tasked with sabotaging the group’s money-making efforts. In the end, one player will outlast their competition and expose the Mole to win the prize pot. New episodes will air weekly for a 3 week event.

Using unprecedented Olympic footage and behind-the-scenes material, The Redeem Team tells the story of the US Olympic Men’s Basketball Team’s quest for gold at the Olympic Games Beijing 2008 following the previous team’s shocking performance four years earlier in Athens. The documentary offers a fascinating portrait of team building and features insightful interviews with athletes and coaches from Dwyane Wade and LeBron James to Mike “Coach K” Krzyzewski, who reflect on how The Redeem Team set a new standard for American basketball.

With topics ranging from tight rompers to ugly bras to why every man needs a box spring, Iliza remains the hilarious, affecting voice of her generation.

Talented home cooks put their skills and creativity to the test making fast and easy dishes that are wildly delicious — and worthy of a big cash prize.

The Playlist centers around the young Swedish tech entrepreneur, Daniel Ek, and his key partners who revolutionized a whole industry by offering free and legal streamed music around the world. It is a story about how hard convictions, unrelenting will, access and big dreams can help small players challenge the status quo by evolving the way we can all listen to music.

The Curse of Bridge Hollow

A father (Marlon Wayans) and his teenage daughter (Priah Ferguson) are forced to team up and save their town after an ancient and mischievous spirit causes Halloween decorations to come to life and wreak havoc.

Food-loving friends Waffles and Mochi get cooking in their very own restaurant, where hungry customers come to feast on flavors from all over the world!

Getting blackmailed. Offending a professional boxer. Trick-or-treating with his son. Gabriel shares his highs and lows in this landmark stand-up special.

“Everybody Loves Raymond” creator Phil Rosenthal travels the globe to take in the local cuisine and culture. This season will feature Phil traveling to all new destinations, including Philadelphia, Croatia, Austin, Santiago and Nashville, and includes a special tribute episode to Phil’s parents, Helen and Max.

The iconic and gripping series returns with a three-week event featuring more unexplained deaths, baffling disappearances, and bizarre paranormal activity. Unsolved Mysteries Vol 3 is from the creators of the original docuseries, Cosgrove/Meurer Productions, and 21 Laps Entertainment, the producers of Stranger Things.

After courting through the walls of private pods, men and women put the power of blind love to the test in this fan-approved reality whirlwind hosted by Nick and Vanessa Lachey.

The School for Good and Evil

Best friends Sophie and Agatha find their bond put to the test when they’re whisked away to a magical school for future fairy-tale heroes and villains.

Descendants of the enslaved Africans on an illegal ship that arrived in Alabama in 1860 seek justice and healing when the craft’s remains are discovered.

In a mystical world of Japanese gods and spirits, a courageous girl strives to follow in her mysterious father’s footsteps and find her true powers.

In this interactive adventure, Barbie goes on a cross-country trek with friends and makes big decisions about the future. Which dream will she choose?

It’s good to be Fortune Feimster. Filmed at the Chicago Shakespeare Theater, the always loveable and incredibly charming comedian and actress is back for her second hour-long Netflix comedy special, Good Fortune. Expanding on her confessional brand of comedy and how she’s different than what meets the eye, Fortune reflects on her own good fortune, including some big life events she’s experienced the last couple years like falling in love with her wife and the extravagant proposal she planned that didn’t go as expected, and much more.

Amy, a compassionate nurse and single mother struggling with a life-threatening heart condition, is stretched to her physical and emotional limits by the hard and demanding night shifts at the ICU. But help arrives, when Charlie, a thoughtful and empathetic fellow nurse, starts at her unit. While sharing long nights at the hospital, the two develop a strong and devoted friendship, and for the first time in years, Amy truly has faith in her and her young daughters’ future. But after a series of mysterious patient deaths sets off an investigation that points to Charlie as the prime suspect, Amy is forced to risk her life and the safety of her children to uncover the truth.

All Quiet on the Western Front

Season six of Big Mouth, the fan beloved, critically-acclaimed and Emmy-winning adult animated comedy about the glorious nightmare that is puberty, will premiere October 28, 2022. Inspired by Kroll and Andrew Goldberg’s childhood, it follows a group of friends and their hormone monsters as they navigate adolescence, human sexuality, and coming of age. Season six focuses on the theme of family as the beloved characters continue each of their journeys, discovering that while you can’t always pick your family, you can surround yourself with those that love you for who you are. The series is co-created and executive produced by Nick Kroll, Andrew Goldberg, Jennifer Flackett and Mark Levin.

From the delightfully wicked minds of Henry Selick and producer Jordan Peele, comes Wendell & Wild, an animated tale about scheming demon brothers Wendell (Keegan-Michael Key) and Wild (Peele) – who enlist the aid of Kat Elliot – a tough teen with a load of guilt – to summon them to the Land of the Living. But what Kat demands in return leads to a brilliantly bizarre and comedic adventure like no other, an animated fantasy that defies the law of life and death, all told through the handmade artistry of stop motion.