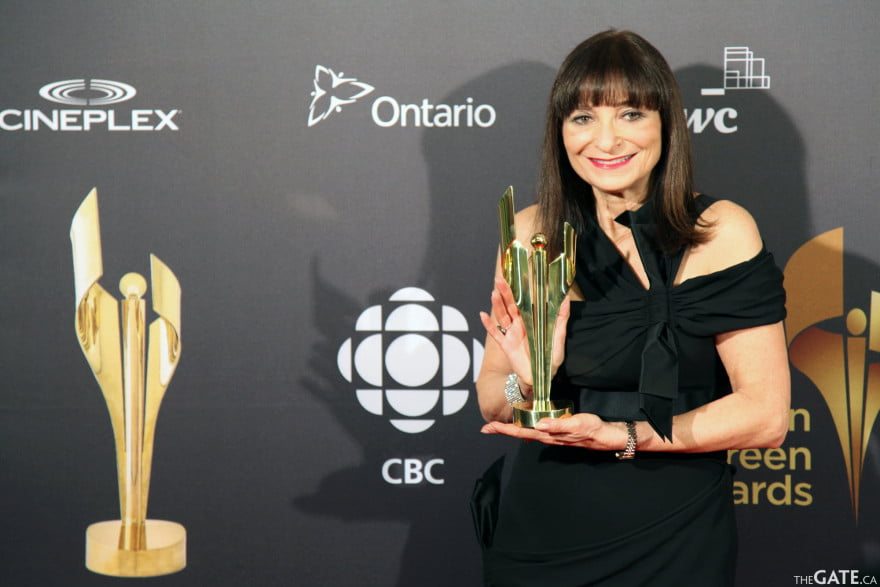 The trophy doesn’t have a flashy nickname yet (I’ve been calling them the Screenies, but when I asked Richard Crouse, he thinks they should be affectionately called the “Gemininies”), but the Canadian Screen Awards represents the new honour for the best in Canadian film, television, and digital media.

In place of the two previous awards nights for the Genies and the Geminis, the Screenies (or maybe they should be called the Maples?) have gone the route of the Juno Awards, handing out the majority of the trophies during two industry nights, followed by a live telecast for the top awards, which will air on CBC this Sunday, March 3 from the Sony Centre in Toronto.

During the first industry night for the awards, which focused on news, sports, and lifestyle shows, Jeanne Beker was the first winner, honoured with the Academy Achievement Award for exceptional contributions to the Canadian television industry, which is essentially one of the new lifetime achievement awards.

(Beker’s win prompted Ralph Lucas of Northernstars.ca, who was sitting next to me in the press room, to suggest that maybe we should nickname the new award the Jeannies. For some reason, that sounds familiar.)

The second night at the Screenies (I’m sticking with it) was a bit more exciting, however. The press room played host to a number of winners, like Rick Mercer, plus a few presenters, including Sean Cullen, Tara Spencer-Nairn, Adam Korson, Carrie-Lynn Neales, and Zoie Palmer.

What stands out about the Canadian Screen Awards though, at least so far, is that it’s been self-deprecating at almost every turn. Martin Short will host the gala on Sunday, so we’ll have to wait to see what he brings to the show, but industry hosts Steve Patterson (who was hilarious) and Seamus O’Regan joked constantly in their monologues about trading in old awards for cash, and how, if the industry doesn’t recognize each other, who else will?

Of course, the jokes are just jokes, even if some strike a little close to home, and for the most part, Canadians have had a great couple of years between documentaries and especially television shows. The success of Flashpoint, Lost Girl, Being Human, Rookie Blue, The Listener, Murdoch Mysteries, and Continuum all point to the fact that the industry is probably better than its ever been.

(It’s also worth mentioning Seed, the only Canadian sitcom on television right now, plus shows like Warehouse 13, and the upcoming BBC America/Space series, Orphan Black.)

Back to the awards, I think that the new format makes a lot of sense. The Junos have paved the way for this kind of festival, since they started doing it more than a decade ago, and it means that something that could be a very long, boring night, can become something multi-faceted and exciting for a much larger audience.

While I do think that the Junos can host a wider range of events, just by the virtue of being a music event, the Screenies still have a lot of room that they can grow. This year is a great start, but I want to see where the Canadian Screen Awards can evolve, and I think they could become a major cultural touchstone in Canada—more so than either of the previous awards were in the past.

Imagine a week-long film festival unspooling at TIFF Bell Lightbox, a night of music, perhaps, and a red carpet that boasts the biggest stars in Canadian and international film. There is no reason that in the next ten years all of those things can’t happen, and likely more, but time will tell.