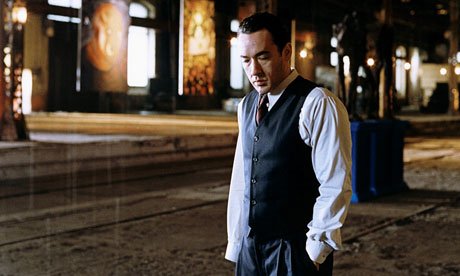 The 2002 Toronto International Film Festival is quickly becoming history as events begin to wind down and some of the guests start to depart. Today, one of the darker days in history and a tough time for many, marks the point in the festival when last year’s red carpets were removed and things took a much lower key in respect to the events in New York. With that in mind I went to see a film called 11’09″01 last night (which will be a Gala presentation tonight).

As a film, it was interesting, and the concept was brilliant–11 filmmakers from across the world were given the task of making an 11 minute, 9 second and one frame long film that somehow reflected their thoughts on the disaster of September 11th. The effect was a striking 135 minute film that challenged the senses and definitely made me think. The film was by far not a complete success though and I think a few of the filmmakers were less than inspired in their productions, but huge kudos go out to Sean Penn, Claude Lelouch and Alejandro González Iñárritu for their inspiring and moving perspective pieces.

Otherwise, the last couple of days have been busy, but not as tormented as last weekend. I attended quite a few press conferences, including the ones for Max and Phone Booth yesterday. The photos of John Cusack and Leelee Sobieski from Max turned out great and I should have them online by tomorrow.

Monday night, I ended up catching both Max and Deadend.com, and I was totally impressed with what Max had to offer. While it was a film that deals with the theories of Hitler as he might have been in his younger years, it handled the subject matter brilliantly and all of the performances were totally powerful. It also has one of the most powerful scenes in cinematic history, in my mind, and will definitely be up for an Oscar or two next year (the film is slated for release in December).

Deadend.com on the other hand was a bit less amazing. It was way too long, crawled at a snail’s pace, and didn’t really push the boundaries that I thought it could have. One neat thing though was the fact that it was presented on digital projection, and while the film was pretty low quality, I have to say that seeing the opening bits proves that digital has come a long way–it made the colors and lines of the Festival’s opening trailer look sharper and brighter than any of the film-projected versions I saw at any of the other theatres… but, who knows how often we’ll get to see films that properly use digital’s capabilities. (On a mass-market level, I’m sure that Roger Ebert is right in saying that digital projection still has a way to go before it’s going to be as good, or better, than standard film)

Tonight, I’m taking some time off to relax, but I’ll be back tomorrow with more reviews and juicy bits from the festival, so check back soon!