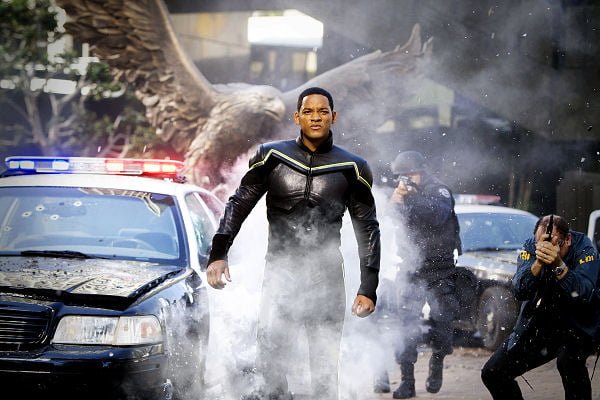 Will Smith in Hancock

Arriving this week, Will Smith plays a wanna-be reformed superhero in Hancock, Vince Vaughn is Santa’s no-good brother in Fred Claus, and don’t forget about A Colbert Christmas, the new special edition of 300, 24: Redemption, and Freaks & Geeks: Yearbook Edition.

Hancock [Blu-ray and DVD]
The Hollywood playbook for superhero movies has one key characteristic in bold type on the first page: the hero has to be flawed. Superman is one of the few heroes who arrived on-screen without any character faults, but director Peter Berg takes the whole idea of imperfection in a champion to new levels with one of the most drunken, abusive, and yet compelling heroes this year.

Will Smith stars as the perpetually sloshed Hancock, a bullet-proof hero who will come to save the day when the bad guys are running rampant around the city, but you just have to be prepared for a little property damage. In the opening sequence, Hancock, who is dressed like a hobo, stops a car full of gun-totting thugs, only to cause millions of dollars worth of damage as he overreacts, rips up the freeway, and tosses a car on top of a Los Angeles monument.

What follows however is a chance for Hancock to rediscover his real identity, which he lost a long time ago after he woke up in a hospital with no memory and a cracked skull.

Smith’s charming performance carries the film, not to mention an enjoyable side-kick routine by Bateman, who injects some much-needed levity into some otherwise dark scenes. Charlize Theron as Ray’s wife Mary is likewise a treat, although her part in the film ushers in a strange second-half which nearly sinks all the great elements that make the first half of the movie work.

Berg’s attempt to change the hero story works for the most part in Hancock, but I can’t imagine why the filmmakers chose to flip things so dramatically for the latter-half of the film. It’s essentially my only huge complaint with this otherwise amusing, somewhat dark, and energetic story.

Fred Claus
There is just no getting through the holidays without the arrival of a handful of new Christmas-themed movies, and while some years bring us the genius of Elf, or Bad Santa, sometimes we have to settle for something a little less clever.

In David Dobkin‘s holiday comedy, Vince Vaughn is Fred, the disgruntled brother of the overachieving goodie-two-shoes Nicholas Claus, played by Paul Giamatti. Since the two were kids, Fred and Nicholas tried to get along, but every time Fred would do something nice for his brother, Nicholas would end up hurting his brother with grand gestures, like cutting down his favorite tree just so they could all enjoy it inside the house.

Jump ahead a few hundred years, after Nicholas was sainted, which also stopped them all from aging, and Fred wants to have nothing to do with his family. Fred lives in the big city, far away from the North Pole, and makes ends meet by constantly scheming, and sometimes pretending to be a street Santa to earn a few bucks. But when he gets taken away to jail and needs bail, the only place he can turn to is his brother, Santa Claus, who bails him out, and even agrees to his brother’s request for more money, but only if he’ll come to visit him and work off the debt.

What follows is a random, oddball comedy about rocking elves, some strange organization that runs all of the major North American holidays, and how two brothers came to be so different.

Also starring in the film are a mish-mash of celebrities, playing sadly under-developed roles. Most notably, Miranda Richardson as Mrs. Claus, Kathy Bates as Santa’s mother, and Rachel Weisz as Fred’s girlfriend. Elizabeth Banks was a treat, but is little more than window dressing in her role as Santa’s assistant. Only John Michael Higgins gets a decent role, and makes great use of his time on screen as Willie the elf.

Fred Claus has its moments, and it’s often sweet and funny, but it’s no classic. I really enjoyed Vaughn and Giamatti as brothers, but the film falls apart under the weight of far too many random, dysfunctional moments. It’s also a hard sell for a Christmas movie since there seems to be some dubious moral messages for the kids, making it more of an adult comedy in my mind. I was also sorely disappointed by the weak special effects, where people’s faces were placed on mini bodies to play some of the eleves, which was poorly done and hard to believe.

The DVD comes with a few features, including 25 minutes of additional footage and a commentary by the director.

A Colbert Christmas: The Greatest Gift of All
Television’s wonderfully weird and witty Stephen Colbert brings his own special brand of Christmas special to DVD, with the help of a few celebrity friends, including appearances by Toby Keith, Feist, Willie Nelson, Jon Stewart, and Elvis Costello, to name a few.

Trapped in his cottage while a bear waits for him outside, Colbert and friends sing their favorite new holiday jingles, and make fun of themselves along the way.

300 [Blu-ray and DVD]
Frank Miller‘s ultra intense, surrealistic story of love and death (but mostly death) arrives in a super-special collector’s edition that includes an art book, posters, a lucite display with an image from the film, and, oh yeah, the movie. Packed with special features, and including a second disc of extras, the package is a great gift idea for the fan that wants even more 300 in their life, or maybe for the folks who just like watching Gerrard Butler in a diaper.

24: Redemption
Debuting on DVD this week just days after it appeared on television, 24 makes its triumphant return to television with agent Jack Bauer, played by the great Kiefer Sutherland, fighting in the midst of an African military coup.

Freaks & Geeks: Yearbook Edition
One of my favorite television series debuts in a special Yearbook Edition, complete with all eighteen episodes, and loads of features. Acting as a proving ground for producer Judd Apatow, and many of his favorite directors, writers, and actors, Freaks & Geeks is a little known series about two groups of teenagers handling life in your average high school. It’s an ingeniously clever, and funny series that was cut all-too-short, but gladly gets the extra special treatment on DVD.