Film Friday: ‘Day the Earth Stood Still’ & ‘Nothing Like the Holidays’ 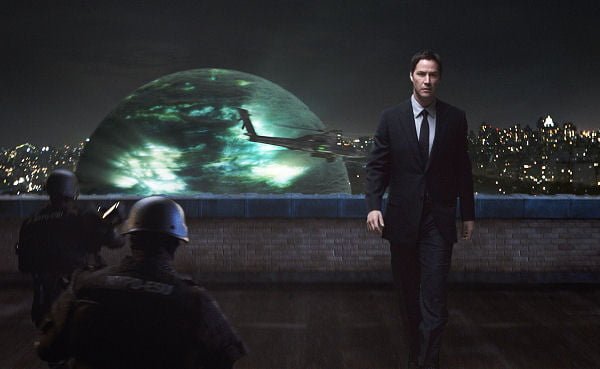 Keanu Reeves in The Day The Earth Stood Still

Gort and Klaatu are back on Earth, this time in the remake of The Day the Earth Stood Still, starring Keanu Reeves and Jennifer Connelly. Also debuting in theatres, John Leguizamo and Debra Messing star in the dramedy Nothing Like the Holidays, two rival races face a war because of a friendship in Delgo, and a priest is accused of impropriety in Doubt.

The Day the Earth Stood Still [Also in IMAX]
Keanu Reeves deserves some kudos, if you ask me. Since the 90s he has starred in some huge films, playing incredibly iconic characters that made him a household name. And yet, I’ll also admit that he hasn’t exactly been stretching his acting muscles very much. A trend that continues in The Day the Earth Stood Still, where Reeves plays, what else, an emotionally detached Übermensch.

Meanwhile, Helen is trying to protect her son, played by Jaden Smith, while also deflecting the oppressive intentions of the Secretary of Defense, Regina Jackson, played by Kathy Bates.

The problem comes half-way through with the introduction of the menace, which is supposed to instil us with fear for the future of the world. In opting for a unique menace, however, the filmmakers have essentially drained any real emotion from the ending. You kind of care about Helen and her step-son, but it’s hard to feel anything for Klaatu, or the fate of humanity.

Nothing Like the Holidays
There are way too many holiday films that come out each year, vying for a chance to be considered a new classic. Across the board though, most of the holidays films are so bad, it’s hard to imagine what these filmmakers were thinking. And yet, with Nothing Like the Holidays, I’m getting some good vibes.

John Leguizamo stars with Debra Messing as Mauricio and Sarah, a married couple visiting with family for Christmas. Amid the squabbles and the celebrations, the Mauricio’s family learns that their parents are getting a divorce. As they try to deal with their problems, they will also begin to realize just how much they care about each other.

“Falling somewhere between a telenovela and a sitcom’s big holiday show,” Kirk Honeycutt wrote in his review for the Hollywood Reporter, “Nothing Like the Holidays mixes family melodrama with the good cheer of the season, all with a distinct Latin flavor.”

The animated Delgo features the voices of Freddie Prinze, Jr., Jennifer Love Hewitt, Chris Kattan, and Val Kilmer in a fantasy about two creatures from rival races, who forge a friendship that could bring about a war, thanks to an evil Empress voiced by the late Anne Bancroft.

Doubt stars Philip Seymour Hoffman as a priest in the 60s who is accused of having an improper relationship with one of his students.

And opening in Toronto this week, Toronto Stories combines the talents of Sook-Yin Lee, Sudz Sutherland, David Weaver, and Aaron Woodley with four tales woven across the fabric of the city. Toronto Stories debuted at this year’s Toronto International Film Festival and also stars a few of my favorite actors, including Gil Bellows, Lisa Ray, and Carly Pope.