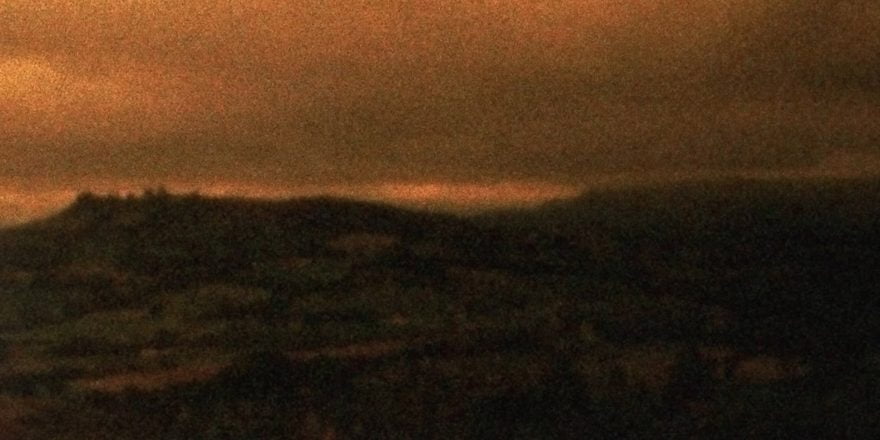 Colombian born filmmaker Lina Rodriguez is no stranger to the walls of the TIFF Bell Lightbox. Her previous feature films, 2013’s Señoritas and 2016’s Mañana a esta hora, both received theatrical runs at the festival’s year-round venue. Her latest effort, the ethereal, instinctual, and observational short ante mis ojos, will have its world premiere at the festival, screening as part of the first programme of short’s in TIFF’s venerable and artistically minded Wavelengths section.

Rodriguez, who has been dividing her time between Canada and her native Colombia for the past several years, finds the filmmaker returning to a culturally significant portion of the natural world; a place where the director wrestled with her own feelings about returning to her homeland and her status as an immigrant filmmaker. Shooting with an Super 8mm camera, Rodriguez studies these feelings of in-between-ness by observing the Guatavita Lake area of Columbia from differing angles and perspectives. Guatavita Lake holds significance not only to Rodriguez (who would travel there as part of school trips in her youth), but also to the indigenous Muisca people. The site was the inspiration for the legend of El Dorado, and has remained a major tourist destination throughout the years.

By travelling back to Guatavita Lake, Rodriguez hoped to create an impressionistic and personal portrait of an historically significant place, subtextually asking if such richness can be viewed simply through what lies in front of our eyes.

Rodriguez took some time out from developing her next feature film, So Much Tenderness (which she is developing with the TIFF Writer’s Lab and is due to become her first work to be shot in Canada), to talk about ante mis ojos.

One of the first things I was struck by in the film was your choice of images, and how the editing took cues from varying perspectives. Although you shot the film yourself, how long was the editing process and choosing the perspectives and angles that worked the best?

Lina Rodriguez: It’s been almost 10 years now that I have had a Super 8mm camera, which my partner and producer Brad Deane gave me as a wonderful birthday gift. I try to bring it with me anytime I travel so I can register spaces that interest me. Four of my prior experimental short films (Convergences et rencontres, Pont du Carrousel, Einschnitte and Protocol) were shot in Paris, Vienna and Cartagena, respectively.

Last year when I was in Colombia in March, I decided to go to the Laguna de Guatavita, as I hadn’t been there for a while and it is a place that I have always found fascinating. I had brought two rolls of Wittner Chrome 200D with me, so I asked my parents to give Brad and I a ride. I called my friend Camilo Martinez (who also did sound for my second feature, This Time Tomorrow) and asked him if he wanted to hang out and record sound of the space while I shot the two rolls. Just like with all of my experimental shorts so far, I didn’t have a predetermined idea of how I wanted to shoot. I actually didn’t necessarily have a clear intention to make “a film”. I was more interested in being present, reacting to the moment and documenting that time and space.

A few months later, after I had processed and transferred the footage, I started to wonder if there was a way to organize the footage into a film, so I started to work with it. The 2 rolls of film shot at 18 frames per second are equivalent to about 7 minutes. The final film is 7 minutes and 18 seconds long, from which one minute and 18 seconds are the credits. This means that out of the 7 minutes of original footage, I used about 85.7% in the final film. This happened as a result of the implicit rule that I often give myself when trying to sculpt footage I have collected into a film: I push myself to work with what I have and use as much of it as I can.

The different perspectives that you note are indeed my positions in relation to the space during the time we were there, but as I said, I had no plan. Each shot is the result of the decisions I made in each moment, based on distance, access and my reactions. As I was editing, it became clear that there were 3 sort of different movements in terms of how close we were to the lake (the ascent to the actual lake involves walking and then climbing about 150 steps), so I decided to build the film in the three sections, which ultimately follow pretty closely our actual route that day.

You had visited Guatavita Lake several times previously in your life, and at one point in the film we can hear that tourists are nearby, which is to be expected when visiting a place that’s so rich in history, meaning, and natural beauty. When you are making a film that’s so closely tied to personal perspective, how hard is it to remain objective as a filmmaker and distance yourself from that notion that you are also a tourist on this natural land?

Lina Rodriguez: As a filmmaker, when I approach time and space with a camera I always ask myself: “Who am I?” “What I am looking at?” “How am I looking at it?” As I mentioned, although I didn’t have a specific plan, I was pretty aware from the get go that I was there as a tourist, which is why I ultimately decided to include Camilo’s voice as he logs the different sound takes. The title itself is also an acknowledgement of my presence as a filmmaker. A possible English translation of ante mis ojos is “before my eyes”, which for me is a reminder that I have a pair of eyes, and that I am trying to see (it is not easy to see) and invite others to see what is in front of me, but also to reflect on what has happened before me.

In a way the film is an impression of the Laguna de Guatavita, it is a document of a time and place from my perspective. I am intently looking at the surface of these images to find out what they reveal about the history of this place through texture, light and contrast. There are limitations in the way I see as well as in the way we can understand the images themselves and the history they may or may not reveal.

There’s a natural, serene quality to your work on this film. Was that something that took extra care to craft and properly capture? Did you film material from other perspectives that might not have necessarily had the same vibrancy and stillness?

Lina Rodriguez: As I mentioned earlier, I used most of the footage I shot that day, but the few shots that I didn’t use are pretty similar in terms of the serene quality that you speak of. Now, in terms of the colour, texture and contrast of the images, that is part of the beauty of working with film (and Super 8mm in this case in particular), as you cannot see the results of what you have shot right away. Often during our walk that day, I wanted to capture different moments and spaces that I knew could be totally underexposed but I decided to take the chance and shoot them anyway. Once I got the footage processed and transferred I was very excited to see that some of that incredible incandescent light had been captured, and that the haunting quality of the space was palpable in the images.

Setting aside the historical significance of Lake Guatavita, does being there help to reconnect you to the natural world? Did the process of making this film in a place you had visited before give you a greater appreciation for the natural world around us?

Lina Rodriguez: I am not sure I reconnected to the natural world either by being there or by making this film even if being there is a very special experience. Although at times it can feel very calm, it is also unnerving given the contrast between the lake’s natural beauty and the traces from the many desecrations it has suffered by gold crazed Spanish conquistadores along with many other outsiders as a result of the legend of El Dorado. For example in 1850, a wealthy Bogotá merchant named Antonio de Sepúlveda cut a notch into the rim of the lake (which is still visible today) using indigenous labour.

The film is an impressionistic study that tries to capture the essence of a place, whether or not that is even possible. When we look at nature, we are not only facing our own gaze and presence in that time and place but we are at the same time trying to find a way to absorb the layers upon layers of history imbedded in them before our time. Of course history depends on who tells it and how it is told, and in Colombia just like in Canada, European colonization has shaped the way the original inhabitants of these lands are viewed and valued, and how the imposed post-colonial narrative has robbed us all of the rich indigenous culture and history of our continents. We contribute to history by the way we look at places, people, things, landscapes, ourselves, etc… I guess what I am trying to say is that for me the natural world is not separate from history and ultimately the film is in a way dealing with the impossibility of representing this history succinctly.

In some ways, ante mis ojos is a bit of a departure for you as a filmmaker, especially following your recent features. Given that your career has been evolving lately, was there some trepidation in stripping your work back to something more primal and ethereal, or was that something you always wanted to do?

Lina Rodriguez: It’s interesting because I do not see ante mis ojos as a departure in my work. Of course, I can see how it can be interpreted this way as it is obviously different to my features on the surface (it is not a “fiction”, there are no actors per se, although it can be argued that Camilo is playing the role of sound recordist and I am playing the role of a tourist), but the way I use framing, duration and editing as punctuation to create rhythm and lighting to deepen atmospheres are formal interests that are present in my features as well. Another thing in common is my working methodology, in the sense that for both short and feature films I have some initial ideas (documenting a place or using a script as a guide respectively), but I am mostly interested in remaining curious, present and open (actually hopeful) for these ideas to be transformed, either through collaboration and/or contact with the specific times and spaces.