Review: The River and the Wall 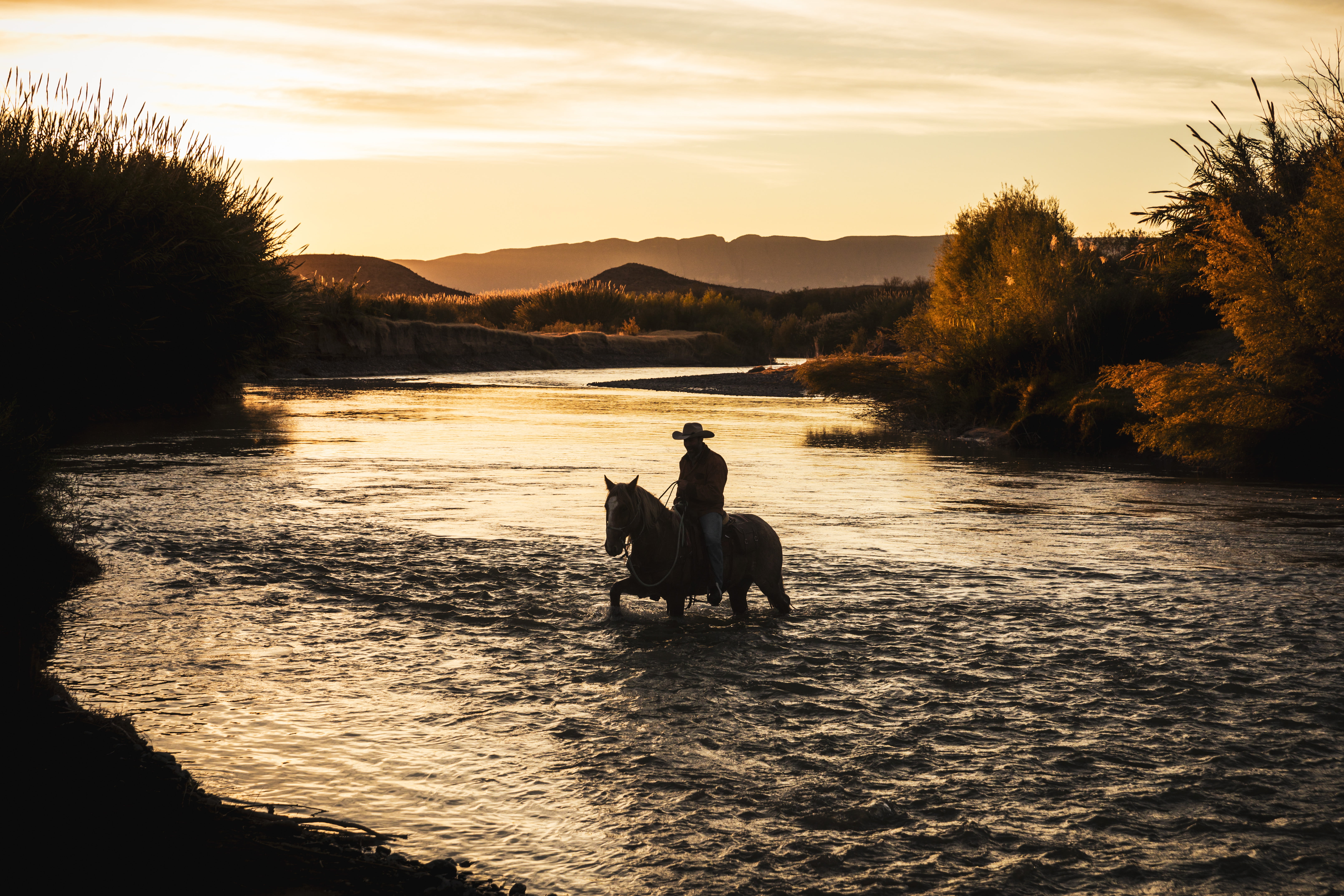 A bittersweet and transformative look at a landscape that could forever be altered or lost thanks to a xenophobic campaign promise run amok, the documentary The River and the Wall looks at both the ecosystems that could be destroyed thanks to the building of Donald Trump’s wall along the U.S./Mexico border and the futility of constructing such an edifice in the first place. While the construction of such a border wall (which was actually started back in 2006, via an idea first formulated during the Clinton administration) is a powerfully symbolic one, it’s also wildly impractical. At one point in The River and the Wall, a member of the documentary crew states that an easily scalable wall without much in the way of human or technological protection isn’t going to stop someone who’s already walked thousands of miles in a bid to flee violence, poverty, and persecution, and the film provides solid proof of the foolhardiness of such an endeavour. Director Ben Rivers and his four fellow travellers also more eloquently and evocatively expose the border wall as a dangerous, ill planned land grab that could destroy some of America’s most pristine conservation areas along the Rio Grande and put thousands of farmers on both sides of the border out of business.

Director Ben Masters – who was one of the subjects of the 2015 Hot Docs Audience Award winner Unbranded – teams up with four fellow ecologists and filmmakers for a months long journey from El Paso, Texas to the Gulf of Mexico, effectively traversing the largest patch of the border between the United States and Mexico. The Rio Grande essentially provides a natural border between the two countries, and Masters, river guide Austin Alvarado, biologist and ecologist Heather Mackey, wildlife filmmaker Felipe DeAndrade, and conservationist Jay Kleberg navigate some of the harsh, rough terrain through a combination of bicycling, kayaking, and horseback riding. Along the way, the documentary crew will marvel at the natural wonders along the Texas border, which includes hundreds of thousands of square miles of untouched national parklands that have been earmarked for decades to create a binational park, similar to one shared by the United States and Canada; one that looks likely to never happen at this point.

Strictly from a logistical perspective, The River and the Wall uses nature to prove how building a wall strictly along the Rio Grande is impossible. Large sections of the actual border run through mountains and ravines, where building a wall or fence would be impossible and largely useless. But should the Trump administration build the wall in such locations, it would devastate local wildlife who freely cross the border to obtain food and water. The previously endangered black bear population would be especially hard hit, but the animals who have the most to lose by such an enormous erection would be human beings.

A lot of the land along the U.S./Mexico border is some of the most profitable, year round farmland in Texas, and the people who work the land would find their livelihoods threatened by the wall. Most of the wall would actually have to be constructed miles away from the real border thanks to geographical and geological issues that would make building in or along the banks of the Rio Grande impractical or impossible. The government would need to seize millions of acres of privately owned and operated land (so much for Trump supporting major American businesses) through eminent domain, essentially creating an unusable and inaccessible “no man’s land” that neither country can access between the wall and the actual border. Even with access to the other side of the wall, the point would be moot when one considers that all of the water to irrigate these fams is coming from Mexico, anyway. 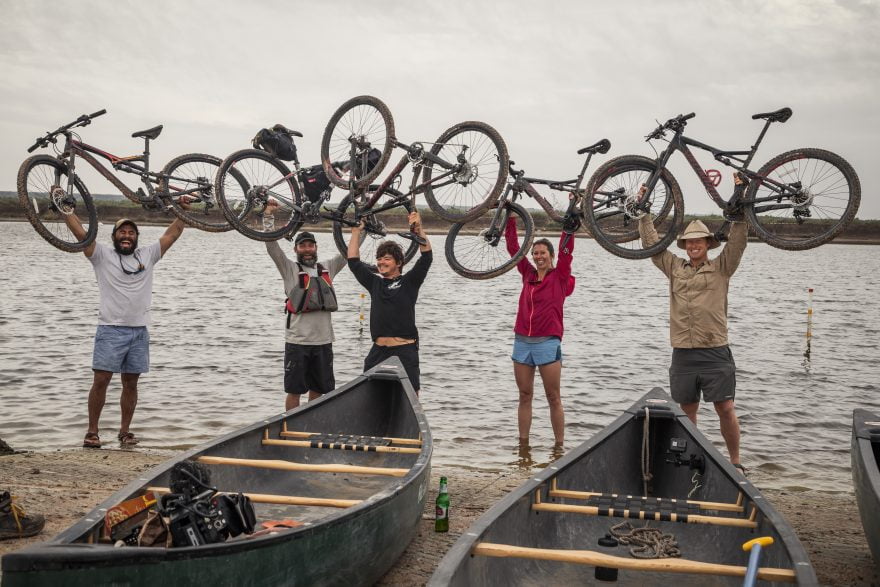 The River and the Wall illustrates everything that makes the border wall such an infuriating prospect, but it never goes as far as to advocate for open, unchecked borders. Masters and his team of documentarians get great assists from Democratic Congressman and presidential candidate Beto O’Rourke and particularly from Republican Congressman Will Hurd, both of whom represent constituencies along the border. Both speak knowingly and intelligently of the ways the Trump administration’s policies will harm the citizens who elected them, and why a wall doesn’t change any of the already existing problems. Hurd, who actually cycles along with the film crew early into their journey, speaks passionately about how a wall is no substitute for flesh and blood border patrol guards that can more appropriately determine threat levels and technological advancements that can detect illegal crossings at a fraction of the cost. Hurd is particularly frustrated by the current administration’s adherence to “one size fits all” policies that throw any sense of nuance or intelligence to the wind, the latter of which the congressman knows plenty about thanks to his time spent in the C.I.A. Despite the political divide, neither of the congressmen responsible for representing the border think the wall is a sound idea, but their voices, and the opinions of many who depend on a healthy U.S./Mexican relationship are perpetually drowned out by nationalistic fears.

Not that some of those fears are unfounded, but rather that the facts are being skewed and blown out of proportion. Illegal immigration from Mexico to the United States has plummeted in recent years, with most covert border crossings being attempted by people who’ve been escaping from volatile situations further south in Latin America. Mexico has just as much trouble patrolling their southern border as the U.S does, and a lot of their immigration policies are more unforgiving than the Americans. Drug running remains a major concern that doesn’t seem likely to go away any time soon, with or without the wall (something that the travellers think they’ve witnessed firsthand during one particularly intense sequence). A multibillion dollar criminal enterprise can’t be stopped simply by building a wall and calling it a day. It requires manpower and technology that can’t be purchased because all of the money has been allocated to build the wall and walk away from it.

The River and the Wall finds Masters and company exceptionally outlining what the United States stands to lose by building the wall in explicit, surprisingly bipartisan detail, although it admittedly doesn’t look at similar perspectives from the three other states along the border that might be facing different issues. Perhaps most poignantly, each member of Masters’ crew is given an opportunity to explain what this pilgrimage means to them on a personal level. The fact that both Alvarado and DeAndrade are both proud Americans and the children of illegal immigrants adds a lot of emotional weight and context to their professions and their inclusion on Masters’ trip. It’s a nice touch to have each of the core participants in The River and the Wall explaining their reasons for going with a degree of specificity and passion. It’s and impactful aside that rhymes nicely with the opinions of the people they meet along the way on both sides of the border.

It’s also a stunning film to look at, and one that examines man’s relationship to sometimes harsh climates and rough landscapes with a bit of good humour. Through gorgeous cinematography that captures some of America’s most vibrant and endangered ecosystems to action packed travels down some truly gnarly looking rapids, The River and the Wall is a documentary that balances its impassioned sense of advocacy with unbridled wonder and good humour. It’s a tough trip, and some of the team members don’t seem all that prepared for the journey ahead. Three of them can’t ride horses well, Masters is an uncoordinated bike rider, and none of them are fully prepared to kayak through true, unpatrolled, unpredictable wilderness. They take their shortcomings in stride and with a good natured, self-aware chuckle because they love what they’re doing and they might never get the chance to take such a trip again if the wall is completed. They’re grateful for the opportunity, but sad that The River and the Wall might be the last time a group of filmmakers are ever allowed to look at this untouched land before it’s irrevocably altered and damaged. It’s a unique documentary that’s both reverential and sobering at the same time. Here’s hoping it doesn’t turn out to be a time capsule.

Check out the trailer for The River and the Wall: