Another electrifying, articulate, and entertaining effort from director David Fincher, Mank is both a cracking biopic about famed screenwriter Herman Mankiewicz and something far more personal for the filmmaker. Working off a script credited to his late father, Jack Fincher (who passed away in 2003), the Zodiac and Gone Girl filmmaker takes a deep dive into the ego driven nature of Hollywood, with the production of the long argued “greatest film of all time” at its centre. It’s ambitious, passionate, and sometimes too brutally honest for its own good. In short, Mank ranks amongst David Fincher’s finest efforts precisely because it’s made with the conviction of the filmmaker’s beliefs about the nature of cinema.

While recovering from an auto accident in 1940, broken down, alcoholic, arrogant, and (to some) brilliant screenwriter Herman Mankiewicz (Gary Oldman) is tasked with holing up at a Victorville, California ranch to work on a film project for rising stage and radio wunderkind Orson Welles (Tom Burke) and his assistant, John Houseman (Sam Troughton). Welles tells Mank that the script needs to be completed in sixty days, and that the ranch is a dry one, meaning the lush writer can’t have any liquor until work is completed. The good news about the project is that Welles’ studio, RKO, has given him free reign to do whatever he wants without interference. For inspiration, Mank looks back on his time working for MGM and decides to create a film based around media mogul William Randolph Hearst (Charles Dance). With the assistance of his new secretary and typist, Rita Alexander (Lily Collins), a bedridden Mank puts to paper one of the most controversial and celebrated motion pictures of all time: Citizen Kane.

Mank flashes back and forth between past and present to make the screenwriter’s subtext in Citizen Kane’s the overt text here. Citizen Kane was already a politically and dramatically powerful work, but Mank dramatically depicts the writer’s life as something almost as tragic and misunderstood as Hearst’s. During his time in the studio system, Mankiewicz was a masterful bullshitter who took ludicrous and costly gambles inside and outside the boardroom. Like many screenwriters to this day, Mank has the ability to walk into a meeting with executives and convince them that he has an idea for a huge hit simply by bluffing his way through discussions. When put into opposition with Hearst and his extended family – including Hearst’s young lover Marion Davies (Amanda Seyfried) – Mank’s true character is shown, and the writer is pulled into an ongoing political battle between his employers, MGM chairmen Louis B. Mayer (Arliss Howard) and Irving Thalberg (Ferdinand Kingsley) – and controversial left wing author and California gubernatorial candidate Sinclair Lewis. Mank isn’t quite the socialist that Lewis was, but he grows to abhor the lengths that Mayer and Hearst will go to in a bid to keep the Republican party in power following the great depression.

It’s impossible to watch Mank and not draw parallels to modern day politics. In Mank, Fincher tackles the subjects of fake news, corporate election rigging, muckraking, and wealthy elites who refuse to see Nazis as a genuine threat to the American way of life. Today as it was in the late 1930s and early 40s, the gulf between the left and the right was just as wide, and in many ways, Mank is film about an imperfect man with the conviction to stand up for what he believes in, no matter how it makes him look to those holding all the power. The tone of Mank is a pleasing middle ground between Welles’ harsh but grand realism and Capra’s bittersweet feel-good crowd pleasers, or almost like Citizen Kane in reverse, with a character starting at their absolute bottom before rising slightly to a place where his career might be dead, but he at least fought for his principles. It’s a delicate tone to achieve, especially through a character as brash as Mankiewicz, but Fincher pulls off the balancing act with grace and ease.

Of course, not all of Mank is word-for-word accurate, and one imagines that the screenwriter at its centre would be just fine with that decision. The playfulness of the direction and writing makes Mank feel personal to Fincher in ways that go beyond the script’s connection to his father. Mank is a work of passionate frustration and a healthy dose of ego, and one imagines that Fincher (who conceived this concept with his father back when he was working on Alien 3, his first major studio experience, and one he notoriously hated) wanted to say everything the main character says in this picture to many of the executives he worked with in the past.

Mank is one of those stories where the primary character can be written off as a washed-up, self-destructive, haughty jerk with sketchy morals, but he’s put into opposition against outright megalomaniacs determined to retain a stranglehold on their power and influence (with Mayer depicted here as a bigger villain to Mankiewicz than Hearst, with Howard giving a tremendous performance to match). All of Mankiewicz’s outbursts feel like an exorcising of demons for whomever wrote them, and the film gives these moments proper space to breathe and land. Mank is an artist in a business driven world, and his Type-A personality is vastly different from the mindset of those who control the trajectory of his career.

Outside of Fincher’s grasp of the material and his technical proficiency when it comes to recreating the style of films that might’ve been made in Mankiewicz’s time (complete with cheeky “cigarette burns” to denote “reel changes”), Mank dazzles in no small part because of Oldman’s uncanny leading performance. It’s another transformative and fully realized turn from an actor already known for his ability to disappear into a character, but Mank allows Oldman to feel less restrained by his material. Just as Mankiewicz was given carte blanche to write Citizen Kane however he wanted as long as he turned in the first draft on time, it feels like Fincher has put a lot of trust and faith in his leading man to show the character’s passions, layers, and contradictions. Whether Oldman is interacting calmly and subtly with Collins’ secretary (who has excellent chemistry with the actor) or stumbling around and drunkenly delivering a political diatribe during a dinner party, it’s a performance based entirely around remaining truthful to someone’s complicated moral compass. Mank isn’t a perfect person, but he’s not beyond redemption in some aspects of his life. One wonders if Oldman thinks the same about Fincher and vice versa.

As with any recent Fincher effort, Mank is a sumptuous looking film and a technical marvel. The black and white cinematography by Erik Messerschmidt – who shot both seasons of Fincher’s Netflix series Mindhunter, and astoundingly hasn’t lensed a narrative feature before – is assured and captivating. The camerawork nicely captures all of the lovingly recreated period sets, details, and costumes, but also proves that black and white digital cinematography can be just as convincing if employed with care. The score from frequent Fincher collaborators Trent Reznor and Atticus Ross is more swinging, melodic, and big band heavy than one would probably associate with the composers. Another key aspect of Mank is the desire to use a lower frequency sound design that was typical of films from Mankiewicz’s era. Even when viewed at home, Mank sounds like a film being exhibited in a theatre, which is no small feat.

If there’s anything slightly negative to say about Mank it’s that the film never tries to go for subtlety. There’s plenty of symbolism and subtext, but it’s all out in the open for everyone to see, even if they don’t know much about the Citizen Kane screenwriter or the director of Mank. It more often than not works to Fincher’s advantage. Mank is a film that displays its heart and ideals proudly and boldly at every turn. For Fincher, it’s his most earnest work since The Curious Case of Benjamin Button, but Mank feels far more personal and vital to the filmmaker. It’s a big movie made to memorialize a big personality. 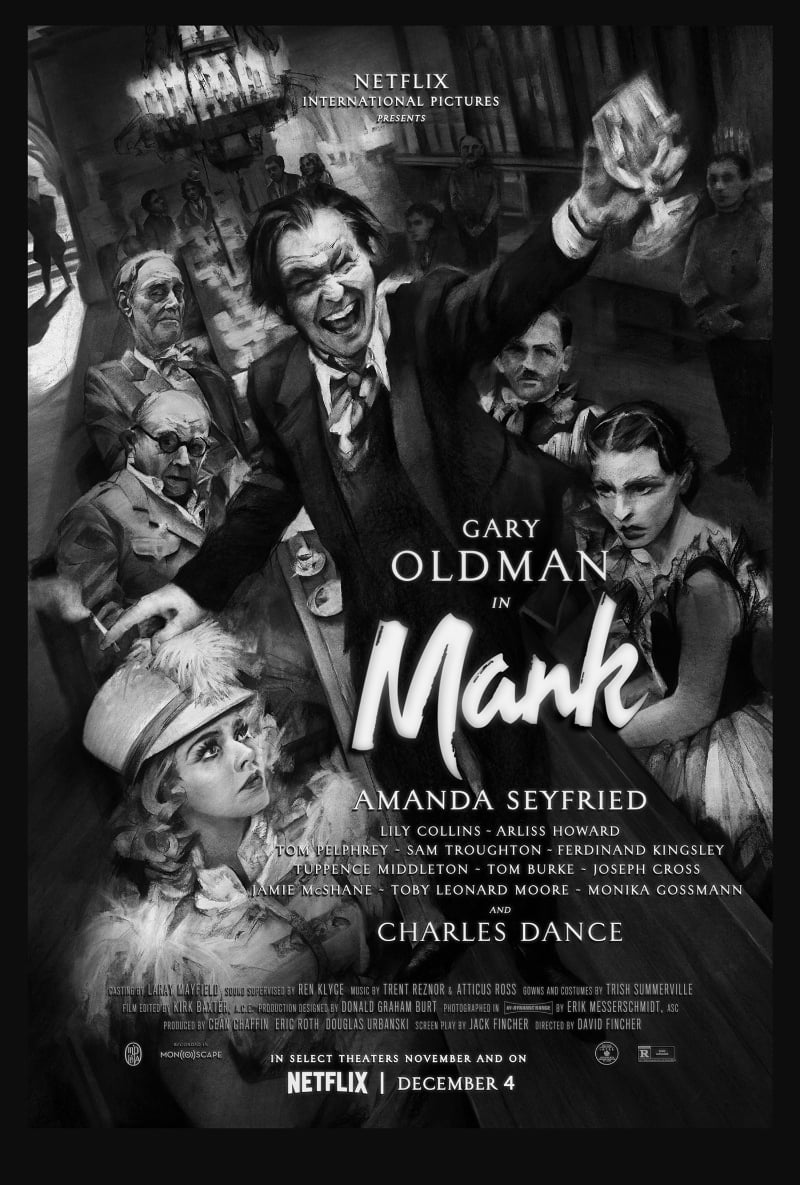