Film Friday: ‘Green Zone’ and ‘She’s Out of My League’ 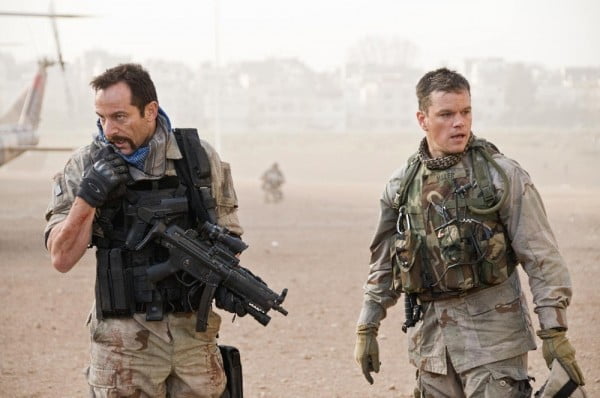 Actor Matt Damon and director Paul Greengrass have teamed up once more for the action-thriller Green Zone, about a covert mission into Baghdad in the early days of 2003 when the United States went hunting for illusive weapons of mass destruction.

Originally paired together for The Bourne Supremacy and The Bourne Ultimatum, Greengrass and Damon seem to be treading on very familiar ground indeed for this film that seems to take a lot of hints from the Bourne trilogy.

In Green Zone, Damon plays Chief Warrant Officer Roy Miller, an Army inspector sent into Bagdad looking for stockpiles of chemicals that could be used in a weapon. Instead of finding the weapons though, Roy and his team discover a cover-up that could shake the region, and push them into all-out war.

Evading traps and digging through intelligence that may or may not prove to be faulty, Roy will have to discover the truth before it’s too late.

Although the previous two Bourne films earned a lot of praise from critics, it doesn’t look like Greengrass or Damon have won over many reviewers this time out.

Critic Brian Orndorf of BrianOrndorf.com wrote, “It’s entertainment first and foremost, with ham-fisted politics popping the mood far too often, sucking away a desired tempo of defiance to play a crude game of Middle East Stratego.”

Although A.O. Scott of the New York Times was a bit more positive. “When Mr. Greengrass made United 93, his 2006 reconstruction of one of the Sept. 11 hijackings, some people fretted that it was too soon,” Scott wrote. “My own response to Green Zone is almost exactly the opposite: it’s about time.”

Despite the fact that it has a simple premise and it’s basically just an R-rated comedy, out of all three of this week’s major releases, She’s Out of My League is getting the best reviews.

Starring Jay Baruchel of Knocked Up and Tropic Thunder fame, the film is all about an average guy named Kirk who finds himself with a drop-dead gorgeous girlfriend that he’s going to have to work hard to keep.

Alice Eve co-stars as Kirk’s beautiful girlfriend, Molly, who everyone thinks is too good for Kirk. But perhaps Kirk just needs a little more confidence to show his family why she found him interesting in the first place?

Peter Howell of the Toronto Star wrote in his review, “We may know exactly where Kirk and Molly are headed — he can’t get over his good fortune and she can’t abide being put on a pedestal — but the movie keeps upending our expectations and provoking laughs.”

The critics aren’t all offering the film perfect praise though.

“[She’s Out of My League] has a lot of spirit and heart and [is] actually quite sweet,” Edward Douglas wrote for ComingSoon.net, “but it tries to shoehorn too many ideas into one movie and not all of them work.”

Finally, a lot of teenagers across the country are probably already lining up for “heartthrob” Robert Pattinson’s lastest film, the romantic drama Remember Me.

Pattinson plays Tyler, a young man at odds with his father, played by Pierce Brosnan, who has only found a sense of belonging after meeting Ally, played by Emilie de Ravin. After a tragedy befell their family, Tyler is amazed how he cares for Ally, but as he finds out some facts and their circumstances change, the two would-be lovers face being torn apart once more.

With a twist that writers have said will become painfully obvious within the first act of the film, Remember Me will not impress everyone. In fact, if you’re anything but a hardcore Pattinson fan, you’ll probably just want to skip this one.

“Allen Coulter directed this morose and sluggish drama,” Andrea Gronvall wrote for the Chicago Reader, “which gets more mileage from Pattinson’s anguished profile than from Will Fetters’s thunderously overwritten screenplay.”

While Michael O’Sullivan of the Washington Post quipped, “After the first hint of what’s coming — which crops up less than 10 minutes into the movie and then doesn’t let up — the foreshadowing becomes so distracting that, by the time the darn thing goes off, there’s only a sense of relief.”