Film Friday: ‘The Social Network’ and ‘Let Me In’ 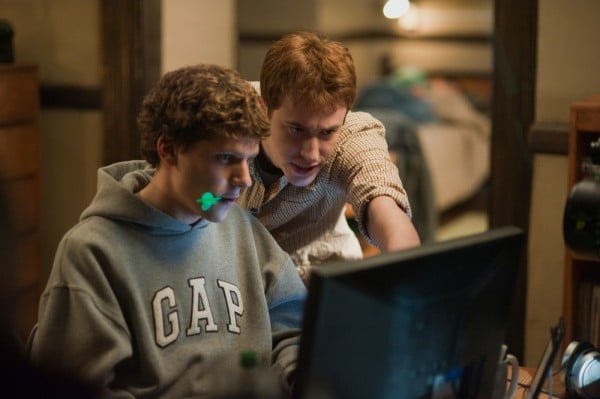 A scene from The Social Network

Opening this week: Jesse Eisenberg stars in The Social Network, the story of the making of Facebook; and the horror-drama Let Me In stars Chloe Moretz as a twelve-year-old vampire making friends with her new next-door neighbour.

Every company has a great story, but Facebook’s origin story is the stuff of legend. It’s a sordid, compelling, tale that director David Fincher, and writer Aaron Sorkin have crafted into what most critics are hailing as one of the best films of the year.

The Social Network is based on Ben Mezrich’s book, The Accidental Billionaires, which tells the story of Harvard brainiac and sophomore Mark Zuckerberg, played in the film by Jesse Eisenberg.

Back in 2003, Zuckerberg was tinkering with an idea to create a MySpace-like site for university students. He would eventually dub the site Facesmash before evolving the idea into something we all know today as Facebook, but the road to his success was not direct, and there are a few people who feel it was also based off of their own work and ideas.

Two identical twins in particular, Cameron and Tyler Winklevoss, who are both played by Armie Hammer, took Zuckerberg to court for intellectual property theft, but that’s just one part of the tale of one of the world’s most well known websites.

As a film fanatic, what really got me excited about The Social Network to begin with was the idea of famed television and film writer Aaron Sorkin working with one of America’s best directors, David Fincher. The two talents have a way with characters, and between Fincher’s direction and Sorkin’s expert dialogue, they could probably make any story interesting. For this turbulent tale, I can’t imagine any other talents more well-suited to the job.

Todd McCarthy wrote in his review for indieWIRE, “On a first viewing, it seems almost indecently smart, funny and sexy. The second time around… half the time I sat there marveling at the similarities of the story, themes and structure to Citizen Kane.”

What’s more, Justin Chang of Variety heaped even more praise on Fincher, writing that the film “[c]ontinues Fincher’s fascinating transition from genre filmmaker extraordinaire to indelible chronicler of our times.”

What he slowly comes to realize though is that Abby is not like every other girl. Something is seriously strange about the equally reclusive girl and she lives with her father who constantly seems agitated and upset, and Owen can hear him screaming through the walls about constant problems.

Directed and written by Matt Reeves, who also directed Cloverfield, Let Me In is a dense, eerie, and intelligent drama with heart and horror. The performances by Moretz and Smit-McPhee are brilliant, especially for such young actors in dark territory, and they have a wonderful chemistry. They make this tough material work brilliantly, and Reeves directs them and amps up the drama at each turn.

Richard Jenkins, who plays Abby’s father, is also brilliant, as is Dylan Minnette who plays the bully, Kenny. It’s a well-acted, driven film that bleeds and moves, motivated by its characters. As a drama, it’s well worth seeing, and as a horror film it is truly inspiring to see an American-ized remake that actually resonates and maintains the original’s intelligence.