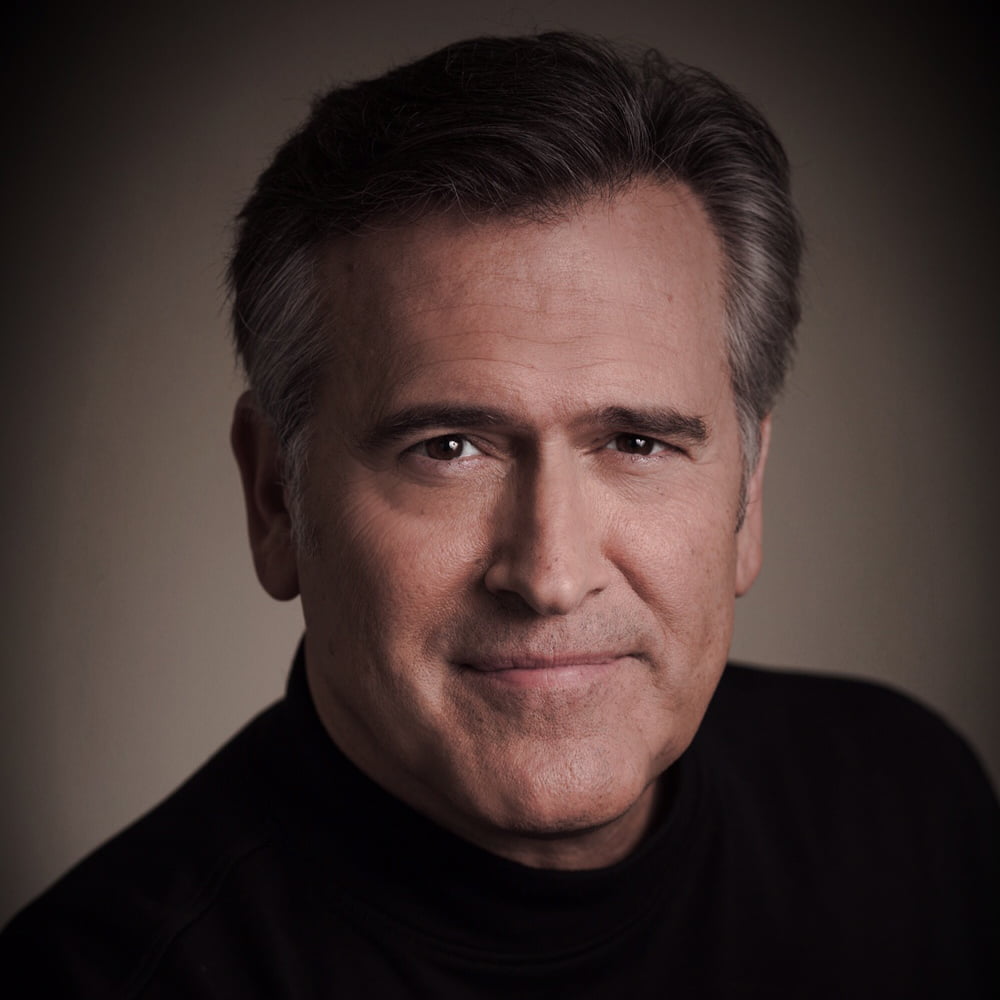 Bruce Campbell is one of my favorite horror icons. He’s fun, acerbic, and honest in the most down-to-earth way possible. This week he arrives in Toronto for Fan Expo, and I had the chance to speak with him about his new book, Hail to the Chin: Further Confessions of a B Movie Actor, the Starz series Ash vs. Evil Dead, and what it’s like meeting fans. Campbell even had some advice for anyone coming out to meet him this weekend.

For my part, I have to admit that chatting with him took me back to 2002, when I sat down with Bruce Campbell and director Don Coscarelli who were in Toronto for the Midnight Madness premiere of Bubba Ho-Tep at the Toronto International Film Festival, and I managed to get half-an-hour with the pair.

For a fan like me, who adored Evil Dead II, and Army of Darkness, it was the first time I had sat down with an icon I admired, and Campbell was fantastic, because he’s a great host, even if he’s playing the host almost as a character. That will come in handy during Fan Expo as Mr. Bruce Campbell hosts Last Fan Standing, a special ticketed trivia show, this Saturday, September 2 at 6:30 PM. If you’re headed to Fan Expo this weekend, from today until September 3, Campbell is also taking part in a celebrity Q&A on Sunday, September 3 at 3:30 PM, and he’s signing autographs and doing photo ops.

Ash vs. Evil Dead airs on Starz in the U.S., and on Super Channel in Canada. 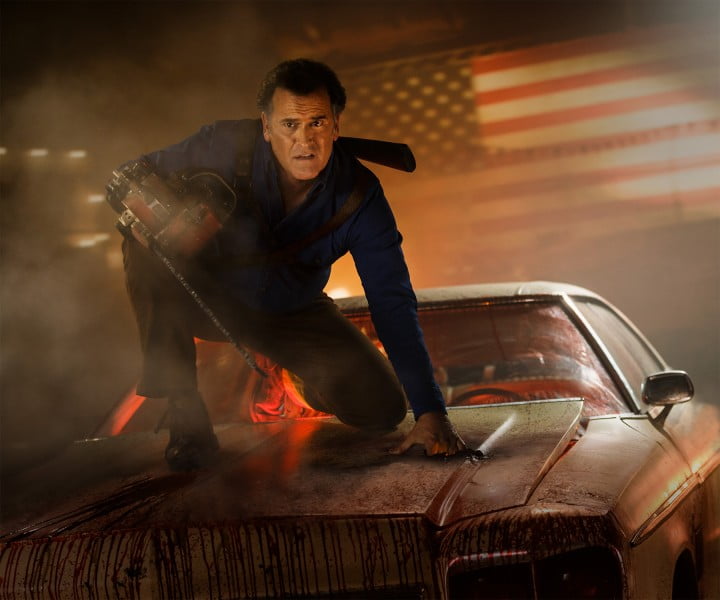 Andrew Powell: What got you into writing another book, and what’s the story like this time?

“Here’s my dad’s joke. ‘I walked out for a cup of coffee when I was 25. I came back, I was 59.’ And I look back over my shoulder, because the first book came out 15 years ago, Confessions of a B Movie Actor, and I thought, ‘Boy, there’s a lot of weird stuff that went down these last 15 years.’ And it seemed like a logical part two of a trilogy. So 15 years from now, I’ll put out the final Confession of a B Movie Actor. So me and George Lucas–we’re into trilogies.”

Powell: I am totally with you on the fact that it’s hard to believe how quickly time flies. Everything kind of sneaks up on you. Do you think, as an actor, does that play out differently for you? I mean, I guess it’s hard for you to say, but do you think it’s different as an actor seeing the years fly by?

Campbell: “Yes. Because my years are probably a little more chaotic. I don’t go to a regular job. I don’t work nine to five. I don’t wear a tie. I don’t have a commute. So, yeah. I guess it’s weird. My commute is Bogota, Colombia. Or Sofia, Bulgaria. And I think what doesn’t kill you makes you stronger. These experiences, I think, are… going to Iraq to visit the troops in ’09, that wasn’t on my initial list. But there you go.”

Powell: You’ve played Ash for a number of years now. What do you think you would have done if Ash hadn’t come into your life?

“Yeah, we were baffled about how to raise money, but we managed to pull it off.”

Powell: It’s interesting that of course money still is a fight that, obviously, filmmakers have to deal with today. It’s always a question of where does the money come from?

Campbell: “Where does the money come from? Then once you get the money, how do you get your movies made? Thank God for the YouTubes of the world! It’s your own little distribution network.”

Powell: Yeah, it’s completely different now in some ways. It would be fascinating to see what you guys would have done today, if you had been doing the same thing.

Campbell: “We would have done some internet YouTube ‘B’ thing. We would have posted all of our movies on it. YouTube… anywhere that was free. We’d try to get on Video on Demand. It would be… well, no. Honestly, we’d take our digital master in a thumb drive, and take it to the local theater, and play it on their digital projector. That’s how that would work. Rather than having to take a laboratory print, 35 millimeter print, and have to throw your shoulders out carrying that up to that projection booth, where they tear it, rip the shit out of it, and scratch it. So it’s an easier deal now.”

“You still have to have drive, though. That’s not going to change any.”

Powell: In terms of Ash vs. Evil Dead, you’ve had the chance to play quite a bit of range in the first two seasons. Is there something though that you haven’t been able to portray in Ash that you’d still like to see before the end?

Campbell: “Yes. Him completely losing his shit, and that’s what happens in season three.”

Campbell: “Ash is pushed over the edge. And he’s a freak. And he’s got to… there’s a daughter in the picture now. We’re going to introduce Ash to having a daughter. An unruly, opinionated, teenage daughter, who, in the middle of trying to save the world, as a middle-aged loser, he’s got to raise his daughter, too. So it’s a great combination, and he can’t handle it. He’s pushed over the edge. And as an actor, there’s nothing more you want to do than to break down.”

Powell: The end of the second season, with the whole “rah-rah” Ash scene, cheering on his success. Is that kind of a weird way to end, considering we’re used to having Ash just ripped apart usually by people? Or was it about any kind of change?

Campbell: “Damn straight! Time for a happy ending! Because you know that’s not going to last. Let the guy have his moment! But, Christ, they’re throwing him a party–let him have it! Everyone knows he’s short-lived. We’re just kidding ourselves. Everyone knows that.” 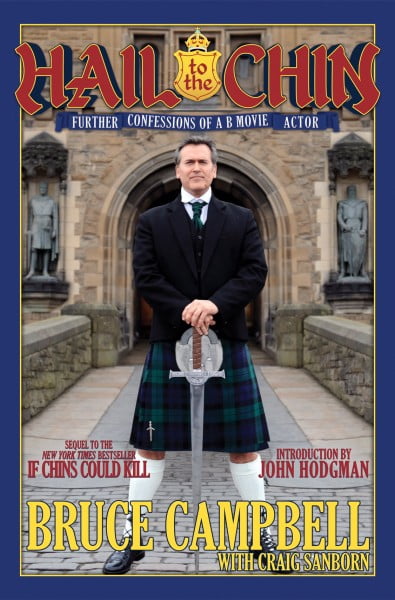 Bruce Campbell’s Hail to the Chin: Further Confessions of a B Movie Actor

Powell: I know you’ve also said about the fact that the third season is going to have more time travel, and potentially parallel universes. How much of the third season relies on that versus the Earth we know?

Campbell: “We’re mostly on earth, but it gets weirder as the season goes on. I mean, as we crack open the mythology of that, because he’s not just a loser in a trailer home, he’s actually foretold in an ancient book. Because his picture’s in there. So it was fun this season to get into that a little bit. There’s a Joseph Campbell mythology of it all. Like, why him? Why is the average man… why are these demons testing the mettle of the average man?”

Powell: Do you talk about Joseph Campbell? Because that would make me really happy.

Powell: That would be a fascinating story, to take on Ash through the eyes of Joseph Campbell.

Powell: For me, watching the second season, it really pushed boundaries that we don’t see other shows push.

Powell: Do you think you don’t get enough respect for that? Because I feel like you’re doing stuff that most shows don’t even try. Maybe some don’t need to be pushed, like heads up butts, but do you…

Campbell: “Oh, yeah. Yeah, yeah. Well, I’ll say this with great confidence. We’re doing the most difficult television out there. Period. End of story. I defy anyone to pull off the shit that we are in a half an hour.”

Powell: And the fact that the effects, for how much time you guys have, and everything else, are tremendous on top of that.

Campbell: “It’s just gratifying. A, that the fans have embraced it as a show, and the new characters. But we’re also grateful now, with the help of our intrepid TV crew, that now the critics can’t make fun of our shitty special effects. That was the thing they always did with the Evil Dead movies, and now it’s like, you know what? The acting is better. The writing is better. The directing is good. The cinematography is fucking amazing. The effects are great. The special props. I mean, these are our TV brothers. These guys go back to Hercules and Xena. So we went back and worked with the experts this time.”

Powell: Well, on a different note, is there some point where The Classic needs to be retired, or would that only ever happen if Ash retires?

Campbell: “The Classic will only go away if Ash goes away. There’s no way to get rid of The Classic. There’s no point in trying.”

Powell: I especially loved “Last Call” from the second season, with the car getting possessed. That was fantastic.

Powell: What do you say to the critics of Ash, who perhaps don’t like the misogynistic tone? Even if it is tongue-in-cheek. What would you say about that side of the show?

Campbell: “Look, that’s the character! He’s an idiot! Get over it. That’s the way the character’s drawn. And look, he takes these incremental, Archie Bunker baby steps. He’s not a complete asshole, and he’s not completely insensitive. And that’s part of the beauty of introducing a daughter, and his father last season. His father’s coming back this season, too.”

Powell: Yes, I adore Lee Majors. The Six Million Dollar Man reference in the last season was great too.

Campbell: “I mean, you had to have it. When we knew we were looking for Ash’s dad, we were like, ‘There’s no other choice!'”

Powell: In terms of coming to Toronto for Fan Expo, what do you take away from meeting with the fans? Because you’ve been doing it for years, but it must take a bit out of you. What’s that like?

Campbell: “It’s like speedballing. It’s heroin and cocaine at the same time.”

“But honestly, it’s a mostly fun place to be. I wish fans were a little more talkative. They tend to clam up at the table. It’s a great opportunity to see what on earth… what are they buying? What are these people buying? I’ll be selling my book there. So hopefully we’ll have a lot of fun with that. You know, I like the fact that these people are into what they’re into so much. They’re people who want to come and have a good time, and I’m right there with them.”