A peek inside the ‘Halo Wars’ demo 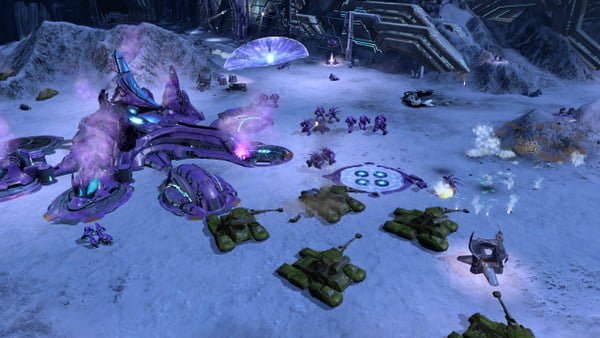 UNSC forces arrive at a Covenant base in Halo Wars

Microsoft Games and Ensemble Studios released the demo of Halo Wars on Xbox Live today, with an all-too-quick sample of what we can expect when the game debuts March 3 on the Xbox 360.

Set 20 years before the events of the first Halo, Halo Wars kicks off as the UNSC forces clash with the Covenant, who start out the game looking for an artifact on the planet of Harvest.

Originally controlled by humans, Harvest was laid to waste by the Covenant, and is only now coming back under UNSC control after a difficult series of battles.

With the arrival of the UNSC ship Spirit of Fire, which is commanded by Captain Cutter, the story unfolds, revealing just what happened before the battle we have come to know in the original Halo.

In this real-time strategy game, your goal is to first reclaim a foothold on the planet, and then deal with the Covenant forces. Throughout the game, a number of key characters are at your disposal, backing you up as you build your bases, research new technologies, and discover what it takes to bring down the enemy.

Of course, that is only if you want to take on the story. If all you want to do is prove how superior your strategic mind is against your friends, there’s also the skirmish mode which lets you play one-on-one (or one-on-six) against friends or random Xbox Live players.

Moving the Halo franchise into the realm of real time strategy games was a great idea, but there is no question that gamers are going to be comparing it against the numerous titles that paved the way for Halo Wars. Most notably, I can’t help but think of the three Warcraft titles which helped define the genre.

Next to those titles, Halo Wars is definitely no slouch, and developer Ensemble Studios has taken a well-worn concept and recast and sharpened what will almost undoubtedly become a huge hit in the Halo universe.

Will it be Halo 2 or 3 big? I find it hard to imagine, but all the elements are here for a massively addictive title.

First of all, Halo Wars is an incredibly easy game to understand, but as with all RTS titles, it’s all about how you make use of your units, bases, and upgrades.

In regular skirmishes, and at the second step of the campaign mode, you have a basic base that you can build onto and upgrade. As the UNSC, you can build a hand full of add-ons, including reactors for power, air pads to receive supplies, upgrade buildings, and of course, barracks or vehicle depots.

Depending on how much power you have, or what you have unlocked, you will also be able to upgrade your units and abilities as you expand your base.

Gathering resources, which are of course required to build or train units, is simple for either side. Supplies can either be found in crates on the battle field, or build units on your base which constantly gather resources.

Aside from that, each environment is filled with extras like sniper platforms, resource generators, additional building locations for more bases, and of course, an enemy looking for ways to wipe you off the map.

Next, there’s the question of what you need to build. In the third act of the demo there is a limit of 30 men, which can be increased with one upgrade to 40. Each unit you build or train is assigned a value that will eat away at that limit, so your Marine Squad might only count for one man, while a tank might be worth three men.

As fans of the Halo franchise can expect, a lot of the vehicles and weapons we have come to love and adore do make appearances in the game. Right away you can pop out a few Warthogs and watch them rip through the Covenant minions. Later on, you can deploy a Scorpion, or see if you can get one of your SPARTAN-IIs to take over an enemy vehicle.

The big upgrade though is getting access to a few superior weapons, in the form of Shortsword bombers, or a healing/repairing effect. Standing out from the pack is requesting gun support from The Spirit of Fire, which can fire off a MAC (Magnetic Accelerator Cannon) Blast at any target you choose. The effects are absolutely devastating, bringing down anything in the line of fire. 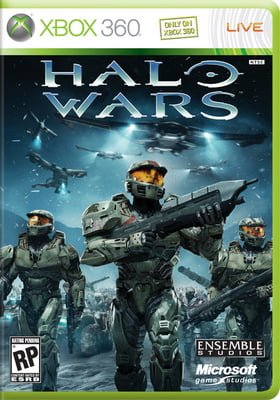 I would be negligent though if I didn’t mention that you can try out playing as the Covenant if you fire up the skirmish mode. During the Halo Wars campaign demo, you can only play as the UNSC, but in skirmish mode you get a quick sample of what else you will see in the game.

Playing as the Covenant is definitely quite a bit different from the rhythm you find playing as UNSC, and offers an abruptly different style of gameplay. The Covenant units and abilities work similarly, but are still radically different, right down to the weaker structures protected by force shield projectors, not to mention the fact that you can build the gigantic army-killers known as Scarabs.

As a first-taste, the demo for Halo Wars answers a lot of questions and opens the door for a lot of challenges and add-ons. I would have liked to see more in the demo, including a sample level from the perspective of the Covenant, but with only a month to go before launch, this is obviously still a must-download experience to get you primed for the full game.

My only concern coming out of the demo is that we haven’t seen the full extent to which we can customize bases, or expand. As it stands, that is the only disappointing element in the demo, since bases are limited to a specific number of slots, and defences are limited to the units you can build, and four gun turrets. Not exactly mind-blowing, but it is a good start.

Visit www.xbox.com/halowars for more on the game.