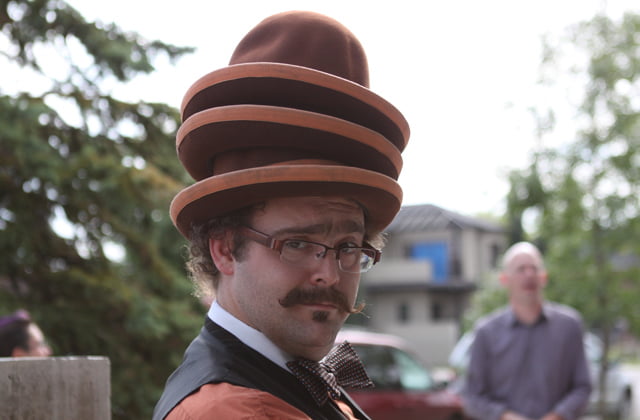 The Calgary Fringe Festival is mostly an indoor event with performances in local theatres, churches, art galleries and other spaces. This year that is not the case. Taking place in conjunction to the Fringe Festival is the Calgary International Street Theatre Festival. Performances including knife throwing, juggling and acrobatics will be taking place throughout Inglewood (where the Fringe is held) and downtown Calgary over the course of the festival.

It includes performances by:

I spoke with James Jordan the performer and artist director who is spearheading the Street Theatre Festival outside of Festival Hall while a cacophony of juggling and other feats took place beside us about his act and the impetus for the festival.

Question: Do you want to tell me about your show?

James Jordan: “I do a magic show for lack of a better term. I do magic and juggling and comedy and whip cracking and fire eating but I call it a magic show because that’s what people understand.”

Question: And you have a lot of hats.

James Jordan: “I do–that’s my juggling prop. I like to juggle organic things. I never really found that juggling clubs or juggling balls were organic. They didn’t fit with the show, the situation that we’re all in but hats do, canes work, organic juggling props is what I like to work with.”

Question: How did you get into this?

James Jordan: “I got into street performing in probably the early ’90s when I saw all the street performers along Stephen Avenue Mall, the Three Canadians, Paul Isaac, Dan the One Man Band, Stephen Forester they were all local Calgarian street performers and so I thought I could contribute and then just as I started getting into it Stephen Avenue Mall said no buskers and they cancelled all the buskers and then so I moved to Eau Claire Market and started doing my stuff there but I’ve been a busker in Calgary for two decades now”

Question: So are you born and raised in Calgary?

James Jordan: “Born and raised. I think that if I can find six other people born and raised in Calgary we’d get our own float in the Stampede parade. True story.”

Question: Do find that Eau Claire is a difficult to be a street performer?

James Jordan: “Not at all. Eau Claire actually, the Eau Claire Market isn’t necessarily where I perform, where I perform is mostly outdoors where the waterpark is and that waterpark is a great draw for kids and families and then just beside it is a amphitheatre where I put my show up and it’s actually a place that’s meant for street performance.”

“The street theatre festival is sort of my project. These are all people that I brought in. I run a monthly vaudeville cabaret in Calgary as well. During the summer we move out of the theatre and into the streets and I bring in the same acts that I bring in for the vaudeville cabaret and I put them on the street for street festivals because those are all my friends, they’re all street performers.”