Romero’s ‘Diary of the Dead’ at Midnight Madness 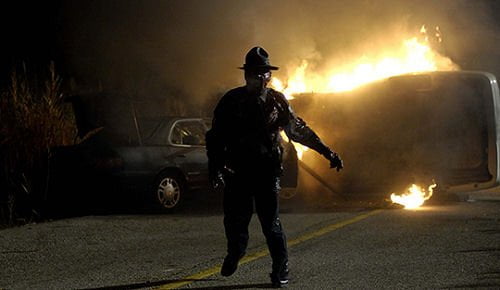 George A. Romero’s Diary of the Dead

Great horror films, and top thrillers, have been unspooling at the Toronto International Film Festival’s Midnight Madness for the past twenty years. Since 2003 alone moviegoers have enjoyed cult classics like Bubba Ho-Tep, Borat, Hostel, and Underworld, to name a few. And this year at the 2007 Midnight Madness ten new films, including George A. Romero‘s Diary of the Dead, will make their debut.

Romero’s Diary of the Dead, which is probably the most hotly anticiapted film during Midnight Madness, returns us to a night of horror as the dead rise again to torment a group of film students making a horror film in the woods. Told with a real-life focus, the film returns fans to the heart of Romero’s classic horror series.

Famed Italian director Dario Argento brings his film The Mother of Tears to this year’s festival. Continuing his Three Mothers trilogy, which includes Suspiria and Inferno, the latest film stars Asia Argento as Sarah, who mistakenly releases demonic forces into the world and must find a way to save mankind from The Age of Witches.

Director Adam Mason‘s The Devil’s Chair follows a group who venture into an insane asylum to uncover the truth about an alleged murderer and has been dubbed a supernatural rollercoaster that deals with a blood-drenched secret.

Writer/director Stuart Gordon brings us Stuck, his chilling retelling of the true-life inspired story about a hit-and-run victim held captive by his attacker. Mena Suvari stars as Brandi, who decides that after she hits a man on the street, played by Stephen Rea, she would rather leave him to die in her garage than take him to a hospital and accept blame for the accident.

In the animated Vexille, by Fumihiko Sori, a futuristic Japan is sealed off from thw world and is being destroyed by a mega-corporation that has unleashed monstrous, android worms. It’s up to a U.S. Special Forces unit to infiltrate the country and discover exactly what is going on within the devastated country. Stars the voices of Meisa Kuroki, Shosuke Tanihara, Yasuko Matsuyuki, Takahiro Sakurai and Romi Pak.

Other films at Midnight Madness include Dainipponjin by Hitoshi Matsumoto, about an unlikely superhero; Flash Point by Wilson Yip, a high-octane action film about a cop duo fighting against a ruthless gang; FrontiÃ¨res, by Xavier Gens, in which a gang escapes a riotous Paris only to find themselves among neo-Nazi fanatics in an old, Gothic home; Ã€ L’interieur, by Julien Maury and Alexandre Bustillo, a thriller about a woman who must defend her baby from a strange woman following the death of her husband; and Sukiyaki Western Django, by Takashi Miike, an Americana-Kabuki-baroque tale that drops Buddhist temples amidst saloons, samurai swords, and gun slingers.

For full festival details head over to www.tiff07.ca. The Midnight Madness Package is $156.51 ($100 for students and seniors) and includes tickets to each screenings. Stay tuned to The GATE for ongoing coverage from the 32nd TIFF which runs from September 6 – 15.