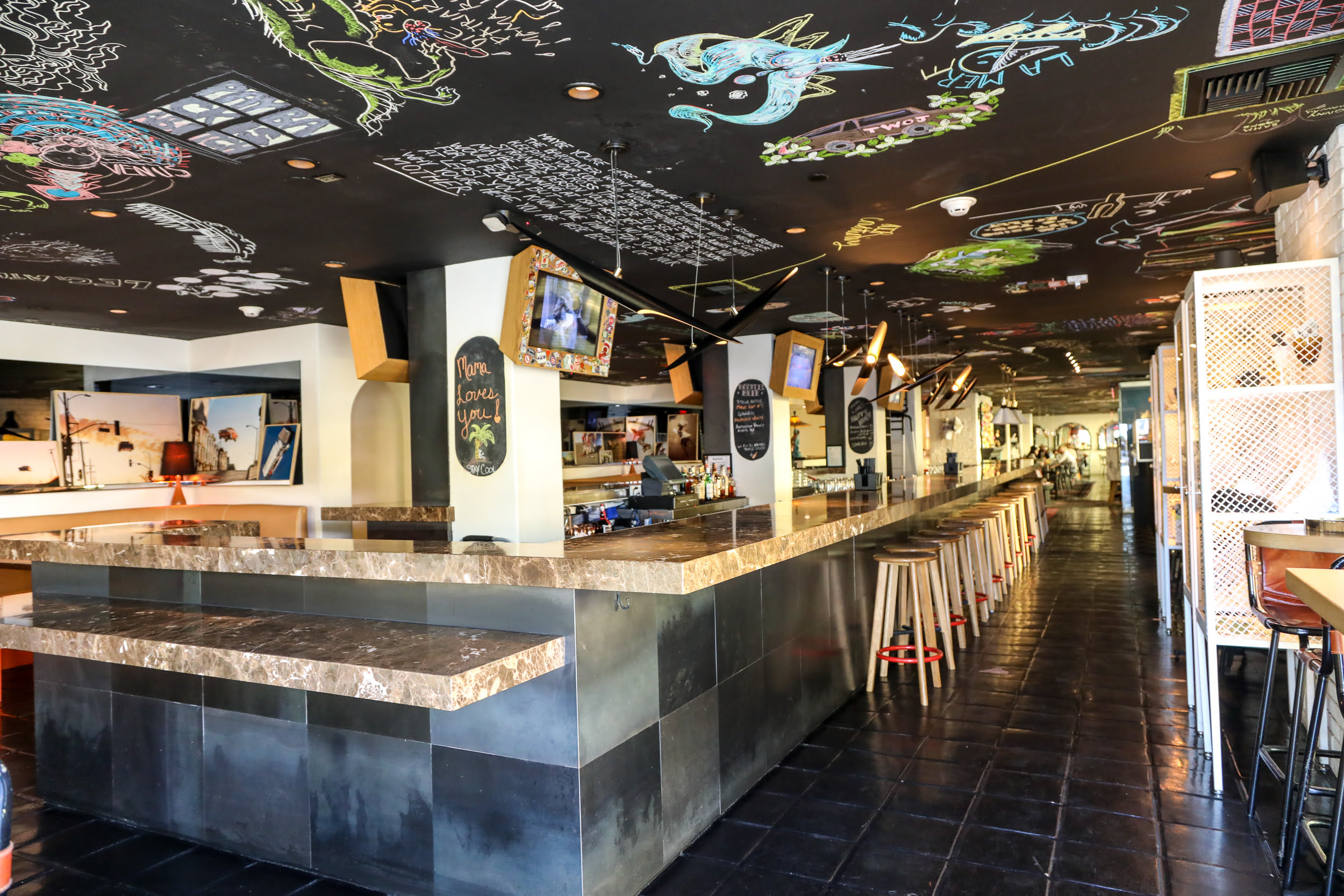 Often my discoveries of cool new hotels come as a part of a larger or much different purpose for my actually being there. Sometimes a cool interview with an actor or director brings me to their favourite hotels which then gives me the opportunity to explore and develop an appreciation for that hotel independently and sometimes it is a special occasion that is either specific to the hotel or specifically related to the hotel.

Such was the case recently with the Mama Shelter in Los Angeles, a relatively new hotel that is the first Mama Shelter in North America. How I ended up there was simple–I was invited to attend the Hamilton Behind the Camera Awards in Los Angeles by Hamilton Watches. These awards highlight those who toil behind the scenes and are rarely celebrated with this type of ceremony.

Hamilton Watches and Hollywood have been closely associated since 1951 when the first Hamilton watch appeared on screen in the film Frogman. Since then Hamilton watches have either appeared in or have been designed for over 450 movies and TV shows. Hamilton’s lavish Behind the Camera Awards was held at the Exchange LA, the old Los Angeles Stock Exchange Building in downtown Los Angeles, and the presenters included Denzel Washington, Amy Adams, Mark Wahlberg, Peter Berg, Mel Gibson, and Peter Bogdanovich.

I was based at the Mama Shelter for the four days surrounding this event because Hamilton had commandeered the entire 70 room hotel for the invited guests.

Mama Shelter is a small France-based chain created by Benjamin Trigano, an art gallery owner and grandson of one of the guys who created Club Med. Most of the Mama Shelter hotels are in France–Paris, Marseilles, Lyon, Bordeaux, Lille, Toulouse, with new properties in Rio and Istanbul recently added to the roster–and they are purposefully located in some of the less than chic areas of the cities they are based in with the philosophy being these cool boutique hotels will create a scene, thus making it cool to go there.

The Mama Shelter in Los Angeles is also based in such an area–the area most know as Hollywood, 6500 Selma Ave. at Wilcox Ave., between Sunset Blvd. and Hollywood Blvd. a few kilometers east of West Hollywood and just a couple blocks from all the touristy action of Grauman’s Chinese Theatre and the Walk of Fame, and it was built in to the old Hotel Wilcox building that had been there since 1930. 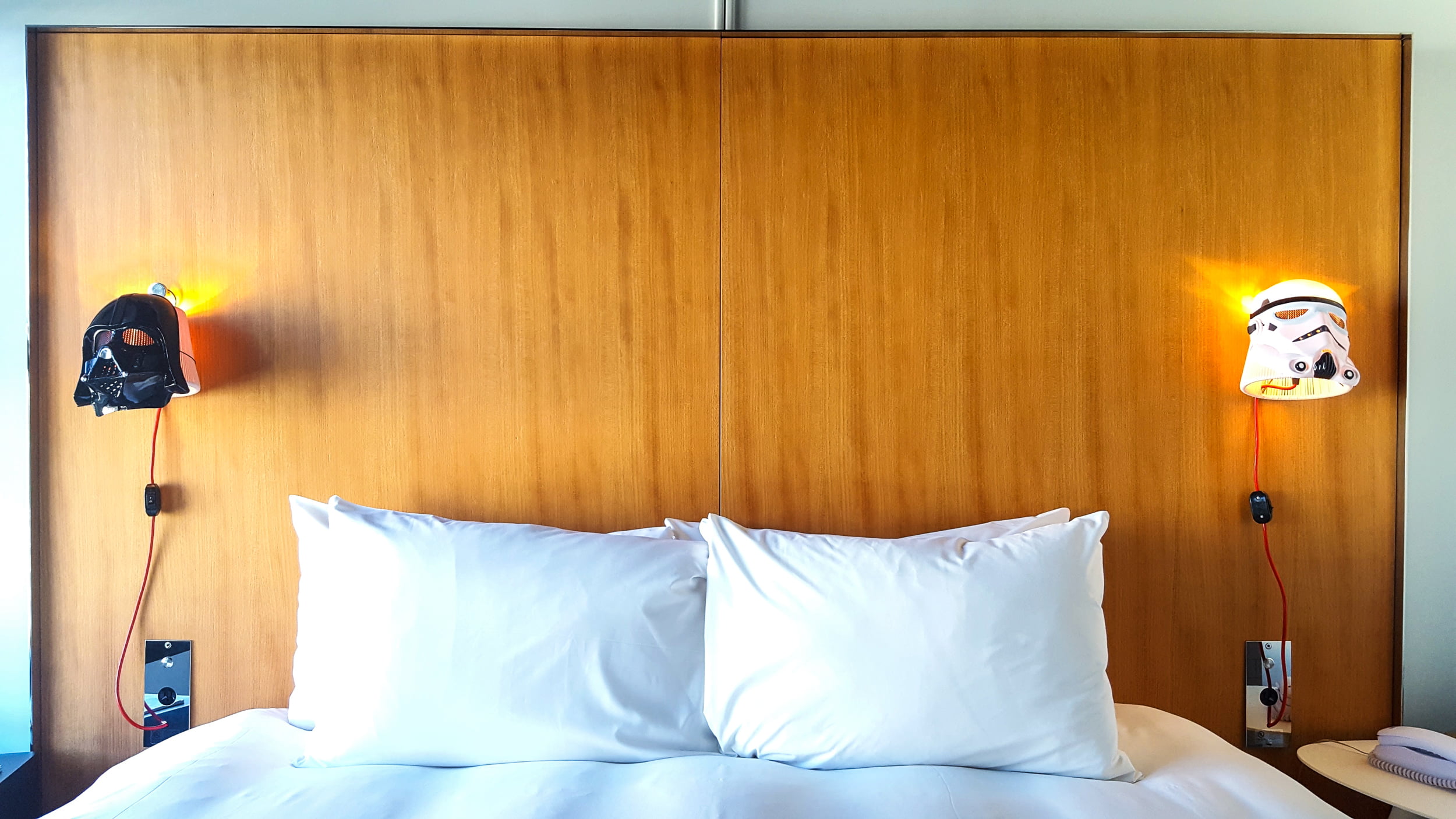 In terms of the rooms, they are bare-bones at first glance but there are a bunch of little touches in each room that make them so much fun that you end up focusing on the fun stuff and not the fact that there are no closets.

For instance, in each room on the bedside table is a Gideon Bible of course, and a copy of Keith Richard’s autobiography. On the desk next to the Apple computer/TV in each room is a copy of a real movie screenplay, titles such as Big Lebowski and Pulp Fiction.

During my stay the screenplay in my room was the excellent Jonathan Nolan screenplay Interstellar because of the fact that Hamilton Watch had designed a couple watches for that film.

On the bedposts in each room are colourful masks–currently Darth Vader and a Stormtrooper. The Apple computer/TV comes with Netflix loaded among many diverse channels. The bed was large and comfortable and the bathroom was perfectly sized for the size of the room.

The long lobby of the hotel has a bar and a restaurant divided by a very small reception area and one small elevator–the lobby also contains lots of quirky little touches like an oversized Foosball game, piles of vintage MAD magazines and a table filled with Hollywood themed books for borrowing during your stay. All of the food I sampled during my stay was very good.

What the Mama Shelter Los Angeles boasts as a main attraction is a rooftop lounge that is second to none. It is the biggest and most comfortable rooftop lounge I have ever enjoyed hanging out in, and I am not alone in that opinion–Vogue magazine named this rooftop lounge as one of the six chicest rooftop lounges in the world. This particular rooftop lounge covers the entire roof and has a large bar, many bed-sized lounge chairs, games, free weights, a screen for showing movies and is edged with tables and chairs that afford guests views of the city of Los Angeles on one side and the Hollywood Hills on the other. Before the rooftop opens as a lounge each afternoon it is a yoga studio in the morning.

The Mama Shelter Los Angeles is a fun little boutique hotel slightly off the beaten path where most cool LA hotels are found, the West Hollywood/Beverly Hills area, but that said, the view from my window each morning consisted of lovely tall palm trees, a fantastic old Hollywood art deco building (a US Postal Service Office) and another little hotel with an old neon sign identifying it as the Hotel Mark Twain. A member of the very friendly staff of the hotel said the hotel was a mixture of “French chic and So-Cal cool in just the right combo,” – that sounds about right to me. This is a Los Angeles hotel I will most certainly be making a return visit to. 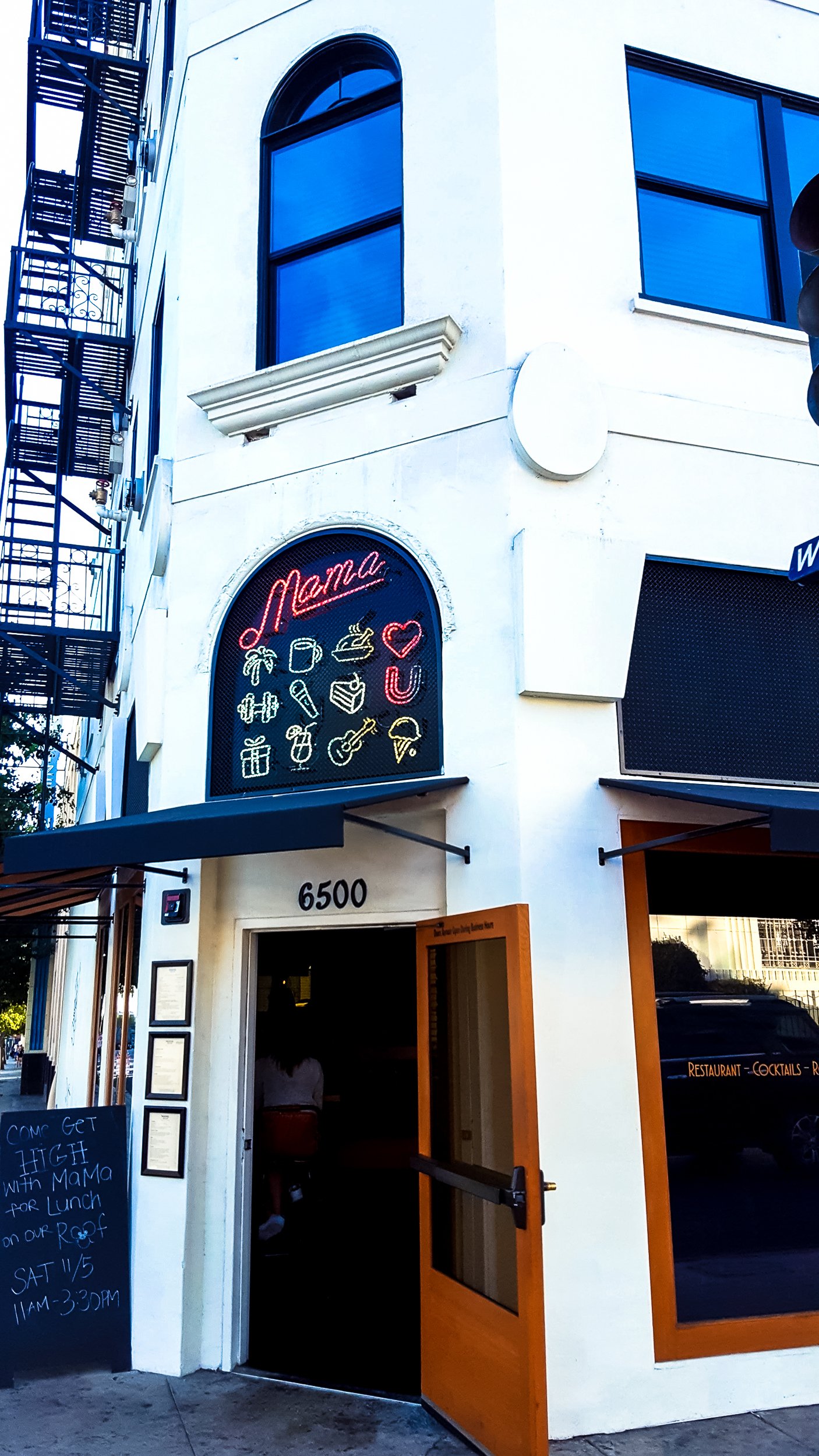 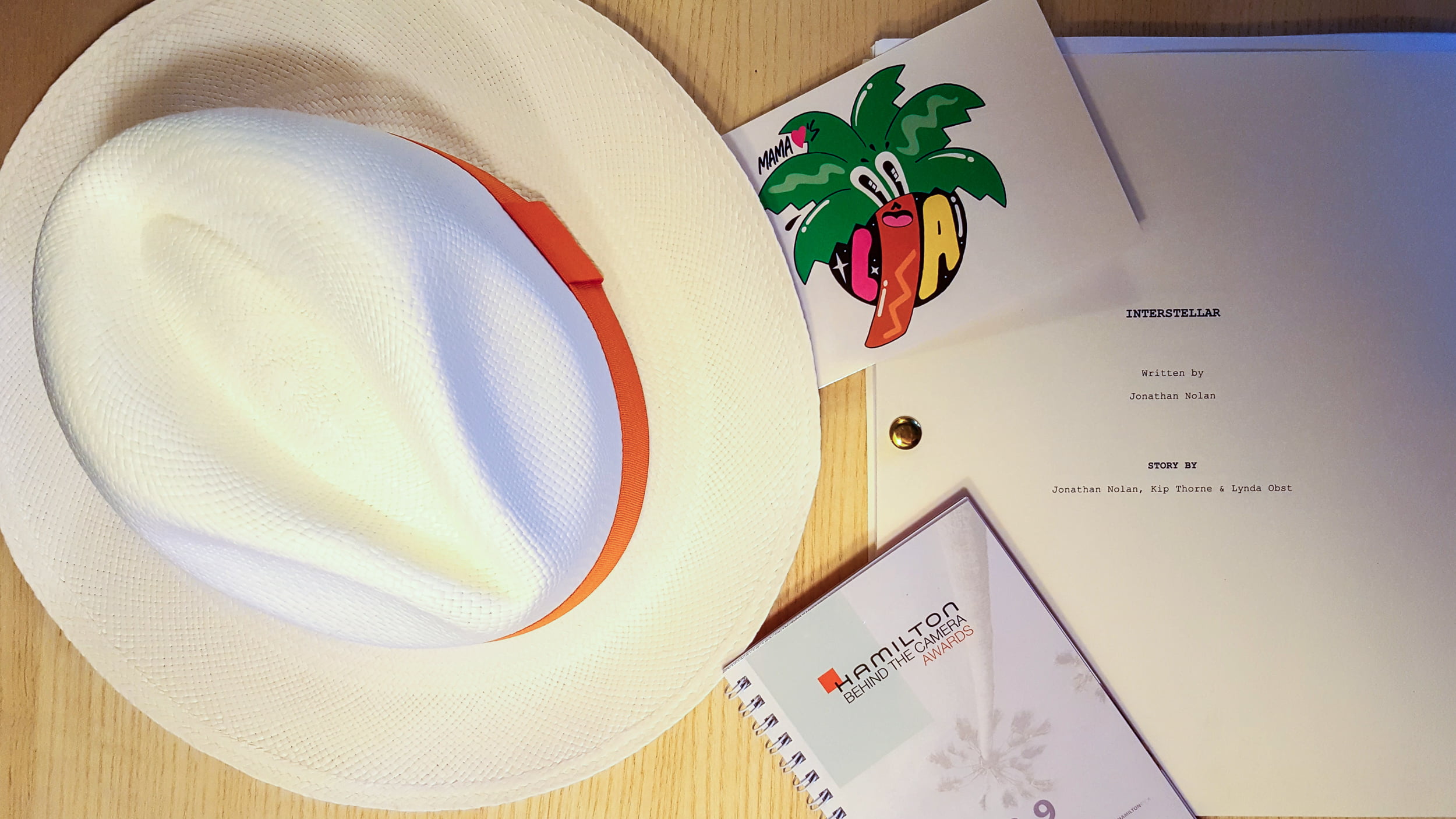 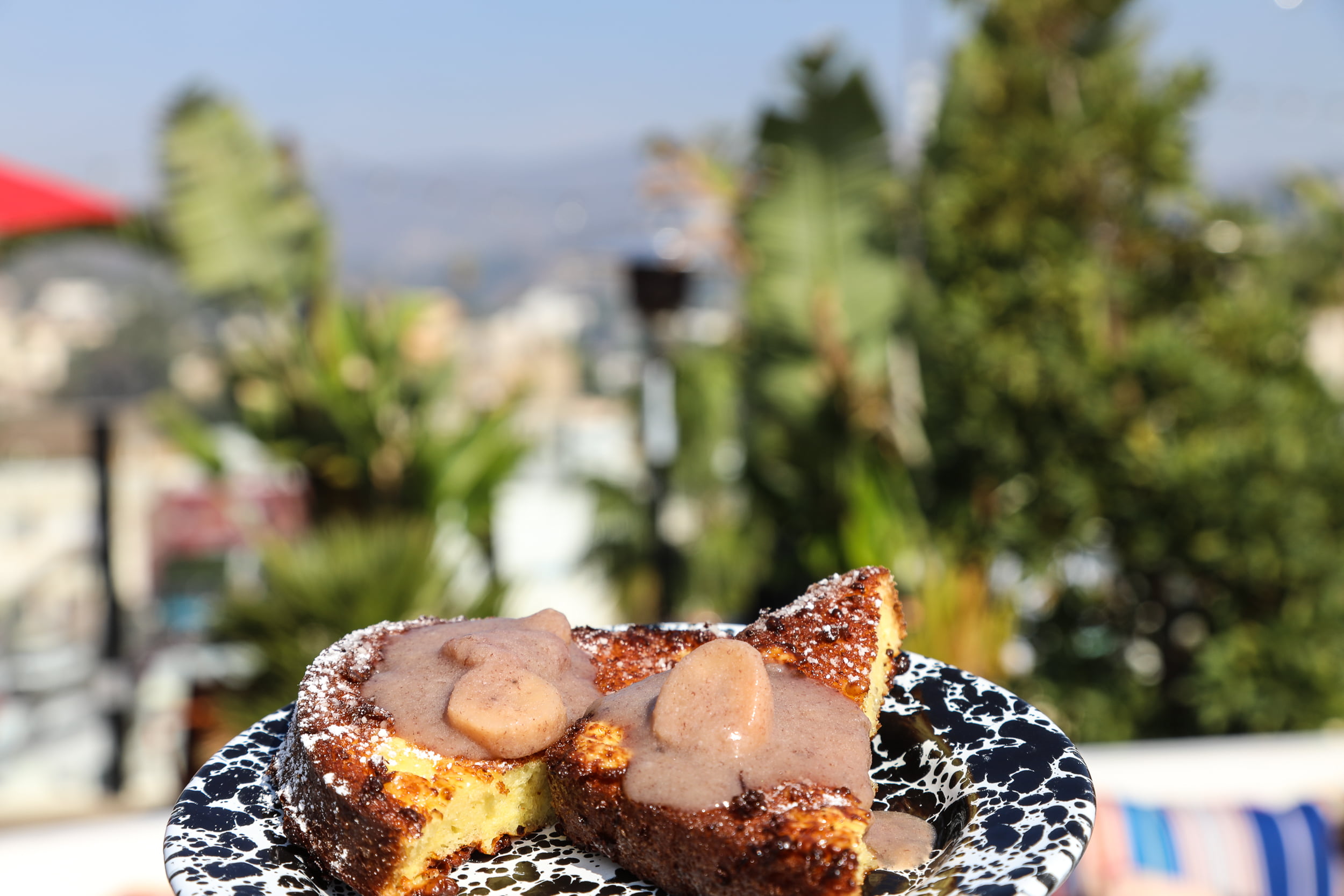 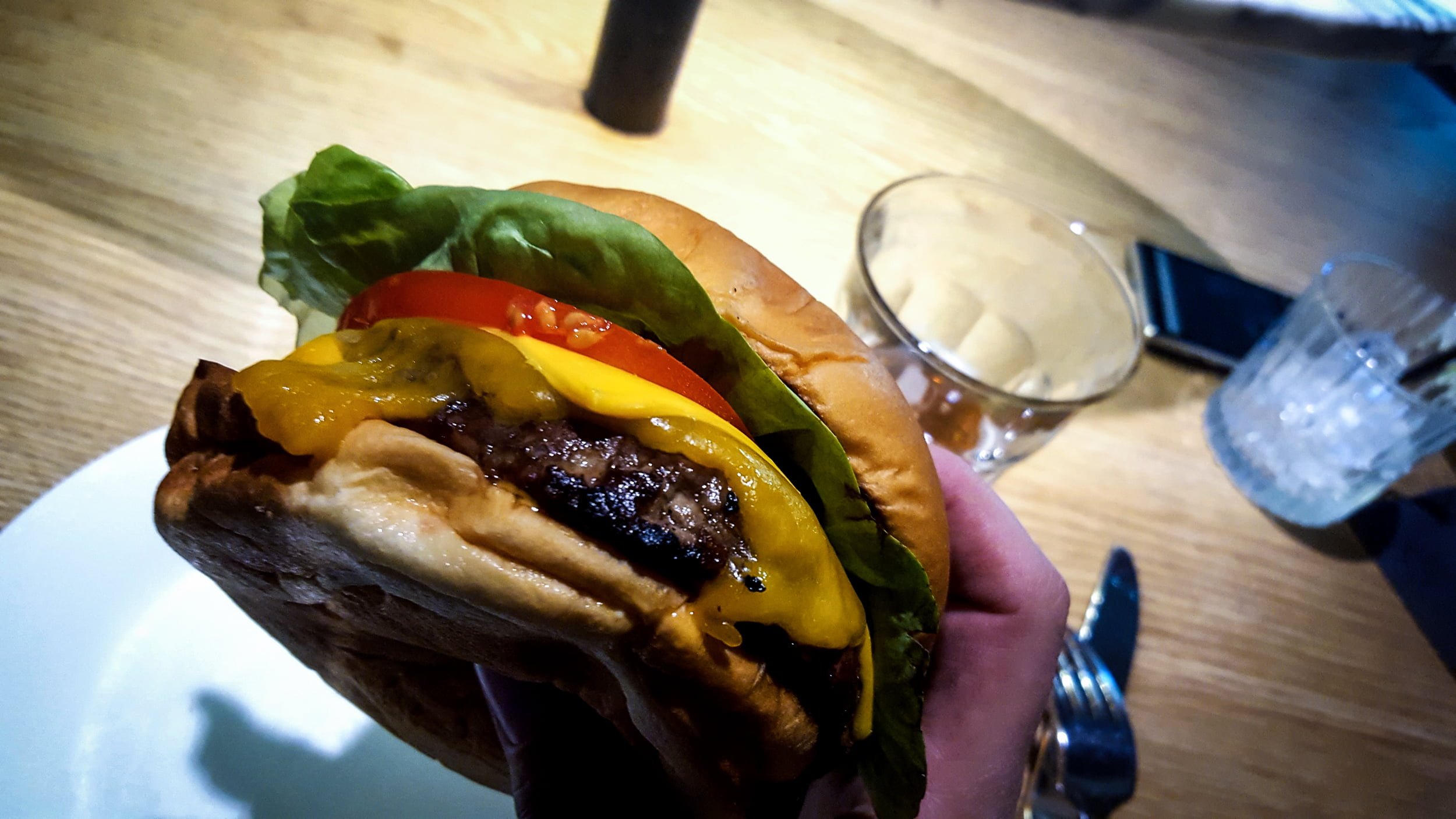 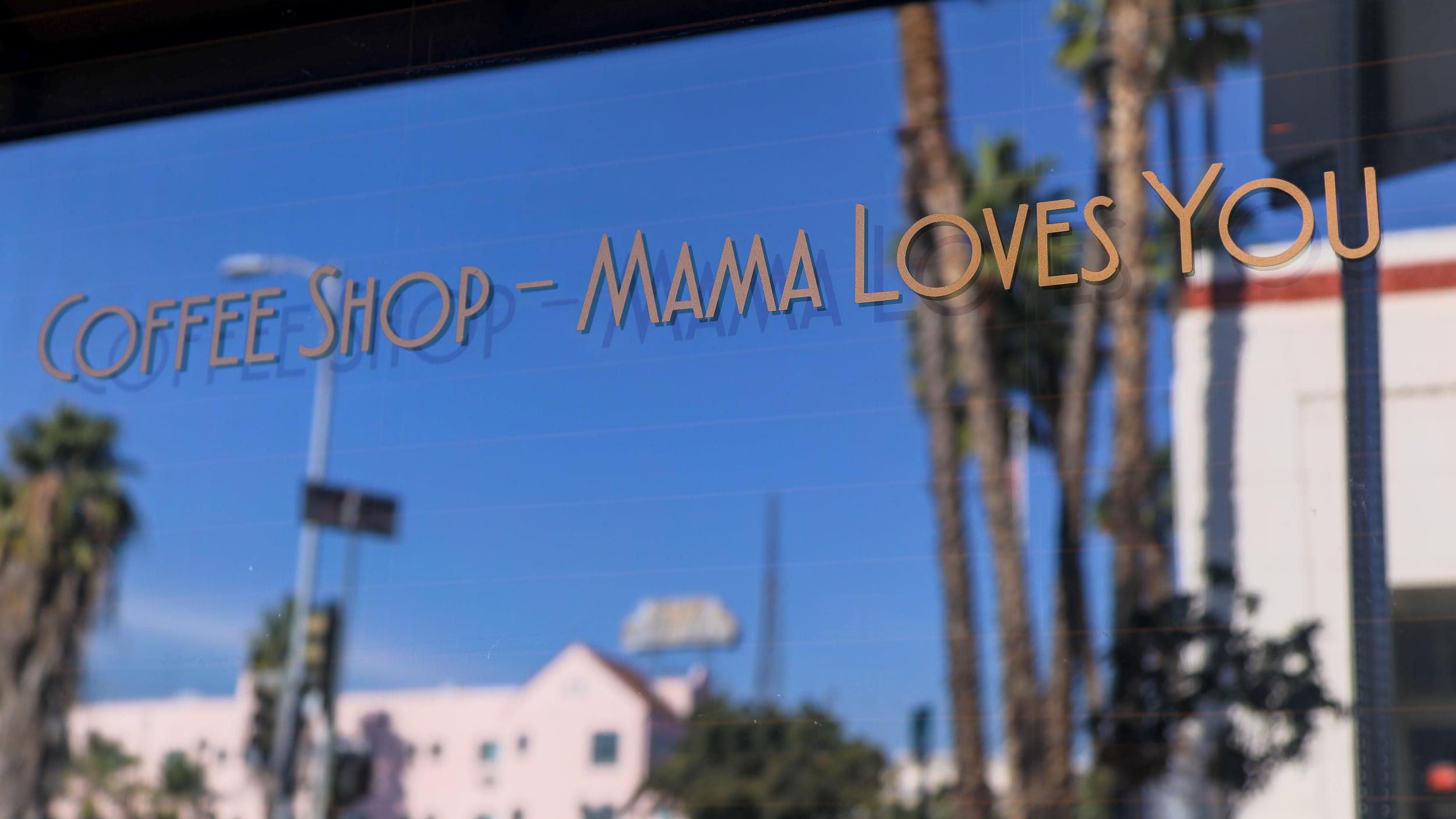 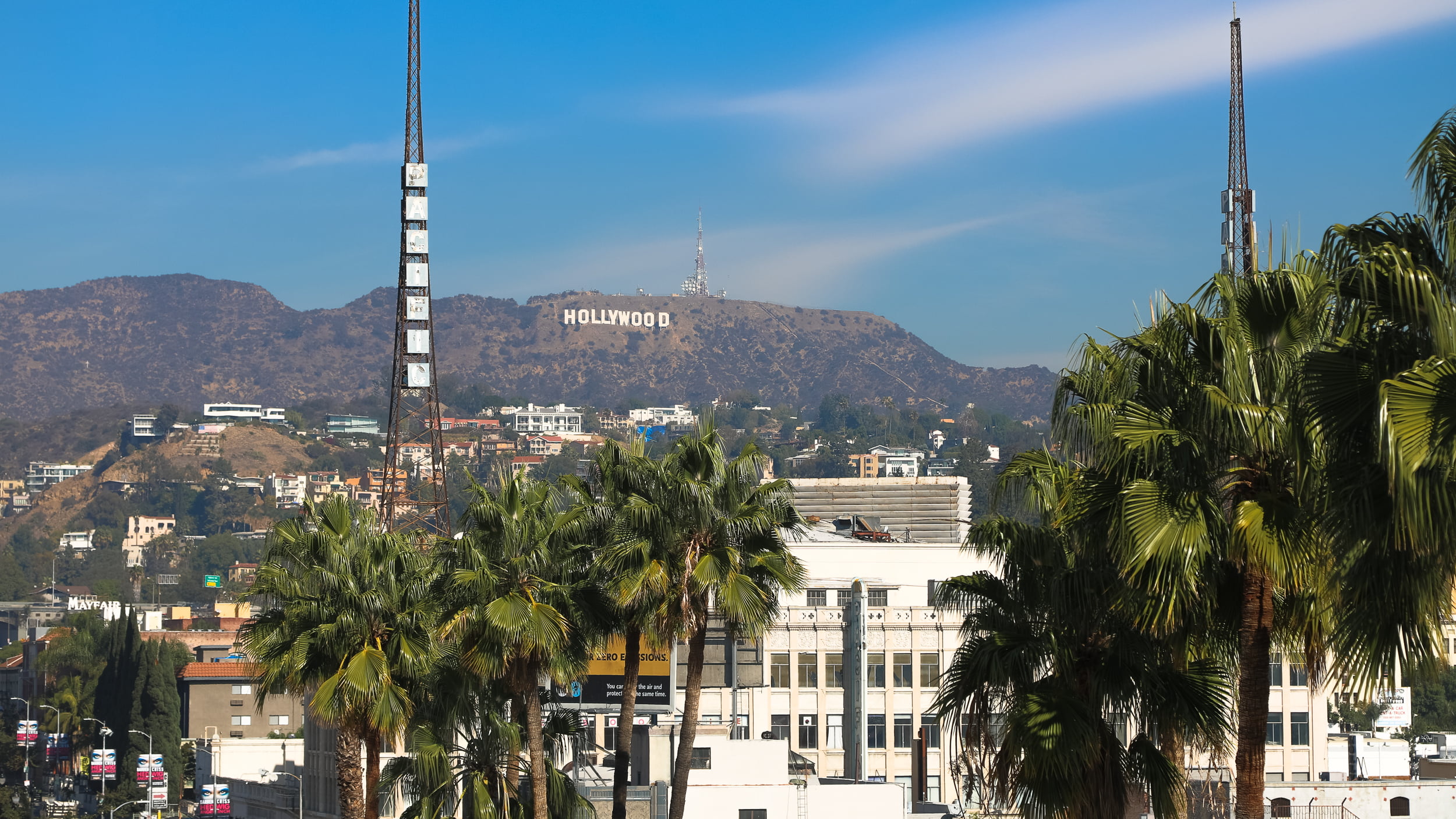 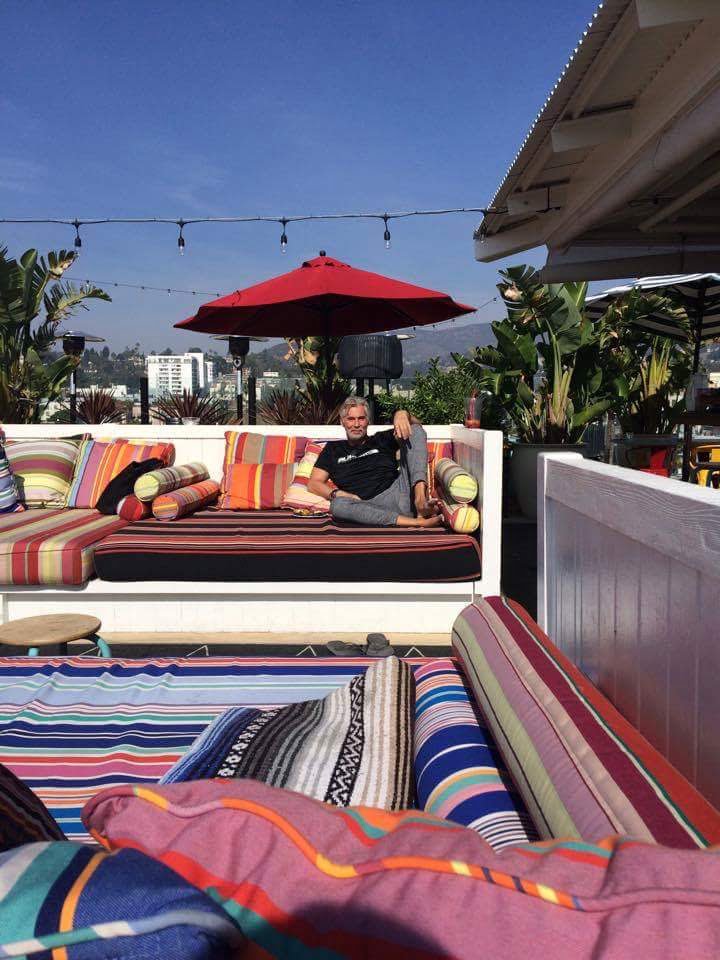 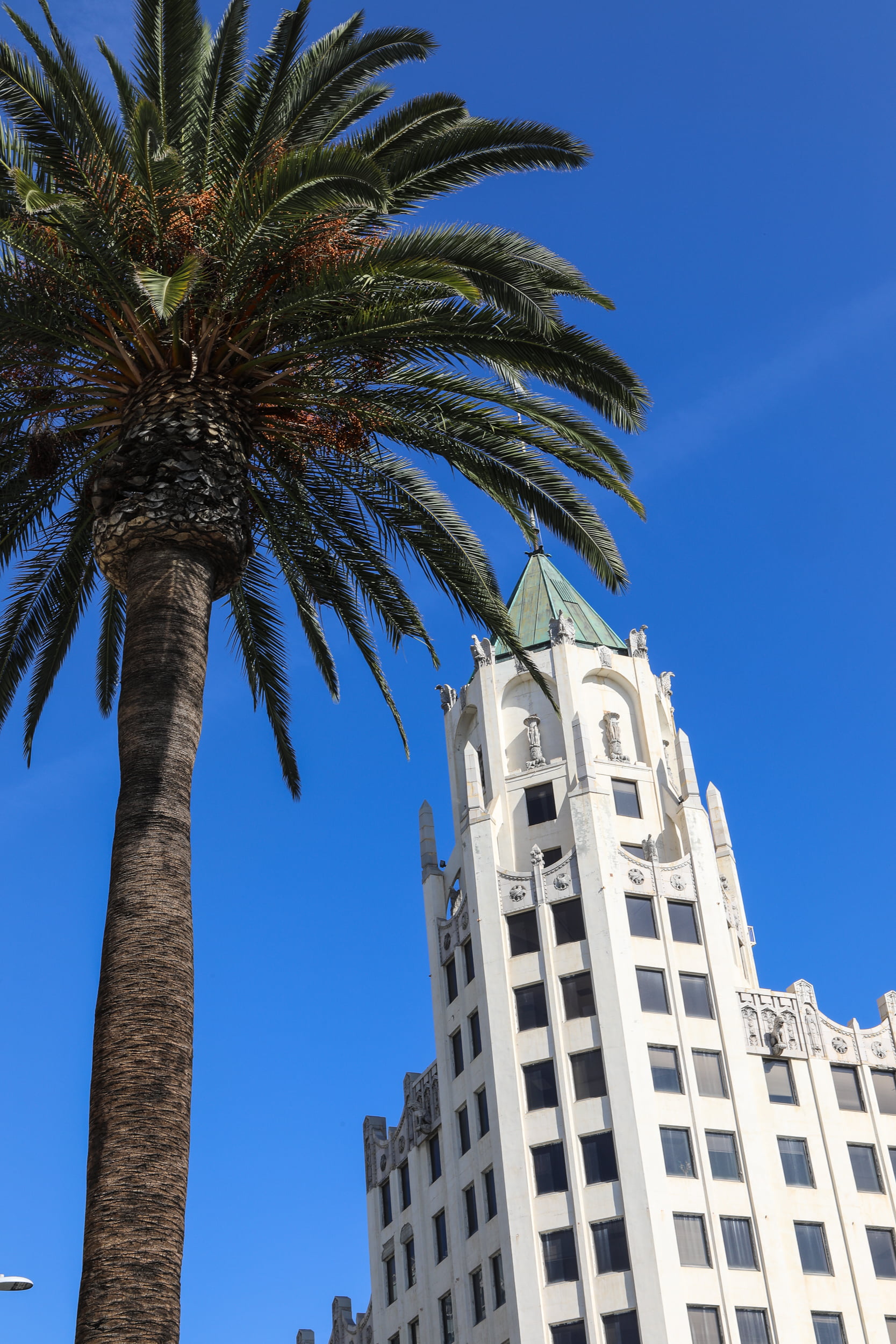 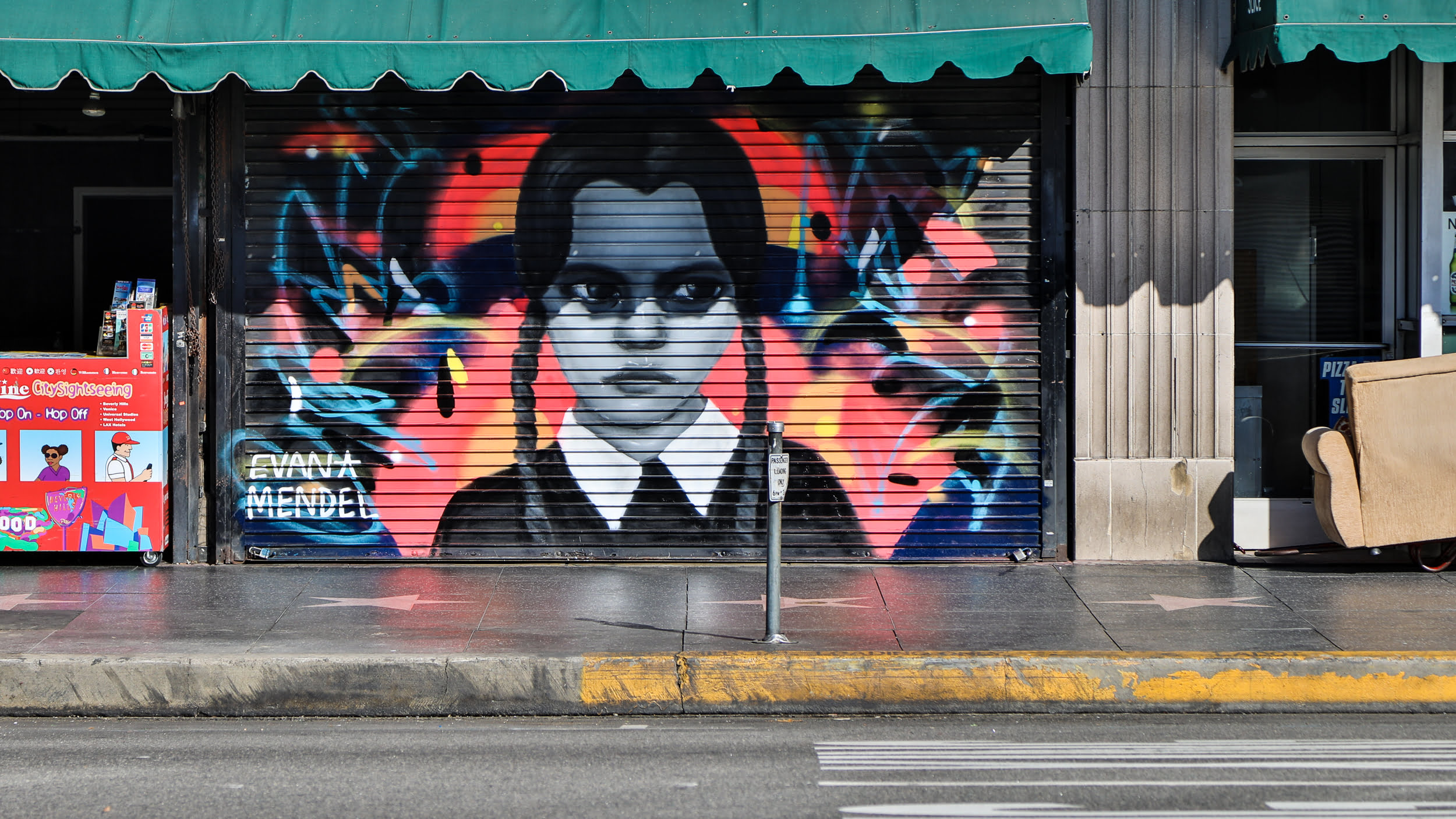 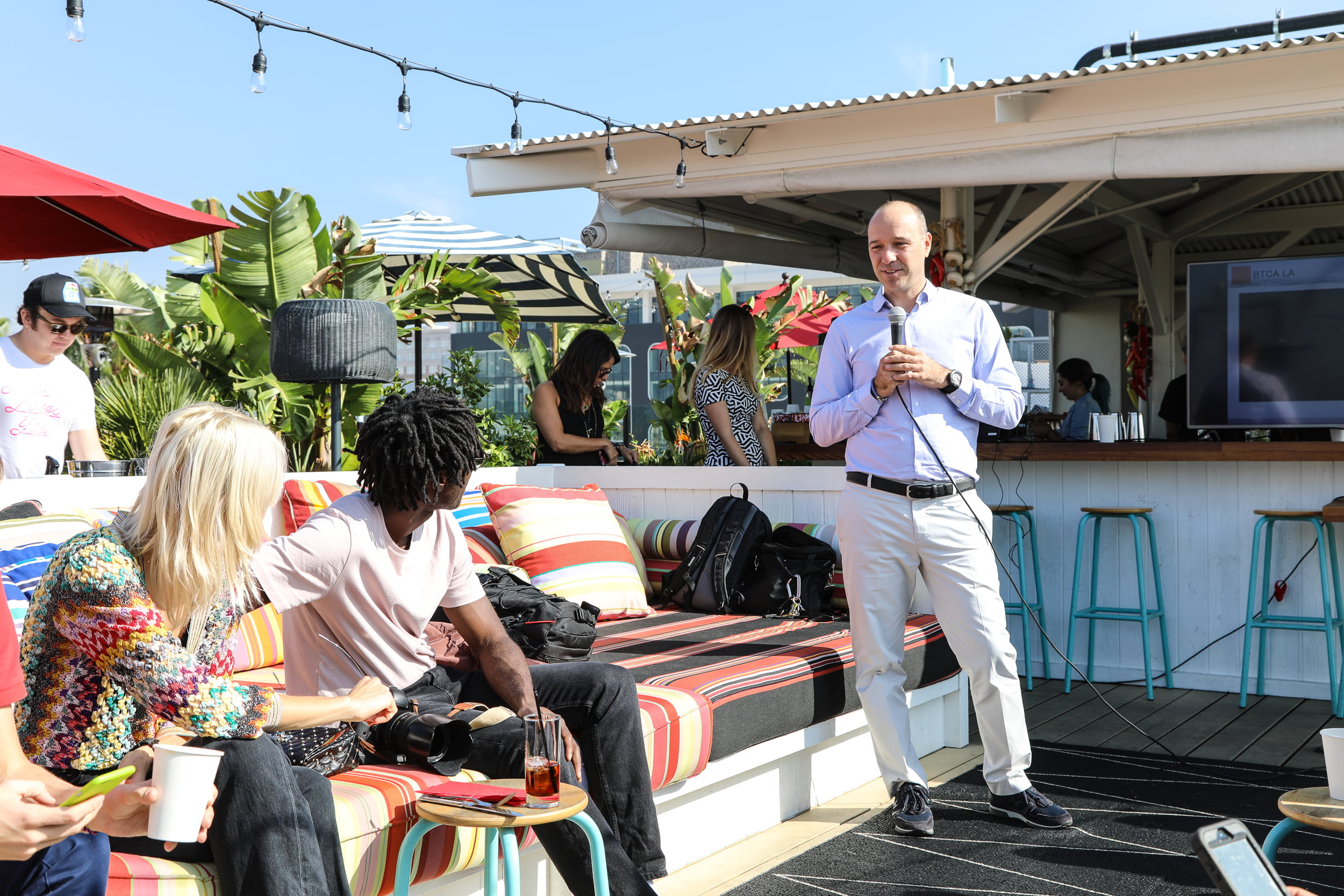 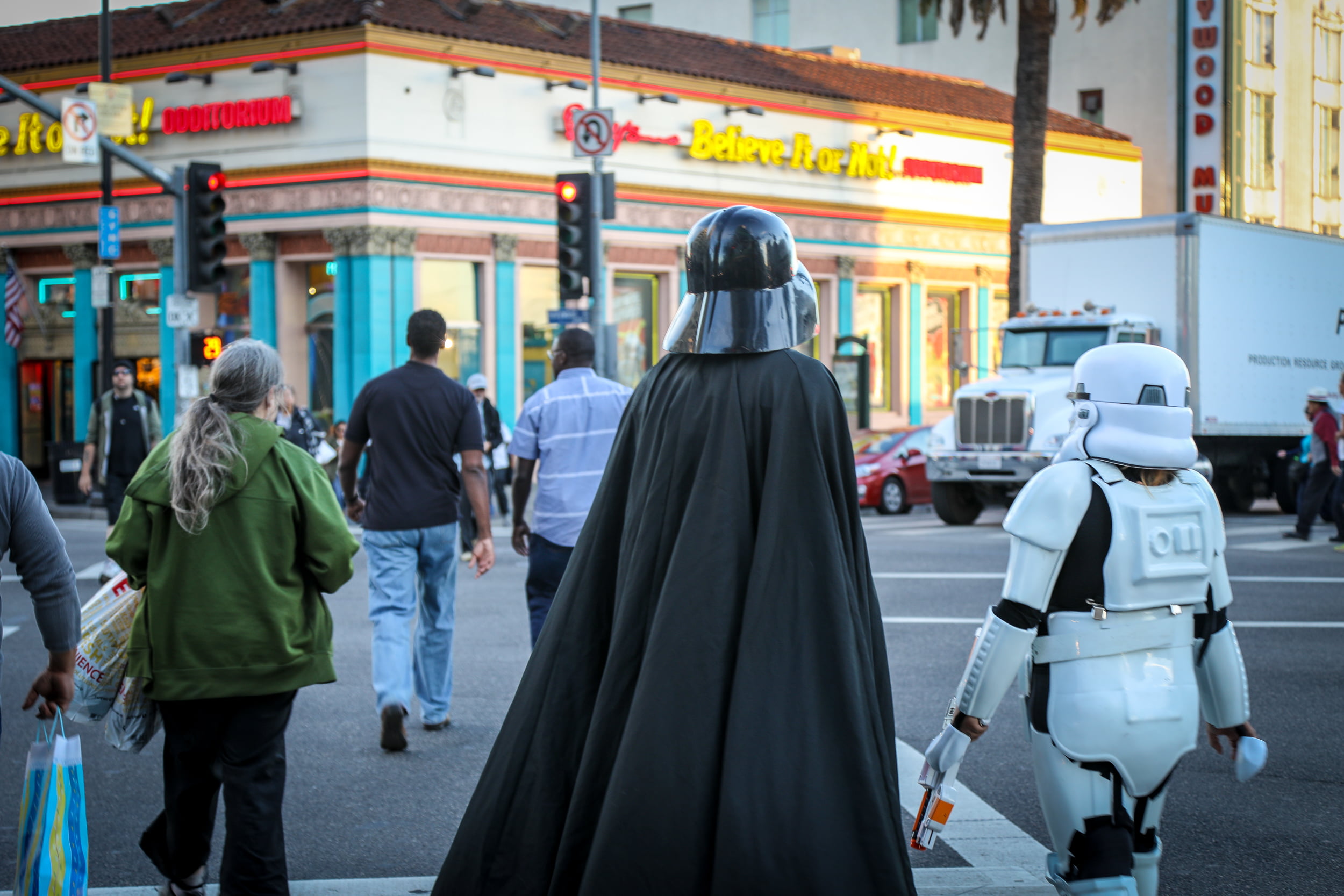 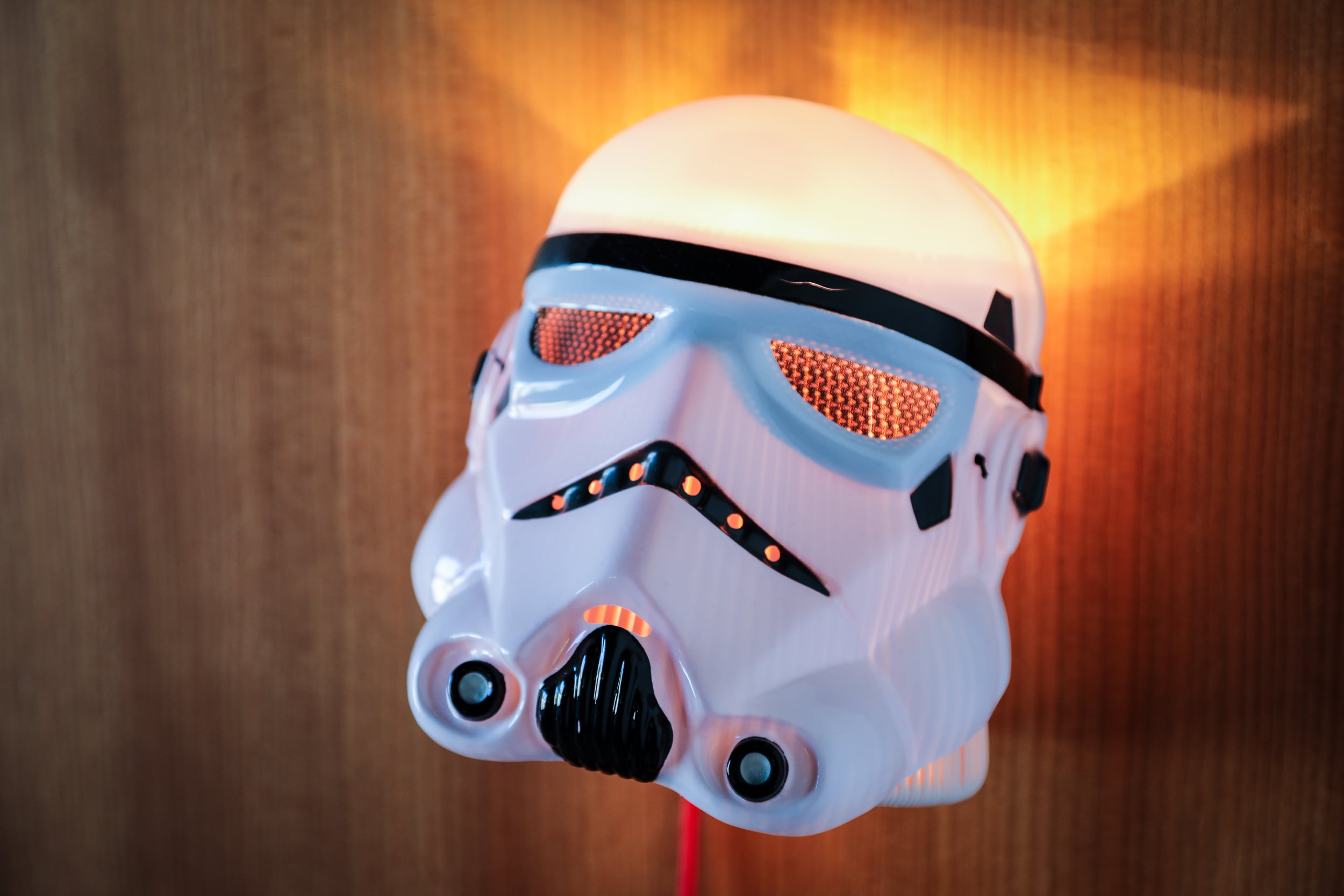