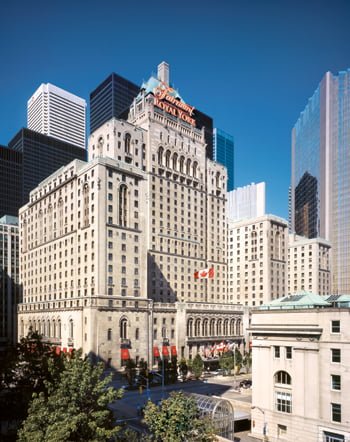 The 2009 edition of the Toronto International Film Festival, or TIFF as it is now called officially, has come to a close and this year the Fairmont Royal York played host to some serious TIFF action. You knew something wonderful was happening here as soon as you walked through the front doors end entered the lobby, a wonderful poster welcoming TIFF participants greeted you. The poster, another touch of brilliance courtesy of the film and TV person here at the Royal York, Kolene Elliott, was a very faithful recreation of the poster for The Wizard of Oz only it wasn’t Oz at the end of the yellow brick road, it was the Royal York. And it just got better from there.

So for several days as you walked through the lobby you would be apt to run into the likes of Matt Damon, director Steven Soderbergh, Jennifer Garner, Scott Bakula, Rob Lowe, and many others. In fact I rode the elevator with Rob Lowe one afternoon and as we chatted I mentioned that I was actually conceived in this hotel, he looked at me with a smile and said, “And you just never left, huh?” To which I responded, “Yeah, something like that.” During the press conference for his film The Invention of Lying, Lowe’s co-star, director and writer Ricky Gervais was the first person to arrive at the press conference for the film in the Imperial Room – Rob Lowe and Jennifer Garner were late. Gervais, as is his wont, said to the press gathering that perhaps they should all start without Lowe and Garner – then, when they do arrive everyone should look at them then point to their watches.

One evening during TIFF I ran into the fantastic Irish actor Brendan Gleeson in the lobby – he was heading out for dinner with fellow Irish lads Cillian Murphy and Colin Farrell. I mentioned that this hotel was a favorite of The Queen. Gleeson smiled and said, “Aye, you’ll have to let me know next time she is about, I’d love to meet here.”

Australian filmmaker Jane Campion (The Piano) brought here film Bright Star to the film festival and the Royal York. I spoke to her in the lobby as she waited for her star Ben Whishaw (who plays doomed poet John Keats in the film) to join her for a festival event. She mentioned that everyone in the hotel was so friendly and accommodating – I explained to her that the Royal York specializes in being good to filmmakers and mentioned some of the big films shot here – they her John Keats arrived and our conversations was cut short. That is the thing about TIFF – it is all action, all the time, if you are talking to someone, you better keep it short and talk fast because everyone is always on their way to dinner, a screening, a premiere or an interview.

And while the big stars were certainly easy to spot here there was also a lot more TIFFing going on. Any night during the festival if you were to stop by Epic for a late salad or a drink, you would see young filmmakers from all over the world huddled with distributors and press people trying to drum up interest in their films. You would see producers and actors talking about upcoming film projects both had in the works. And as the TIFF readies for its move south, when their giant new headquarters, the Lightbox on the corner of John St. and King St. opens, you can be sure that the Fairmont Royal York will be seeing more and more of the TIFF action in the coming years.

In closing, a non-TIFF bit of magic. The Saturday TIFF ended, my beautiful little daughter Isabelle was in town for a visit, she is three-years-old and loves the Royal York as well. She loves the spacious lobby and loves running wide hallways on the mezzanine floor just like Eloise does in The Plaza.

On this particular sunny Saturday Isabelle and I were playing in the lobby – she climbed the steps towards the Imperial Room and asked me what was on the other side of those ornate door. I told her we should take a look. The Imperial Room was empty and quiet, so we quietly went in for a look around. She was dazzled, as I have often been, with the chandeliers and the space and the high ceilings and the drapes. I told her that the Imperial Room was a grand hall where people come to sing and dance.

I lifted her onto the stage – that venerable stage that has graced the likes of Tony Bennett, Buddy Rich, even Marlene Dietrich. I told her she could dance if she wanted to. So my little daughter took centre stage at the Imperial Room and twirled and jumped and skipped. I took a seat at a front row table where so many dandies had sat with their dates over the last eight decades watching every major lounge act that lived during the last century. I sat there beaming with pride as beautiful little Isabelle made her stage debut on that very Imperial Room stage all alone. But was I alone in the audience? No, I think not, there were spirits presents, eighty years worth of smiles that beamed uncontrollably in that room, eighty years of applause and cheers. Was little Isabelle alone on that stage? Most certainly not, there was Peggy Lee urging her on, there was Marlene Dietrich telling her to sing out, and sing out she did – Isabelle began singing our favorite song from Cat In The Hat – “Cat, hat, in French chat chapeau, in Spanish you’re el gato in a sombrero…”

After Isabelle made her stage debut at the Fairmont Royal York’s Imperial Room we were strolling over to The Old Spaghetti Factory for spaghetti and meatballs. She looked back at the exterior of the Royal York and said, “It looks like a princess’s magical castle.” I could only respond to her by saying, “It is, Isabelle, it is.”