Christina Aguilera’s “Not Myself Tonight” 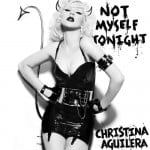 Leading up to the release of her brand new album, Christina Aguilera debuted her first single today, the steamy track, “Not Myself Tonight”.

Aguilera’s album, Bionic, will hit stores on June 8, and as reported by Billboard.com, the new album will feature collaborations with artists like Sia, Le Tigre, Christopher “Tricky” Stewart, Hill & Switch, and Ladytron.