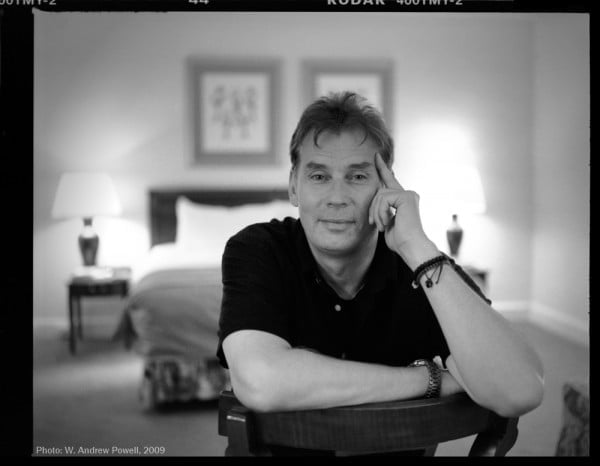 Kiefer Sutherland is easily one of Canada’s most well-known modern actors to ever take America by storm, and even though he’s lived the dream, he has happily proven that he really doesn’t care what people think of him. Call him a bad boy if you like, but in author Christopher Heard‘s new book, Kiefer Sutherland: Living Dangerously, we get a fresh look at one of the most interesting actors working in Hollywood today.

Heard, who authored six biographies to date, including Dreaming Aloud: The Life and Films of James Cameron, spent months researching Sutherland, and discovering some of the details that a lot of people might not know about the star.

Andrew Powell » What is the hardest part of being a biographer, in telling someone else’s story? And what was your favourite part of writing this book?

Christopher Heard » “The hardest part of being a biographer is in the fact that in today’s world, information is flying about everywhere — blogs, magazines, entertainment television shows — it is hard to distinguish between fact and fiction. Sometimes even the person I am writing about themselves send out false information about themselves to keep people at a distance — so there is the challenge of putting together a complicated puzzle while telling an entertaining story at the same time.”

“The best part is that I get to celebrate the life of someone I have watched and admired and share that admiration with others. Like it or not we live in a celebrity obsessed, celebrity driven society, so being able to go a few layers deeper and give people a better understanding of the people they are watching and wondering about is a lot of fun.”

AP » Kiefer Sutherland has had an interesting life, even among Hollywood stars, but did you learn anything that surprised even you?

CH » “I don’t think I learned anything that truly surprised me about Kiefer. There were aspects of his life that I knew about, but upon deeper investigation became very interesting and in turn explained a lot of the other things we known about him.”

“For example, the time he turned professional as a rodeo cowboy and roped on the U.S. Team Roping Championship circuit — he won a few events with his partner John English, whom he met when English doubled for him on The Cowboy Way, and broke several bones and was pretty beaten up during the time — I learned that Kiefer was not just an actor, he was a guy who could dedicate himself to whatever he chose to do — which in turn made him a better actor. When he stepped away from acting for a while, because the work wasn’t satisfying him, he realized how lucky he had been to work as an actor at all — so leaving acting helped him to reconnect to his career. A very bold move to make.”

AP » Do you have a favourite chapter, or a favourite fact that you discovered about Sutherland?

CH » “One of my favourite parts of the book was when I was dealing with the many collaborations between Kiefer Sutherland and Joel Schumacher — I have spent a lot of time interviewing Schumacher over the years and he is a wonderful guy to talk with — so when he was talking about working with Kiefer it was not just great stories I was getting, but a better understanding of Kiefer through someone who had worked with Kiefer during the ups and the downs of his career.”

AP » Kiefer and his father are probably two of the more well-known Canadian actors working in Hollywood. Since Kiefer only spent part of his life here, do you think he considers himself a true Canadian? And do you know if he spends much time in Canada these days?

CH » “Kiefer is a devout Canadian — just this past year at the Toronto International Film Festival he came to Toronto to volunteer as the Chairman of the Actors Conservatory at the Canadian Film Centre — he is a real champion of Canadian talent in Los Angeles as well — if you look at the credits of 24, any season of 24, both the in front of the camera credits and the crew credits, you will see many Canadians there — that is due largely to Kiefer’s influence.”

“And he does come here quite often. His mom, Shirley Douglas, lives here and Kiefer owns a couple houses here in Toronto, but he also likes the Windsor Arms Hotel as a place he can come to here and be anonymous, not to mention Flo’s diner in Yorkville.”

AP » Was there anything you found out that didn’t make it into the book?

CH » “No, I pretty much poured everything I could learn about Kiefer into the book — I did, with the full agreement of my wonderful editor Tim Niedermann, tone down the descriptions of Kiefer’s numerous playful drunken antics, because after a dozen or so such descriptions they just became boring. Other than that, what I discovered went into the book.”

Christopher Heard is a frequent contributor for The GATE. His next book, Little Girl Lost: Money, Fame, and Britney Spears, is due out in stores in April.