#EscapeAndDiscover with the 2017 Ford Escape: Sarnia to Owen Sound

Weekend road trips are the best kind of adventure, and on Saturday I had a fun trip out of town, right here in Ontario’s glorious back yard thanks to Ford and the 2017 Escape. The real adventure might just be that I had no idea where Ford was going to send me though right up until I left my door, but I knew I was in for something special with their #EscapeAndDiscover weekend.

Read the story below, then check out the gallery, the video, and the tweets.

[dropcap size=big]O[/dropcap]n Saturday morning, with my bag packed and my camera in hand, a car arrived and took me to Toronto’s Thorncrest Ford on the Queensway. There were 11 other writers, bloggers, and photographers there, plus reps from Ford, and after a few snacks we were sent on our way in four teams, each headed to different parts of the province.

Team Green (my team), flew to Sarnia where we got into a 2017 Ford Escape and drove to Owen Sound to explore as much as we could on the way up. (Naturally, that meant we needed a hashtag, so I suggested #FordTeamGreen.)

Team Blue flew to Sudbury before driving to North Bay, Team Pink were flying to Ottawa and then driving to Kingston, and Team Yellow caught a flight to Thunder Bay and explored the area including Sleeping Giant. 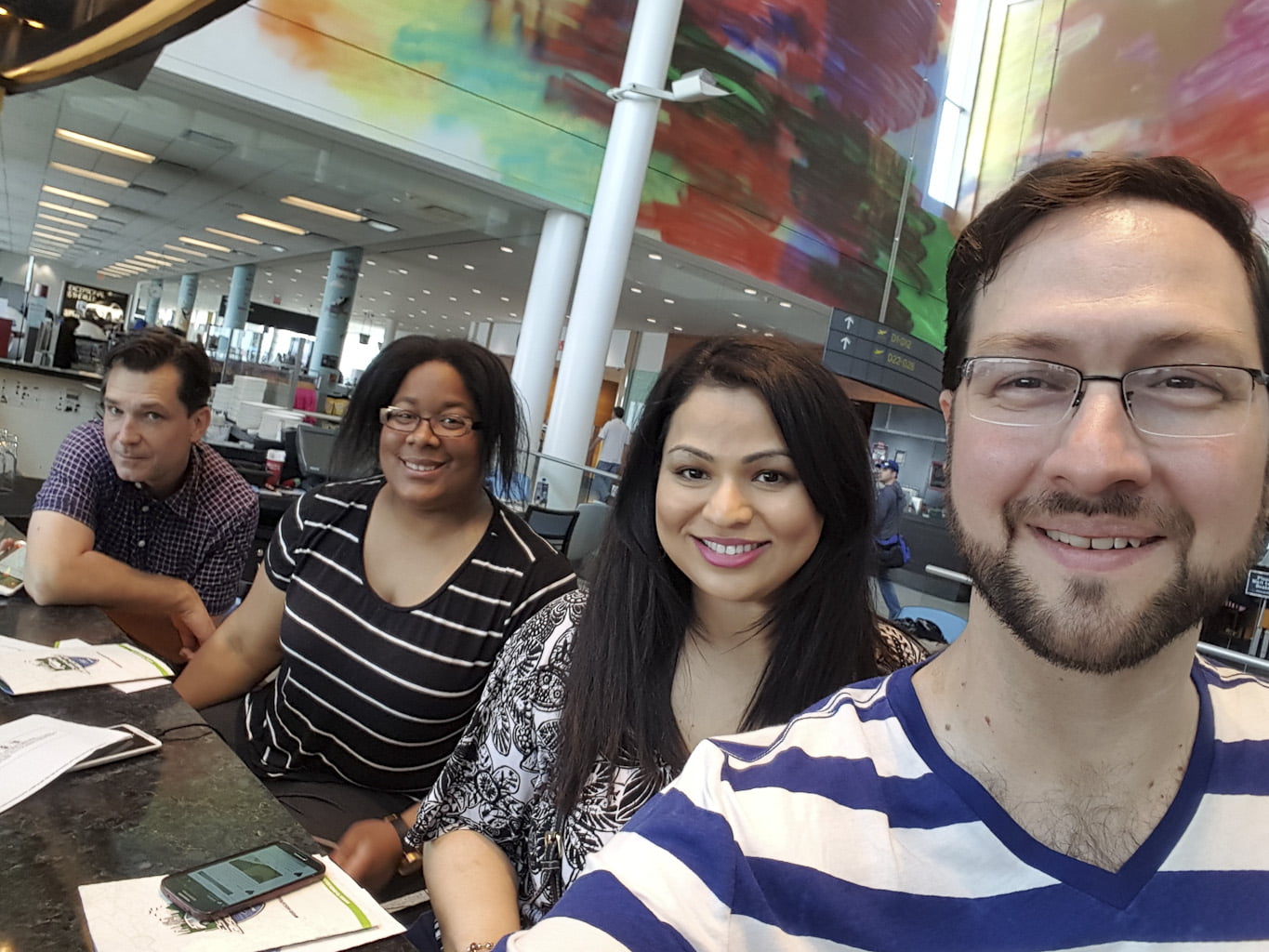 And that’s where the real fun began. Team Green were whisked away to Terminal 1 at Toronto Pearson International Airport where we caught a flight to Sarnia.  Waiting for us at Sarnia’s Chris Hadfield Airport was our brand spankin’ new 2017 Ford Escape Titanium Edition, in Canyon Ridge, which is a burnt orange colour. We got a tour of the vehicle and found out about the features, and then I drove us into town for a snack and to check out the Stones ‘N Bones Museum.

The first feature I fell in love with in the Escape, on the short drive from the airport to downtown Sarnia, was Ford’s Sync 3. I’ve used the system before–which includes the radio and navigation–but it’s still one of my favorite systems on any brand of car because it’s so simple to use, it looks great, and it’s very functional. When you need it, it just works, and it works well.

I’m also a big fan of the sunroof/moonroof, which makes the SUV feel even more spacious and sunny.

At the museum we had a quick tour, and frankly the place was kind of surprising. Stones ‘N Bones looks small, but it’s pretty big, and it’s packed with fascinating fossils, bones, gemstones, and more. Plus, their guides know everything about the collection, and they have a lot of fascinating stories to tell about where it’s from, or the history. They even have one of the biggest cut topazs in Canada, and a huge Narwhal tusk that’s the largest in Canada. And the owner, Jim Richards, is a lot of fun to chat with, if you get a chance to meet him. If you’re lucky enough to be introduced, ask him if he’ll show you his incredible ring.

After the museum we grabbed a few iced coffees and headed down to the waterfront trail for a few photos before we got on the road and headed to Owen Sound. We had been a bit delayed, so we didn’t have a lot of time on Saturday to explore, but we made the most of the day and took time to enjoy the drive up on a gorgeous Saturday that really felt like the peak of summer. It was wonderful, and Team Green got along like we’d known each other for years. Carson even managed to convince me to start using Snapchat.

The drive to Owen Sound also introduced me to my favorite feature on the new Titanium Ford Escape, and that’s the adaptive cruise control. Once you set cruise control, the car will monitor slower moving vehicles ahead of you, and keep a safe distance. So you can set your speed and the car will keep you moving with the flow of traffic, rather than having to turn off cruise control just because you’re following other cars. For long trips, and especially road trips, it’s a nice new feature to have to just make driving that much easier. 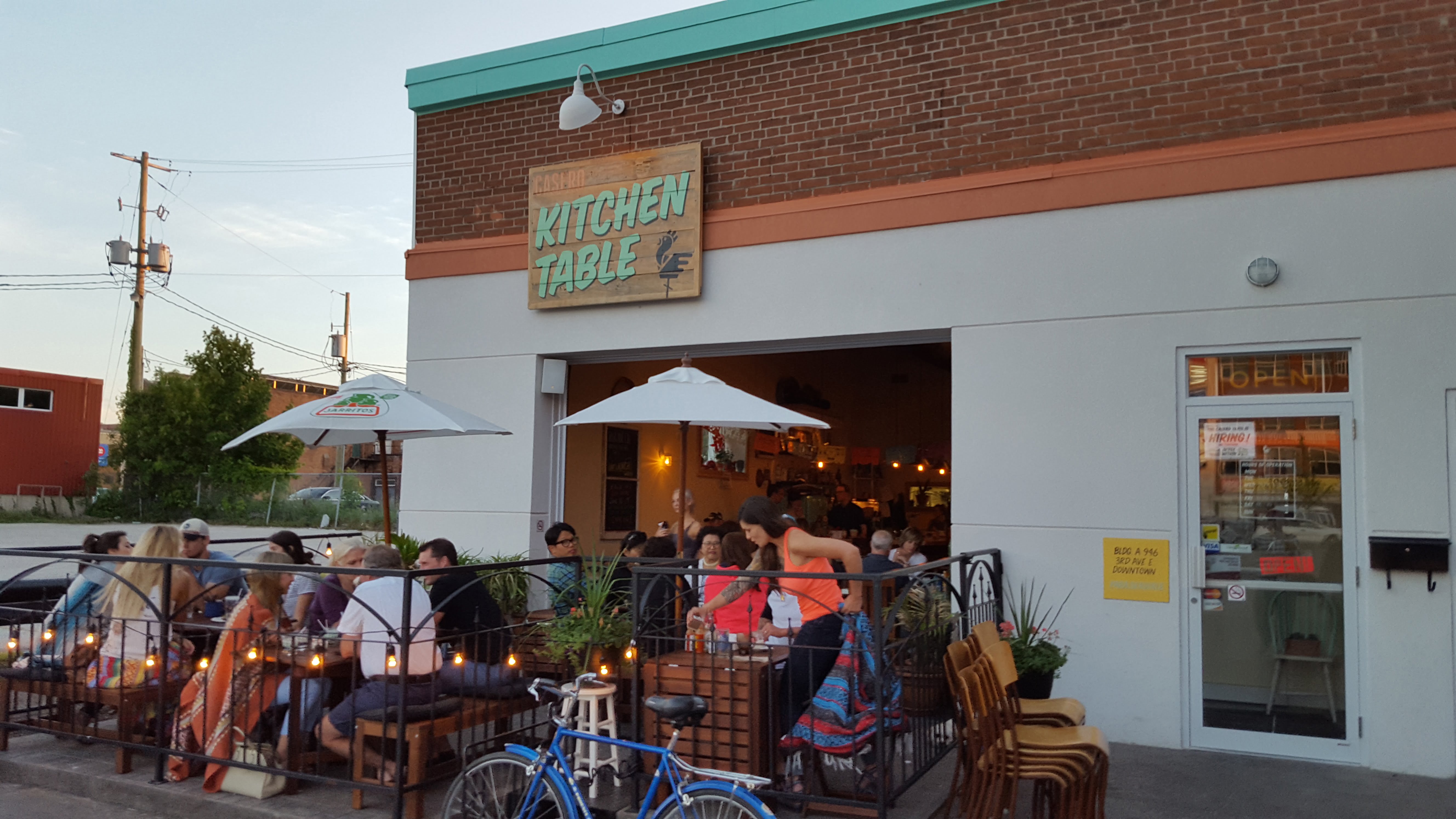 Once we arrived in Owen Sound, we checked in to our hotel before heading to supper at the charming and tasty Casero Kitchen Table, a Mexican restaurant that has fantastic food and a fun vibe. I was a big fan of their nachos and quesadillas, and their really delicious mini churros that come with a rich and slightly dark Mexican chocolate sauce for dipping. I wish the place was in Toronto, actually, but it’s a great stop for something different in Owen Sound.

[dropcap size=small]T[/dropcap]he next morning we got up and went to another charming food destination: the Dragonfly Cafe. It looks unassuming, but inside it’s nice and cozy with a wonderful patio to catch a few rays, and their menu and home cooked treats and breads are amazing. It’s also great for cheap eats, and I loved the French Toast. Everyone was really impressed with the food and the staff, and it was actually hard to tear ourselves away, but adventure awaited.

So we got in the Ford Escape and set our sights on Sauble Beach, which was a nice little drive from the cafe, giving us another chance to try out features and see the area. When we arrived at the beach, it was cool but bright and sunny, and we stopped to snap photos and enjoy the view, which was clear and like something out of a painting. In the wind a kitesurfer was having a blast, and we got some really gorgeous shots of the Escape on the sand and by the Sauble Beach sign. In the sunshine the Escape’s Canyon Ridge colour really beams and glitters–it’s eye-popping next to the blue waves and white crests. 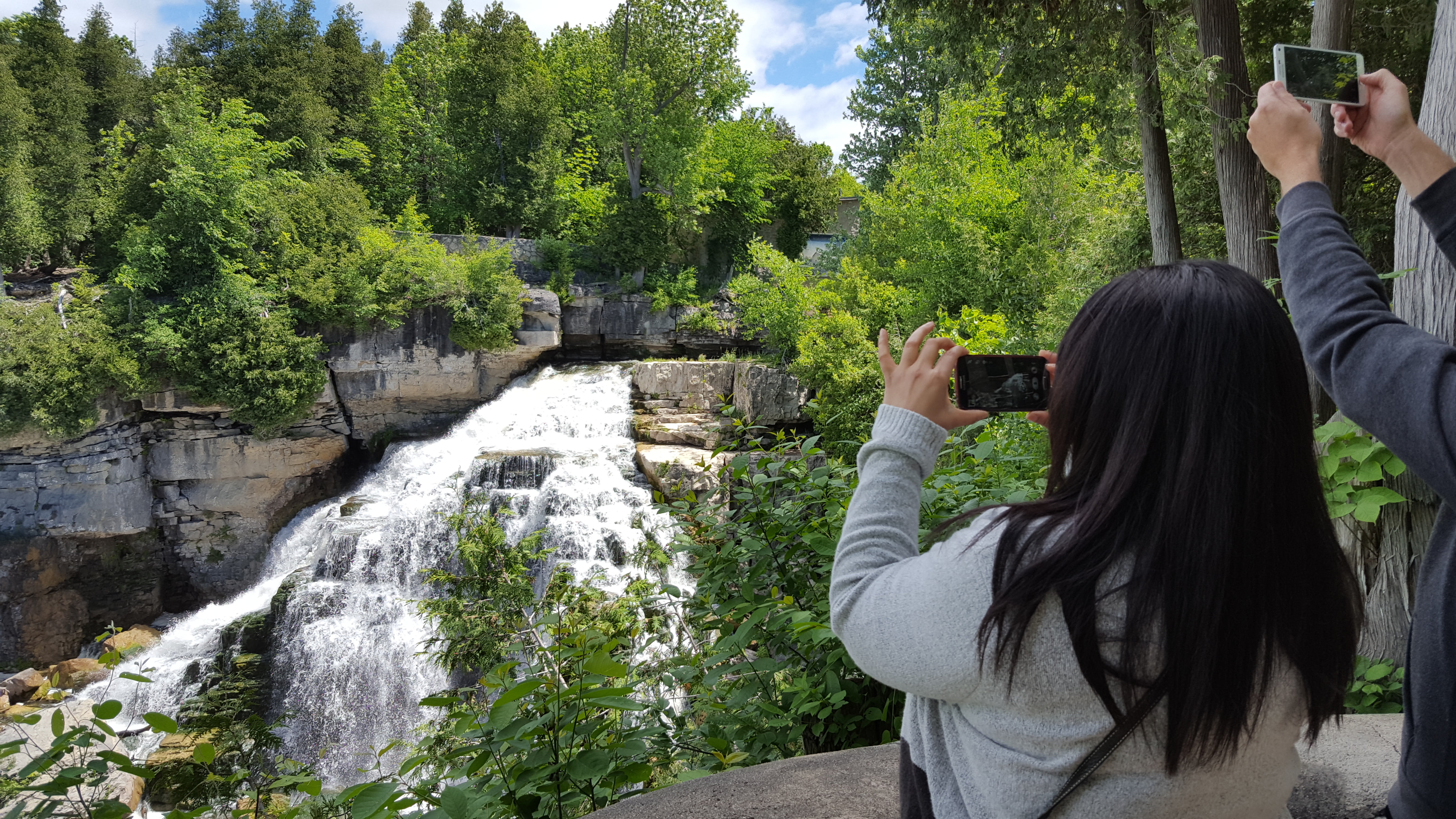 Moving on, we drove to Inglis Falls, where we took a few final shots together as a group. It was a beautiful place, and I’m looking forward to taking my family there for a picnic and a hike some day soon. There was also just the perfect vantage point of the falls if you went a little further along the path. Standing there you could really take in the roar of the water, and the striking scene. The falls are not gigantic, but they run clean and clear, and really glistened in the bright sun, with just a few white clouds to make it truly scenic.

Driving to Owen Sound’s airport, we got ourselves packed up from the Escape and headed in to meet our pilots–it was the last big highlight for our trip. From Owen Sound we were flying back to Toronto on a chartered plane, and it was like being VIPs for a little while. The pilots loaded our bags into the turboprop plane and we seated ourselves and were in the air in just a few minutes. We snapped a few photos, and before we knew it we were nearly there–in a plane like that it’s a very short flight around southern Ontario. I think from take off to landing we were only in the air 25 minutes or so, and then we taxied into a private hanger and cars picked us up to take us home.

Team Green logged about 300 kilometers in our Ford Escape, and we had a blast the whole way. Carson was a fantastic leader, and we snapped photos everywhere we went–I took around 350 photos and about 30 HD videos along the way.

Now we’re just waiting for a reunion dinner on Wednesday where they’re handing out a few prizes for the best photos, and a lucky follower could also win the same prize. If you haven’t already, like, share, and retweet some of my tweets below and you could win a $500 gift card for Air Canada.

Thanks once again to everyone involved in this fantastic weekend experience. #EscapeAndDiscover was a lot of fun, and easily one of this year’s highlights.

Here’s a quick video of our weekend, and stay tuned for a longer 4K version coming soon.

#FordTeamGreen is parked by the dock of the bay in Sarnia catching a breeze and some rays. #Ford #EscapeAndDiscover pic.twitter.com/JuOqfegjV3

We just had the most amazing experience. Private plane from Owen Sound to #yyz! ?? #EscapeAndDiscover #FordTeamGreen pic.twitter.com/70pmvg38Oz

Where can you go and what can you...