The Lunar Rogue’s Frank Scott sits down to talk whisky, the NB Spirits Festival, and his favourite dram 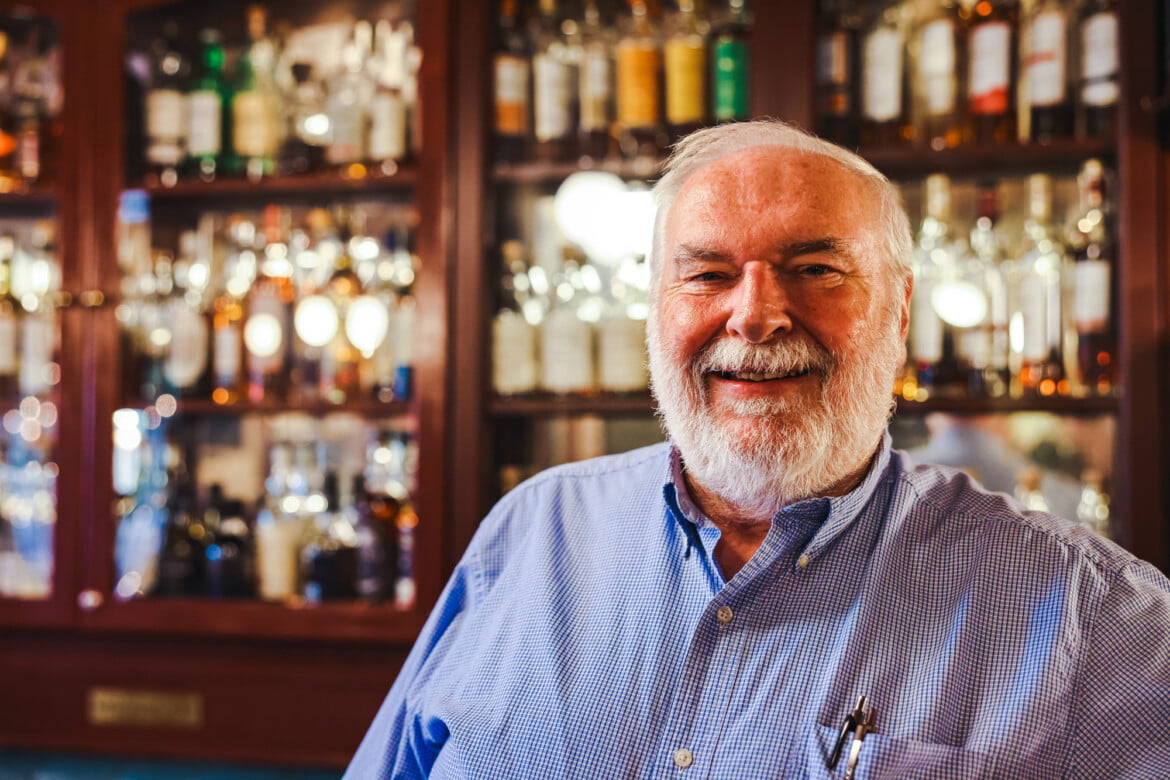 Whisky is one of the greatest and most complex spirits of the world, and for Frank Scott, the Chairman and Founder of the New Brunswick Spirits Festival, it’s a passion that earned him one of the top honours in the industry.

Scott opened Fredericton’s Lunar Rogue Pub in 1989, and while it started as a hangout for beer and a bite to eat, it only took a few years to become the province’s most well-stocked whisky bar, leading to the start of the Canada’s first whisky festival.

Both the Rogue and the Spirits Festival have earned a lot of fans over the years, and that’s at least part of the reason that in 2015 he was named The Keeper of the Quaich, one of the top honours in the whisky world. Thanks to his passion, knowledge, and the way he’s shared his love for the spirit, Scott has rubbed shoulders with some of the top distillers, experts, and whisky lovers in the world.

As Scott put it, “whisky has opened doors that I never thought would ever open for me, and I had a lot of fun doing it. It’s mostly sharing and talking about that passion.”

Since he started, he’s travelled all over Scotland, and visited distilleries around the world, and he’s shared his love of whisky with a lot of people.

The Rogue, and the spirits festival are born

Scott’s first major step towards starting the festival was in 1989, opening the Rogue with co-owner Brian Freeman. “At first we collected beer bottles… and then we started selling single malts.”

At the time Scott had to convince NB Liquor–the government agency that’s responsible for spirits in New Brunswick–to even start stocking better whiskies.

“They said, ‘You know, people aren’t going to buy them.'”

He had the perfect solution, it turns out. “‘How about we start a festival and we attract people who are interested in whisky and we start a show together?” Scott said, and that first event led to over 250 tickets being sold, and sales of over $5,000, with a brand ambassador coming in from Johnnie Walker in Scotland.

The event was so successful that NB Liquor was thrilled to start planning the next year’s even right away. Now, celebrating the event’s 25th festival, it’s one of the top in the country.

“It’s grown into a major event. If you asked a lot of the brand ambassadors, they would say that the Fredericton and the Victoria Show were the two best whisky festivals in Canada. We do some really unique things at our festival that no one else in the world does.”

First and foremost, since the festival is in a smaller city, everyone who attends a masterclass at the festival gets a free cab ride home. Scott says it’s what makes them the “most responsible spirits festival on the planet.”

The festival also brings in a wide range of products, including bourbons, Canadian whisky, Scotch whisky, single malts, and more.

“We’ve expanded into tequila and rums, so this year the festival will start with a rum dinner featuring five expressions of Flor de Caña rum with a five course dinner. The brand ambassador will host the dinner with samples and pairings, [and then] we do a whisky dinner with our world-leading expert, Martine Nouet, pairing food with whisky.”

For the last decade, Nouet has been attending the festival, and she’s one of many passionate whisky lovers who come every year, including whisky clubs, ambassadors, and aficionados.

This year the festival is also working with the Beaverbrook Art Gallery curator John Leroux for Whisky & Art: A Feast for the Senses that features six whiskys with six pieces of art.

“We pair whisky with art, and it’s visual in the sense that you get the full feast for all of your senses: your nose, your eyes, your ears, you taste, and you’re visualizing maybe a seascape with your nose in a smoky whisky and the saltiness of the ocean coming through.”

During the five-day event the NB Spirits Festival will highlight whisky and spirits from around the world, including Glenmorangie, Ardbeg, The Dalmore, Aultmore, Forty Creek, Teeling, and dozens upon dozens of others.

If you ask Scott, he’s sure that it’s the hospitality of the east coast, and New Brunswick, that makes the festival so charming for whisky lovers.

If you want to start from the real beginning of the festival and Scott’s passion, his love for whisky goes back to his days in music when he used to play in a pipe band.

“We used to travel to Scotland to compete at the world championships, and I got a little bit hooked through the Burns supper with the whisky and bagpipes, and I started to really get into it and enjoy the flavors and the uniqueness; the fact that there were so many distilleries to visit and check out.”

“Over time, I started building more and more of an interest and a small collection, and I used to get the guys in the band to bring a bottle back for me.”

Scott has worked for over 40 years in the industry, and every year he and his wife visit the spirits festival in Speyside. Last year he was even invited to be a judge for North America, which he called “quite an honour.”

It’s also safe to say that meeting his wife was a big reason why he fell in love with whisky.

“I met my wife in Scotland,” he said. “She was a director of residences for Queen’s College in Glasgow and the band was staying there. She was filling in for some of her staff around a summer holiday.”

When he asked her out, he ended up taking her to a distillery, and that’s where they had their first date and hit it off.

The Keeper of the Quaich

After years of teaching people about whisky, sharing his passion, and travelling the world as an ambassador for spirits, he was invited to Blair Castle in Perthshire in 2015 to be inducted as a Keeper of the Quaich.

The “exclusive and international society recognizes those that have shown outstanding commitment to the Scotch Whisky industry,” and only 40 people from around the world are inducted each year. Today there are only about 30 members of the organization in Canada, Scott says.

After a lesson from Scott on sampling a great whisky properly, I had to find out what he considers his favourite.

“I’m a Mortlach guy because I love worm tub whiskies. There are 18 distilleries in Scotland that have worm tubs, and I love every one of them.”

“Because it’s a much larger vessel for condensing, and where a copper jacket condenser removes [some flavours], a worm tub is lot slower and you get a much meatier spirit, so it’s got a lot more texture.”

“Mortlach is called The Beast of Dufftown because it’s distilled two and a half times. They have a small still called the Wee Witchie, and they put a portion of the distillate through this wee still that adds this unique flavor to the whisky, and it’s used a lot in Johnnie Walker.”

The Rogue has also offered whisky lovers a great resource to find new favourite expressions. The Rogue’s Whisky app is available for Apple and Android and lets you search by categories, types, or regions, and includes tasting notes on over 900 whiskies. It works as a handy menu when you visit, to find anything the pub may carry, but you can use it from anywhere to look up something new to try.

The 2022 NB Spirit Festival is from November 15 to 19. Tickets are available on their website at whiskynb.ca, and the next time that you’re in Fredericton, be sure to visit the Lunar Rogue for a dram of your favourite whisky.

7 things you need to do in Chicago