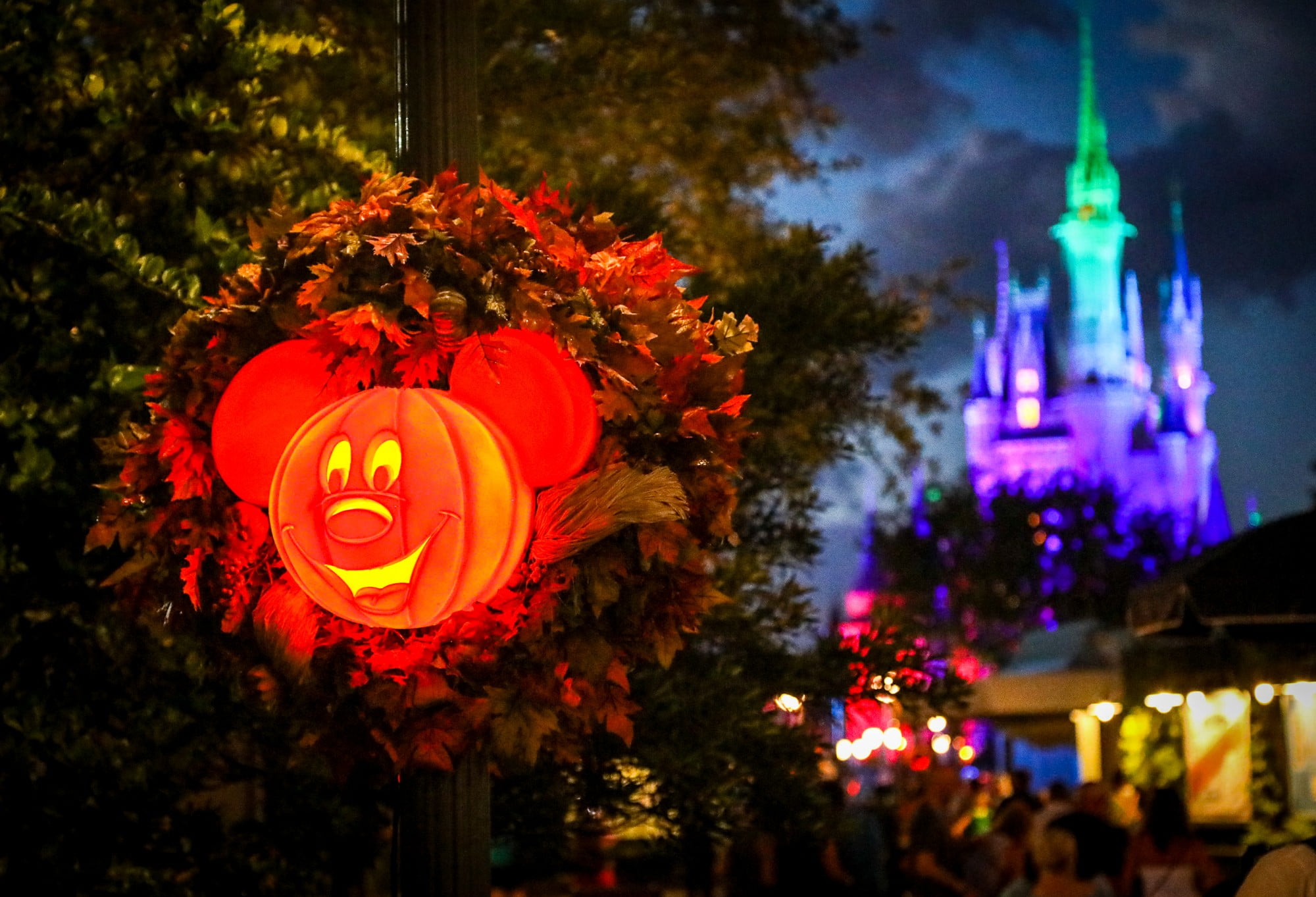 Halloween is one of my favorite times of year. Pumpkins! Candy! Costumes! What’s not to love? If you’re a Halloween fan, and you happen to be a fan of anything Disney, Mickey’s Not So Scary Halloween Party at Walt Disney World is a must-see event, and it’s on now until November 1.

Mickey’s Not So Scary Halloween Party is a night-time event at the Magic Kingdom that features a whole lineup of special events and activities around the park. The specially ticketed event, which starts at $74 per ticket, transforms the Magic Kingdom into a cutely-spooky playground that’s also fun and friendly, for kids and adults.

Want to go trick-or-treating? There’s sweets and candy stops around the park.

Do you or your kids like parades? Mickey’s “Boo-to-You” Halloween Parade is a heck of a lot of fun with characters from nearly every era of Disney.

What about fireworks? Yep, Happy HalloWishes Fireworks are part of Mickey’s Not So Scary Halloween Party too.

And there’s the Hocus Pocus Villain Spelltacular stage show. Right in front of Cinderella’s Castle at the Magic Kingdom, the show features favorite villains and songs, including the witches of Hocus Pocus, Oogie Boogie from The Nightmare Before Christmas, Dr. Facilier from The Princess and the Frog, Maleficent, and a few other surprises. It’s a great show, especially if you love the Disney villains, and some of their songs.

When my family and I went to the party we had a blast, and we didn’t want to leave. The mood was fun and festive, the park was busy, but manageable, and there was a lot to do. All of the rides run during the party, including the Haunted Mansion, naturally, and there are meet-and-greets with characters all over the Magic Kingdom.

There are a few great things to know before heading out to Mickey’s Not So Scary Halloween Party. Here’s my list of tips and tricks to get the most out of the night. Have a question I didn’t answer? Feel free to send me a message on Twitter or in the comments at the bottom. 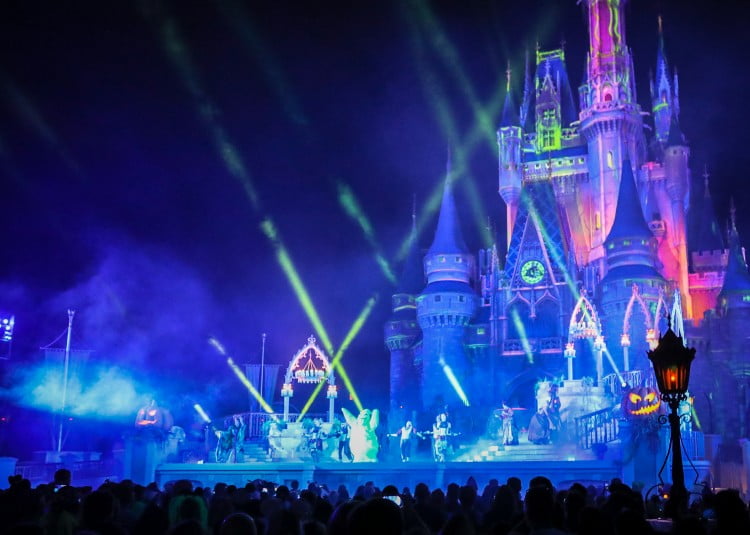 Mickey’s Not So Scary Halloween Party starts at 7 PM and goes until midnight, but you can enter the Magic Kingdom as early at 4 PM. To take full advantage of your time, plan to either visit another park in the morning, if you’re doing Walt Disney World already, or take it easy and then get to the park early. If you take it easy, staying late may be a bit easier, especially if you have little ones.

Personally, I think October is the time to visit to get the full Halloween effect, but the event starts each year in August, and goes usually until November 1, so there are a lot of options.

Disney has a few rules for dressing up, and to start with, costumes have to be family friendly. If it’s a character who might be in a Disney movie, then you’re good to go, but avoid anything too violent or revealing.

I would also recommend avoiding heavy or hot costumes unless you can stand the heat. Orlando can be quite steamy, even near the end of September, so unless the weather is going to be cool, it’s not a lot of fun running around the park in something warm.

For kids under 13, they can wear partial masks, as long as they don’t cover their face. Otherwise masks are not allowed. For anyone over the age of 13, no full-length outfits that may drag are allowed, including princess dresses, and only short capes are allowed.

Otherwise, you can bring simple props, like a lightsaber or a plastic sword, as long as it looks like a toy.

When you arrive at the party, you’ll be handed a bag to gather candy and treats, and there are 11 places around the park in 2017 to collect. While these are abundant, they tend to be a bit busier earlier in the night, so plan to trick-or-treat before you leave. That means you also don’t have to carry a bag of candy around with you all night, and some of the Disney castmembers at the park may be a bit more generous near the end of the night.

Many of the character meet-and-greets at Mickey’s Not So Scary Halloween Party are fun and quick, but it depends who you want to see. Lining up for Mickey Mouse or Captain Jack Sparrow may not take too long, especially if you arrive early, but some of the lineups can take the better part of the night.

My family and I are big fans of Jack Skellington and Sally from The Nightmare Before Christmas, and our daughter was incredibly excited to meet them too, so we lined up to see them at Liberty Square, which is where they will be again this year. We arrived after dark, which meant that there was already a bit of a line for Jack and Sally, so we ended up waiting 2 hours to see them.

Since my daughter was thrilled about the whole thing, and barely said a word about waiting, it all worked out, and Jack and Sally really are a delight. They take a lot of time to be with their fans.

Still, if you want to enjoy a lot of what the night has to offer, keep in mind that you may have to wait a while for a few of the characters. The earlier you line up the better for these special characters, who don’t appear at the Disney parks frequently, but you could still have a long wait. I’ve heard the same thing said of the Seven Dwarfs. 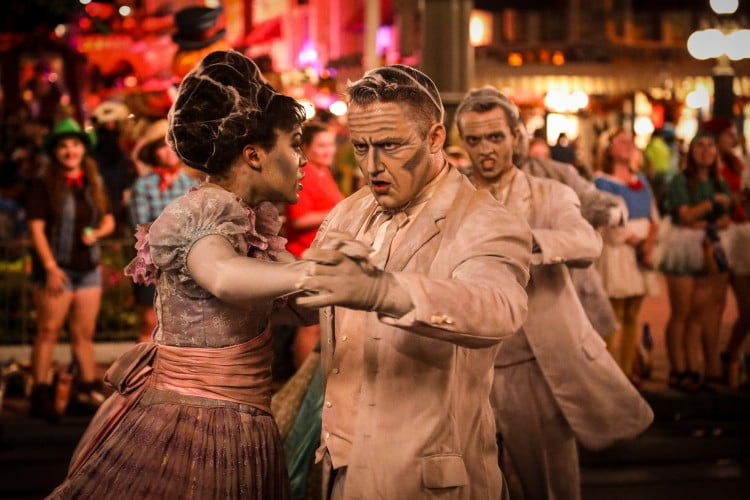 This really is a treat, and it happens twice a night, so if you miss it the first time, you can catch it later.

First off, the song is so catchy, you won’t get it out of your head for days. It plays on repeat throughout the parade and somehow it just gets catchier.

There are a lot of characters on parade–Peter Pan and his friends ride out as Captain Hook’s prisoners on the Jolly Roger, there are undertakers and ghostly dancers, the too-cool Skeleton Band, and all sorts of silly fun on display. The characters also interact with the crowd a lot, so if your little one likes someone in particular, they may get a wave or a fun reaction. 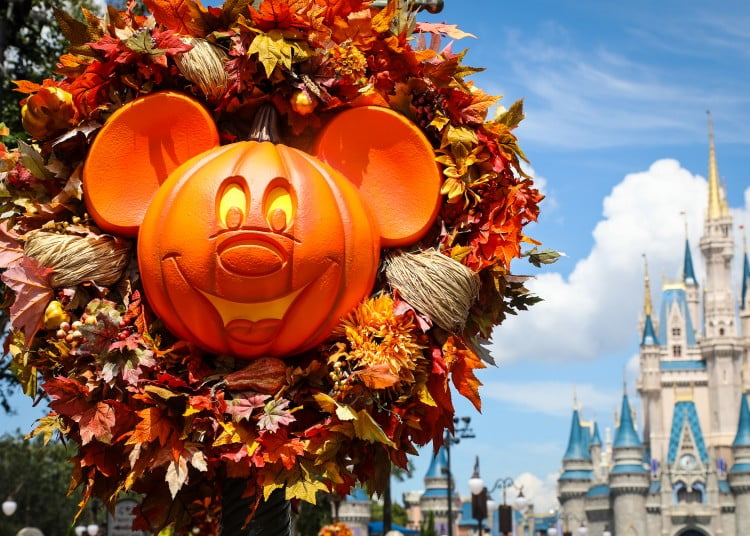 Mickey’s Not So Scary Halloween