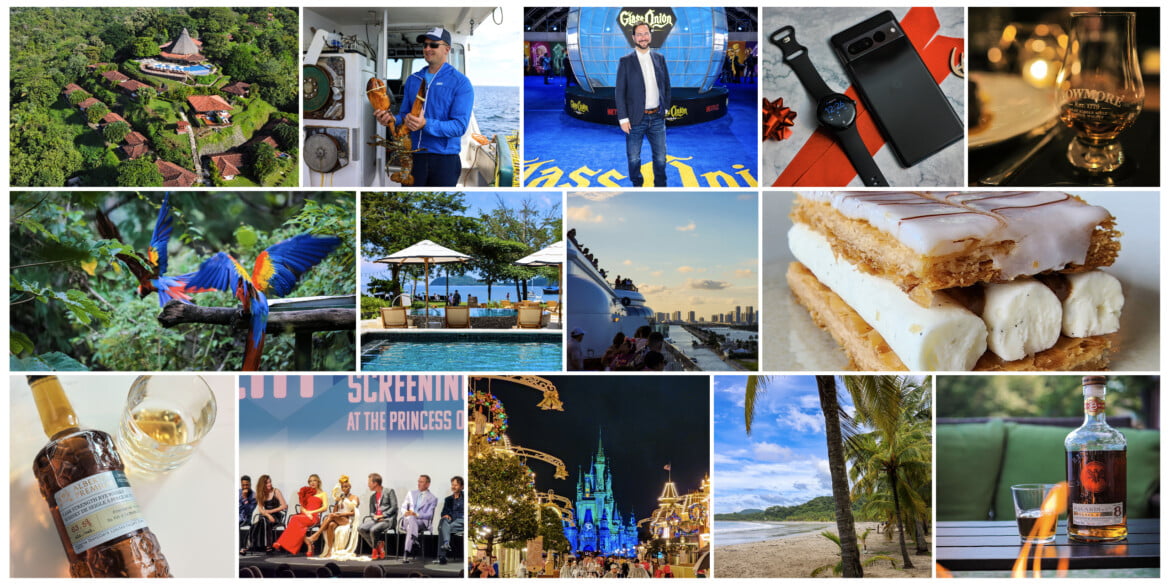 The New Year always makes me think about what I’m leaving behind, and 2022 was the best year of my career. In all the years I’ve been running The GATE (21 so far, to be exact), I never really expected anything like it, but it’s going to be very hard to top for a lot of reasons.

There were so many interviews, with so many iconic actors and talented people. I had the chance to really start to dig into travel and explore more, as I focus more on creating stories and video about destinations near and far. And I had the chance to check out some really cool new tech and gadgets.

Without any further ado, here’s my recap of all the things that made 2022 a very fulfilling year. I also shared a quick video recap on TikTok, YouTube, or Instagram.

The pandemic made my family and I realize how important travel is to us, and it’s something I’ve wanted to write about more. Last year we had a couple of great trips, but in 2022, and working with a few destinations, I travelled way more often.

The highlight of the year was Costa Rica. A trip that I hope to do again in a few years. The country is an oasis of calm, beauty, and green. It’s so beautiful, the food is amazing, and the “Pura Vida” lifestyle is so refreshing.

We learned so much from the trip, and we stayed at the Hotel Punta Islita and the El Mangroove Hotel, two stunning properties that made us feel so welcome. From the hotels we had the chance to watch sea turtles as they hatched and then made their way to the water, and we learned how the Macaw Recovery Network is diligently working to bring the parrots back from the brink of extinction in the wild. It was an incredible trip, with so many highlights.

In the spring we went on our first cruise, a four-night trip on the Disney Dream from Port Canaveral to the Bahamas, Castaway Cay, and back again. We had planned the trip in 2019, and finally had the chance to go in April. We had such a great time that we booked a second cruise with Disney for October with more of the family, this time departing from Miami, and that was also an amazing adventure. We’re looking forward to more cruising as soon as we can.

Our travels took us through Orlando a couple of times, first for the cruise, and then a trip to Walt Disney World (and the wonderful Boardwalk Inn) in May, and we decided to drop in one more time in the fall, after the second cruise, to check out Mickey’s Very Merry Christmas Party. All three trips were a treat, and I may just have to go back again to Orlando for a few more things that I want to do.

In June I also had the chance to visit Nova Scotia and New Brunswick for the Travel Media Association of Canada conference in Yarmouth. I ended up making it a road trip, flying to Halifax, then driving to Yarmouth, and after a few days I took the Fundy Rose ferry from Digby to Saint John.

I’ll be sharing those stories in the spring, including the second trip I took to New Brunswick in the fall when I drove the GMC Acadia AT4 from Toronto to Fredericton, and then on to Saint John to explore more. New Brunswick is one of my favourite places, so I’ll happily go back any chance that I get.

Another huge highlight for travel and film was visiting Los Angeles in November for the premiere of Glass Onion: A Knives Out Mystery at the Academy Museum. I interviewed producer Ram Bergman, and while I was there I also went to Beverly Hills for the first time and decided to sit down for a bite at the famous Beverly Wilshire’s Blvd Lounge. It was such an amazing trip.

And I was in New York twice in 2022! In August OnePlus invited me to their first in-person press conference for the launch of their latest phone, and that gave me a chance to explore some of my favourite places in the city while photographing everything with the OnePlus 10T.

Then, just a couple of weeks ago, I went back for the premiere of Guillermo del Toro’s Pinocchio at MoMA. It was the first time seeing New York City all dressed up for Christmas, and it was amazing. A huge thanks to Netflix for that invite, and the Glass Onion premiere in LA too.

The biggest interviews of my career

There were so many highlights from 2022, and the biggest were the interviews. I’m still amazed at all the wonderful talent that I had the chance to speak to this year.

At the top of my list, I chatted with John Boyega at TIFF about working with director Gina Prince-Bythewood and star Viola Davis for The Woman King. It was one of the best interviews of the year.

I also spoke to Eddie Redmayne for his chilling role in The Good Nurse, I interviews Guillermo del Toro for Pinocchio, Chiwetel Ejiofor for The Man Who Fell to Earth, and the list goes on!

That list barely covers it, but it’s all just to say wow and thanks to all the people that made these amazing interviews happen. I’m so grateful.

There are very few things as fulfilling as a great conversation with talented people about their work, their creativity, and what inspires them. The icing on the cake is when you get to interview people you admire.

Here’s hoping 2023 brings more opportunities for more epic conversations, especially if some of those are on set, and at in-person junkets once again.

A few of my favourite (tech) things

This has been a really interesting year for consumer electronics, gadgets, and devices, from phones and tools for creators, to TVs and even cars.

While I missed CES this year, and I’ll miss being there in person for 2023, I’ve had the chance to cover a lot of awesome things.

Google, OnePlus, and Samsung all launched great new phones throughout the year, and I had the chance to attend OnePlus’ announcement in person in August. I’ve also been following DJI and Zhiyun’s latest devices (and I’m currently testing out the later’s Fiveray F100 and M40 lights, and I’m waiting for the Smooth 5S), not to mention the very handy Hollyland Lark C1 wireless mic system.

I also met with racer Daniel Morad to check out Samsung’s Neo QLED 8K Racing Simulator, and I profiled a bunch of amazing tech and gear for creators for the holiday gift guides.

And I tested out the Gozney Dome pizza oven, one of the best outdoor cooking appliances that I’ve ever used. I still can’t believe the steak or the pizzas that I made in that oven.

If anything changes for 2023, I’m actually expecting to cover more tech, since I see so many opportunities to create more video content to share on social. You can watch my tech video recap for 2022 on TikTok.

And so much more…

Before the Scotch debuted in Canada, I sampled Bowmore’s latest special edition whisky in partnership with Aston Martin, the Masters’ Selection Edition 2. What a beautiful spirit, where I also had the chance to meet the incredibly talented creator Betty Shin Binon, AKA Stems & Forks.

I also recapped the first decade of The GATE and scanned hundreds of photos, and digitized piles of old video from my humble beginnings. I spoke to the Lunar Rogue’s Frank Scott about the NB Spirits Festival. And I got to find out what makes Global Citizen such a vital, roots-driven advocacy group. Again, that barely even covers it all.

This year, I sampled new whisky and spirits, made a lot of cocktails, gave away lots of goodies to The GATE’s readers and followers, and I’m sure I’m missing a lot of other things I just can’t think of right now. It’s all a wonderful whirlwind, and I’m frankly very proud of it all, and very proud to work with so many people who make it all possible.

And, last but not least, I took hundreds of photos. I picked out a few of my favourites that I had to share, so check them out below.

If you’re feeling generous, and aren’t following The GATE already, you can find all our social links right here.

Thanks so much for reading! I hope you’ll come back again in 2023!